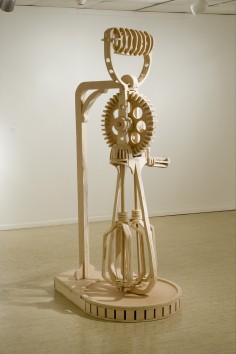 This Eggbeater by Shannon Goff catches the viewer’s attention by its sheer size. Also, the content of the sculpture, an eggbeater, is striking in such a large display. Few people have ever noticed the intricacies of an eggbeater, except perhaps those who engineer the machine. Thus, seeing such a large rendition gives importance to each wheel, each connection in this mundane contraption. The size also conveys an idea of importance, to an object we would not ordinarily think of as particularly important. Moreover, the material used, plywood, gives the eggbeater another interesting quality. Obviously a real eggbeater would never be made out of plywood, thus the sculpture in some ways become something else entirely.
.
.
.
.
.
.
.
source: shannongoffinfo

Shannon Goff, assistant professor of sculpture and ceramics, is currently participating in a group exhibition at Susanne Hilberry Gallery in Ferndale, Michigan, which runs through November 3. In the recent past, her work has been representational, stylized translations of ordinary or extraordinary things—a Bell 47 helicopter built out of cardboard, or an exaggerated rotary phone constructed entirely out of porcelain. Her most recent work, however, embraces abstraction and is heavily rooted in the practice of drawing. Still pushing the limits of a particular medium, these more intimately scaled ceramic sculptures seem much more intuitive, meandering, and free. Drawings in space, they may suggest landscape, architecture, or various networks and mapping. Shannon received a B.F.A. from the University of Michigan, pursued post-baccalaureate studies at Kyoto Sienna University in Japan, and received an M.F.A. from Cranbrook Academy of Art in 2003. Her work has recently been included in exhibitions at Colorado State University, the Free Museum of Dallas, and in Beijing, Berlin, and Chicago.