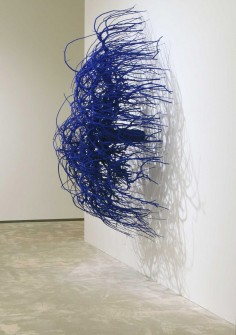 If this is true, then works by Dark in this show must have a striking effect on many. Echoing the vibrancy of Pop Art and the scale of Minimalist sculpture, the work of Shayne Dark in Here and Gone, is punchy, crisp, and is full of compromises.

Looking around the gallery, it is easy to see patterns in the forms, materials, and treatment of the work. For example, On Fire and Blizzard share similarities in all three of these areas. It is in the hue and presentation, that the artist creates radically different effects. Playing with fixed and dependent variables helps Dark to open the viewer up to one of his main interests, the plurality of perception. Emphasizing the details of the surface, how the interrelation of individual parts, and the overall feeling of the work, is therefore key. In traditional, Canadian art history, the use of trees has been strongly linked with the representation of individuals (Think: Thompson’s Jack Pine ). Dark’s choice to tint the unrefined wood in his works with intense primary colours, black and white, is a physical appeal that invites and includes the perceptions and interpretations of all the viewers to the gallery. The use of primary colours and shades relates to their status as the basis for producing all shades- their primacy. It is through the primitive, basic, senses that Dark’s work initially connects with the viewer.

Very much interested by hue and scale, Dark draws on these formal qualities for their particular ability to elicit an emotional response from the viewer. Seeking to create a direct connection with the viewer then allows for the further layering of multiple readings of the work, a part of each individual experience. The overall exhibit incorporates both tension and balance, in the combinations of material and in the structure. In the structures, Dark has used natural and imposed forces- often in competition with one another. Whereas in the materials, there is a combination of natural and manufactured materials, most notably the various wood vs. refined metals.

There is a duality at play, that between the natural and the urban. It seems that in this age of post-Industrial Revolution, where we are plagued with the problems that surround finding a balance between these two worlds, Dark has found some common ground in the organic aspects of each, uniting the two in his oeuvre.
.
.
.
.
.
.
.
source: artmur

Born in 1952 in Moose Jaw, Saskatchewan.
Shayne Dark is a Hartington, Ontario-based contemporary visual artist who has exhibited widely both nationally and internationally since he began his artistic career in the mid 1980’s. Taking a keen interest in every aspect of the process of art production – insisting on the latter to the detriment of the finished object – his sculptural installations draws upon and focuses on the physical and perceptual experience we have of our environment. Meant to stimulate a spiritual or visceral reaction in the viewer, his works are a site of tension and often evoke the contrasts between the cultural and the natural worlds, industrial and organic materials, as well as between the notions of permanence and movement, space and time.
.
.
.
.
.
.
.
source: newzones

Shayne Dark’s work results from a rhythmic and organic process involving ideas, feelings, images, formal play, and structural necessity. Every aspect of the process has the potential to hold meaning, to draw upon and focus our physical and perceptual experience of the world.

Dark’s work is driven by the character of the material, but as essential as this physical aspect is, it is not the sculpture. For Dark, the sculpture lies somewhere between its clear identity as a physical thing and it psychological aspect; all that it suggests, evokes, or resembles. It is the embodiment of thoughts, feelings and attitudes.

Shayne Dark has been included in many publications, including reviews by the Globe and Mail, Canadian Art Magazine, The New York Times, The Washington Post, and ESPACE magazine to name a few. Dark has received various grants and awards, including the Ontario Arts Council ‘A’ Grant in 2009. Shayne’s work can be found many collections such as the Canada Council Art Bank, Ottawa, Queen’s University, Kingston Ontario and HD VISION Studios in California.