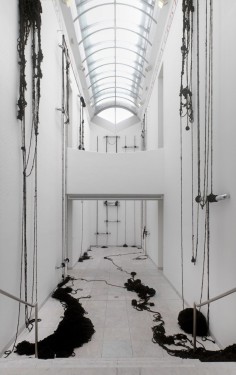 source: tateorguk
Behold 2009 is an immersive large-scale installation by the South Indian artist Sheela Gowda. This work consists of four kilometres of hand knotted rope and approximately twenty car bumpers. The bumpers are suspended against the gallery wall, individually or in sets, from ropes made of braided human hair, which are knotted around the metal. The ropes extend irregularly between the hanging bumpers in small and large loops, as well as being gathered on the floor in piles and heaps, some of which can also be suspended from the ceiling. In this way the installation can take over a single gallery space or occupy a single stretch of wall.

In Karnataka, where Gowda lives, the hair and car bumpers used in Behold are everyday materials with ritual significance. Short strands of human hair are commonly knotted around the bumpers of vehicles to ward off accidents and bad luck. The curator Trevor Smith has argued that these talismans gesture to human vulnerability, especially in relation to the hard steel of a car, as well as the potential of these organic fragments to summon protection or care. Trevor writes that the entanglement of hair and steel in Behold stages ‘a precarious pas de deux, inverting the conventional casting of the human body as the fragile partner to its metal machine cohort’ (Smith 2009, accessed 21 April 2013). Gowda commented in 2009 that the pairing of these materials is ‘a coming together of fear, superstition, belief and a need for comforting action in the framework of modern life’ (quoted in Smith 2009, accessed 21 April 2013).

Just as Gowda’s work references human beliefs and superstitions, it also relates to emerging economic systems in India. The steel bumpers, for instance, highlight the massive increase in popularity and accessibility of vehicles in Indian cities, a new car being an important indication of success in the expanding aspirational economy. Likewise, hair has an industry of its own: it is ritually shorn as a mark of humility and sacrifice when pilgrims fulfil sacred vows and donate to local temples, where it is then woven in talismans or sold by the priests for profit. Longer swathes of fine, untreated dark Indian hair are in high demand for wigs and hairpieces or for keratin used in beauty products, particularly in the West. As Smith notes, Gowda unweaves the short strands from the talismans, braiding it into the longer ropes that bear resemblance to the hair sold on the open market (Smith 2009, accessed 21 April 2013). With these hair-ropes she reconnects and entangles the ritual and secular economy, as well as mass produced and handmade objects. The tension between the different materials in Behold is evident in Gowda’s other works such as And Tell Him of My Pain 1998 (Walker Art Center, Minneapolis) in which she combines a length of one hundred needles with the red pigment kumkum.

In Behold, the shiny, clean metal forms of the bumpers stand out in relation to the dark, natural, organic material from which they are hung. The black ropes of hair are coiled into spherical and linear forms, veering between the abstract and the anthropomorphic. The linear quality of the ropes has a visual affinity to abstract drawing, but hints of the body are suggested in the formal arrangement of the work, including spheres that are reminiscent of heads, and loosely hanging loops resembling entrails. The tension between narrative and abstraction, as well as effort and restraint, characterises much of Gowda’s practice. The labour intensive nature of making, through braiding, knotting and coiling the hair, is evident in Behold and is a key aspect of Gowda’s process-driven practice and intuitive relationship with her materials. She has said, ‘I want the material to speak. At the same time it has to serve my purpose, I need to control it, to subvert it. Most of my works are labour intensive, but I do not like to make the process immediately apparent … I feel it adds to the intensity of the work while remaining seemingly simple and minimal.’ (Gowda in Bose Pacia Gallery 2007, p.145.)

Gowda trained at the Kala Bhavan School of Fine Arts at Santiniketan under K.G. Subramanyan and credits that experience for expanding her understanding of ‘the fundamentals of perception; the ways of seeing and how you read the formal elements in art through the ages as well as in traditional arts and craft’ (Gowda in Bose Pacia Gallery 2007, p.144). Gowda began her career as a figurative painter and moved towards sculpture in the 1990s as her interest in using indigenous and locally relevant materials grew. She exhibited Behold at the Singapore Biennale in 2011 and the Venice Biennale in 2009 and had a solo exhibition in London at Iniva (Institute of International Visual Arts) in 2010.