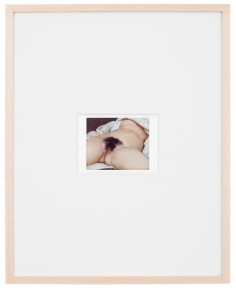 Sherrie Levine requires no exposition. If you weren’t around at the time when she introduced her seminal works, there are at least two anthologies, Art After Modernism: Rethinking Representation and The Anti-Aesthetic, that can serve as maps to the treacherous shoals of critical theory and diatribe that prevailed in that Frankfurt School-besotted era. (But credit where credit’s due: once people did actually believe in the possible efficacy of theory with respect to art; it was not yet simply a marketing tool in the hands of certain artists and dealers. Imagine the reductio ad absurdum of the latter situation: Tiffany baubles boxed with tastefully printed essays by Barthes, Benjamin, Foucault, etc.) More than ten years after Levine’s revelation, appropriation couldn’t be older news. But in the pretend culture of postmodernism – actually, for the most part, a retread of standard modernist strategies such as montage, but critically evacuated of the hubris of originality, purity, revolution – old news is good news.

Hence, the contemporary situation of Sherrie Levine. Levine occupies a strategic position in the construction of a postmodernist pantheon. People are still squabbling over whether it was Levine or Richard Prince who originated rephotography, that vacuum cleaner of origins. A recent group show at Paula Cooper Gallery curated by Robert Nickas displayed a chronology of photographs interspersed with date paintings by On Kawara. Levine got 1979; Prince, 1980.

So Sherrie Levine was one of the originators of appropriation art of a certain kind. Again, it is worth repeating that this was a typical strategy of the historical avant-gardes, notably Cubism, Dada and Surrealism. But, with important exceptions like L.H.O.O.Q., Duchamp’s moustachioed Mona Lisa, proper names were seldom at issue. These people were engaged in honest stealing of available material. The difference (attention: decontextualised buzzword) between their practises and Levine’s is that in her appropriations there are no seams; the collage element was sublimated. A cute little art school project might involve cutting out pages from Janson, or Alfred Barr, and gluing them somewhere else. Levine’s project is considerably more advanced formally: she laboriously, lovingly recreated her Schieles, Klees, Mondrians etc. The photography – Walker Evans, Eliot Porter, Edward Weston, Rodchenko, probably some other guys – is a little different. Merely taking pictures of pre-existing pictures, the modernist collage element was more than sublimated, it was sucked into a parapsychological, ectoplasmic, anti-matter, counter-universe. Pierre Menard, author of the Quixote. Or maybe Tiön, Uqbar, Tertium, Orbis. Levine has concentrated the modernist collage element in a point of inexpressible tension on the shutter of her camera. Or collage revolves, sublime conceptual conceit, in the dead centre of her cranium.

But this is old news. Nowadays Levine is a happy purveyor of objects – most recently, billiard tables inspired by a famous painting by Man Ray, and in her first show at Marian Goodman Gallery, Newborn, a famous sculpture by Mr Modernism himself, Brancusi. The ‘After Man Ray’ billiard tables, or whatever they were called, didn’t look so hot, maybe because they were such obvious fakes – not fake art works, fake tables. You couldn’t really play such a fancy game as billiards on them. But the Brancusi’s look OK. For the occasion of this exhibition, the gallery has rented eight grand pianos that function like Brancusi’s much fussed-over bases. On each of them rests a sandblasted cast-glass replica of Newborn. (I am reminded of Estelle Schwartz, who, with delicious wit, graced her piano with Jeff Koons’ Popples.) Levine really likes Brancusi, she tells us in a text accompanying the exhibition of the newer Newborn, and likes modernism, idealism, purity, form. But she also likes trash and Hollywood. Hence the pianos, which we are told should remind us of Busby Berkeley’s Gold Diggers of 1935. Hi/low, class/flash: now an old story.

Which brings us to the question of a genuine evaluation: it seems that Levine’s work, having begun with a potentially transgressive gesture with respect to masculine prerogative, originality and authorship, has devolved into an almost rote recreation of familiar modern masterpieces. Where does she locate that critical dimension today? Sherrie Levine is the Franklin Mint of Modernism.