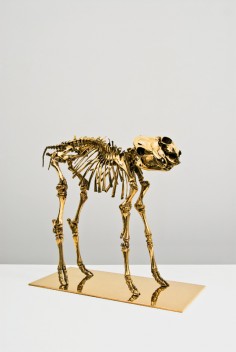 American photographer and conceptual artist. She studied at the University of Wisconsin, Madison (BA 1969, MFA 1973). Biographical information on Levine is limited, since she has refused to participate in ‘myth-making’ associated with art production. She first gained critical attention in the early 1980s, when she was associated with Cindy Sherman, Robert Longo, David Salle and others known as ‘Appropriationists’ for drawing on existing imagery from ‘high’ and ‘low’ culture. Her works have been interpreted as a commentary on the death of Modernism and its ideals, notions of artistic originality, the authenticity and autonomy of the art object and its status as a commodity. In Untitled (after Walker Evans) (10×8 photograph, 1981) Levine re-photographed a reproduction of a photograph by Evans. Such works articulated her fascination with the photographic process and its reproduction, while raising post-structuralist discourses on authorship, originality and history, from which they partly derive. Levine’s theoretical rigour was complemented by a delicate, timid, if not remote, handling of materials, adding a sensuous dimension to an otherwise academic pursuit.
.
.
.
.
.
.
.
.
source: skarstedt

Sherrie Levine was born in Hazleton Pennsylvania in 1947. She graduated from the University of Wisconsin, Madison in 1969. Since the 1980s, Levine has been known for her work with appropriation of widely known photographs or paintings. Other artists of the time such Robert Longo, David Salle and Cindy Sherman made use of existing imagery from traditional artworks and popular culture to challenge widely accepted modernist notions of meaning, originality and autonomy of the art object. She is famous for her 1981 series of photographs entitled After Walker Evans, in which she made photographic replicas of Evans’s work. In this manner, Levine’s use of images created by another artist becomes poignant commentary about artistic genius, originality, and even the role of the male artist within contemporary culture. Levine also made painted copies of works by painters such as Piet Mondrian and El Lissitzky, as a means to explore the role of artistic predecessors on contemporary artists, from a feminist perspective.

Sherrie Levine has exhibited extensively throughout the United States and Europe. Recent solo exhibiitions of her work have been held in institutions such as the Museum Haus Lange, Krefelder Kunstmuseen in Krefeld, Germany in 2011, the Mueum of Modern Art in San Francisco in 2009, and the Georgia OʼKeefe Museum in Santa
Fe, NM in 2007. She has also participated in exhibitions in major institutions such as the Whitney Museum of American Art in New York, the Ludwig Museum in Cologne and the Tate Gallery in London. Levine has participated in several international biennials, and her work has been featured in multiple publications. Sherrie Levine lives and works in New York.