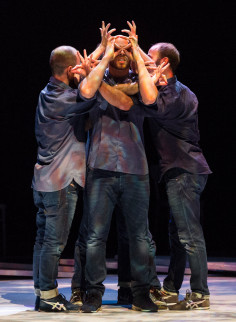 Sidi Larbi Cherkaoui ha creat més de 20 peces coreogràfiques i ha obtingut un gran nombre de guardons de gran prestigi. Des de l’any 2010 ha estat director artístic del Festival Equilibrio de Roma. Nou director artístic del Reial Ballet de Flandes des l’1 de setembre de 2015. Les seves primeres peces les va crear com a membre destacat del col·lectiu belga Les Ballets C de la B; ha treballat també amb nombrosos artistes, com Akram Khan, Damien Jalet, Maria Pagés, Shantala Shivalingappa, entre d’altres. El 2010 va crear la companyia Eastman a Anvers. Actualment, Cherkaoui continua treballant amb tot un ventall de teatres, òperes i companyies de ballet de tot el món (Ballet Nacional d’Holanda, Ballet de l’Òpera de París, GöteborgsOperan Danskompani, Ballet de Stuttgart).
.
.
.
.
.
.
.
source: east-manbe
In May 2014, I presented a short creation for the 40th anniversary of the Pina Bausch’s Wuppertal Tanztheater. Fractus was a trio in which I wanted to discuss the fracture between the individual and society. The performance was inspired by the texts of the Jewish-American linguist and political philosopher Noam Chomsky. If I translate Chomsky’s ideas for myself, I gain the insight that:
‘The only way the individual is able to protect himself against political and social propaganda, is to study all the information available. Each day we are bombarded with news that tries to influence our thinking. It is a very intensive exercise to filter everything and to resist believing what we are told to believe.’
Looking for primary movements on the edge of the tribal and folklore, this short performance raised the desire for more.
In Fractus V, I want to deepen the questions on information and manipulation; propaganda versus a more ‘objective’ and factual approach. I also take as a starting point ‘liberty of expression’. Certain taboos are often broken these days and certain truths are undeniable but we still miss the capacity to digest them or place them in the right context. Because of that we are often pushed in an ‘us versus them’ mentality. We have the information, but we don’t know how to use it. Questions I ask myself:
‘It seems certain freedoms still need to be framed? How neutral can our thinking be? How much do we identify ourselves with the causes of the injustices in society? Where does personal responsibility starts or ends?’
Chomsky’s fundamental plead for ‘freedom of speech’ against the political attempts to control and to manipulate the media, resonates with my need as an artist for a space to constantly reinvent my own identity. This necessary process of renewal doesn’t happen gradually. It happens through radical fractures and being able to let go of the past. Evolution is the combined result of an endless series of small and big revolutions. Every day is a rite of passage, a point of no return.
Fractus V is a creation with five, very different, contemporary dancers. The French virtuosic dancer Dimitri Jourde has a circus formation. The American Johnny Lloyd comes from a Lindy Hop background and is originally a musician. The Spanish dancer Fabian Thomé Duten started his career as a flamenco dancer with Joaquin Cortés and Patrick Williams Seebacher / Twoface earned his credits in hip hop and breakdance battles. I, Sidi Larbi Cherkaoui, enriched my own fluent dance language through exchange with different dance traditions for the past 15 years.
We all have different dance backgrounds and but still our movements dialogue with each other. And we share the desire to create an interesting community, both on stage and in daily life.
The live music continues this philosophy. I collaborate with the Japanese percussionist and singer Shogo Yoshii, the Korean singer and musician Woojae Park, Indian, virtuosic Sarod musician Soumik Datta and Congolese singer Kaspy N’dia. They are all experts in their own music traditions but also curious for cross-fertilizations. They are all musicians with whom I already collaborated.
Nine different nationalities and outspoken identities will dialogue to come to an intense, dramatic and fluent whole.
Fractus V stands for the natural fractures which are necessary to grow and become stronger.
Sidi Larbi Cherkaoui, March 2015
.
.
.
.
.
.
.
source: artsaliveca

Growing up in Antwerp, Belgium, Cherkaoui taught himself to dance by watching music videos. With a Flemish mother and a Moroccan father, Cherkaoui says his dual upbringing made him feel in-between. He soon realized that dance and music could also be that way.

Cherkaoui has won many awards, including the Fringe First Award at the Edinburgh Festival in 1999, the Barclay Theatre Award in 2000 and Best Choreography at the Movimentos Awards in Wolfsburg, Germany, in 2003. He has staged subsequent works like Rien de Rien (2000) and Foi (2003) through Les Ballets C. de la B.
.
.
.
.
.
.
.
source: east-manbe

Sidi Larbi Cherkaoui’s debut as a choreographer was in 1999 with Andrew Wale’s ‘contemporary musical’, Anonymous Society. Since then he has made more than 20 full-fledged choreographic pieces and picked up a slew of awards, including the Fringe First award in Edinburgh, the special prize at the BITEF Festival in Belgrade, the promising choreographer prize at the Nijinsky Awards in Monte Carlo, the Movimentos award in Germany and the Helpmann award from Australia in 2007. In 2008 Sadler’s Wells named him an Associate Artist and in 2009 the Alfred Toëpfer Stiftung conferred its Kairos prize to him in recognition of his artistic philosophy and his quest for cultural dialogue. In 2008 and 2011 he was declared Choreographer of the Year by the dance magazine Tanz.

While Cherkaoui’s initial pieces were made as a core member of the Belgian collective, Les Ballets C. de la B. – Rien de Rien (2000), Foi (2003) and Tempus Fugit (2004) – he also undertook parallel projects that both expanded and consolidated his artistic vision. Ook (2000) was born from a workshop for mentally disabled actors held by Theater Stap in Turnhout with choreographer Nienke Reehorst; D’avant (2002) from an encounter with longstanding artistic partner Damien Jalet, Juan Kruz Diaz de Garaio Esnaola and Luc Dunberry of Sasha Waltz & Guests company; and zero degrees (2005) with friend and choreographer Akram Khan. He has worked with a variety of theatres, opera houses and ballet companies, but from 2004–2009 Cherkaoui was based in Antwerp where he was artist in residence at Toneelhuis, the theatre that produced Myth (2007) and Origine (2008).

In 2008 Cherkaoui premiered Sutra at Sadler’s Wells. This award-winning collaboration with Antony Gormley and the Shaolin monks continues to tour the world to great critical acclaim. After his first commissioned piece in North America, Orbo Novo (for Cedar Lake Contemporary Ballet) and a series of duets such as Faun (which premiered at Sadler’s Wells as part of In the Spirit of Diaghilev) and Dunas with flamenco danseuse María Pagés (both in October 2009), he launched his new company Eastman in 2010, resident at deSingel International Arts Campus.
Spring 2010 saw him reunited with co-choreographer Damien Jalet and Antony Gormley to make Babel(words), the third part of a triptych that began with Foi and Myth. That same year he created Rein, a duet featuring Guro Nagelhus Schia and Vebjørn Sundby, as well as Play, a duet with kuchipudi danseuse Shantala Shivalingappa and Bound, a duet for Shanell Winlock and Gregory Maqoma as part of Southern Bound Comfort. Babel(words) triumphed at the 2011 Laurence Olivier Awards, winning best new dance production and outstanding achievement in dance for Antony Gormley.

2011 saw the creation of TeZukA, a new piece for 15 performers about the works of the master of Japanese manga, Osamu Tezuka. Cherkaoui also created Labyrinth for Dutch National Ballet.
In 2012 he created Puz/zle with 11 dancers and the Corsican men’s choir A Filetta, Lebanese singer Fadia Tomb El-Hage and Japanese musician Kazunari Abe. He also helmed the choreography for Anna Karenina, the film by Joe Wright, featuring ao Keira Knightley and Jude Law.
During the spring of 2013 Cherkaoui made several pieces: 4D for Eastman, Boléro (in collaboration with Damien Jalet and Marina Abramovic) for the Paris Opera Ballet and m¡longa, a tango performance, for Sadler’s Wells. Autumn 2013 saw the premiere of 生长genesis, a new Eastman production,in Beijing.
.
.
.
.
.
.
.
source: enoperase

Multiple award winning and constantly topical Sidi Larbi Cherkaoui creates Noetic, along with a distinguished team comprising sculptor Antony Gormley, fashion designer duo Les Hommes, and composer Szymon Brzóska. The creation explores man’s instinctive need to structure every detail of our existence, and our longing to break free of the rules and discover what lies beyond them. With at times mechanical, at times flowing, classical movements, the dancers construct, change and deconstruct reality.
Sidi Larbi Cherkaoui’s roots are in the cultures of both Morocco and Central Europe. His artistic identity has been influenced by many years of involvement in the Belgian dance company Les Ballets C de la B, whose work belongs among the most exciting things to have happened within dance in recent decades.
Cherkaoui is known for bringing together art forms, cultures and traditions. His dance company, Eastman, is attributed the title of European cultural ambassadors in 2013. The harmonic and emotional music in Noetic is composed for The Göteborg Opera Orchestra.

Antony Gormley is widely acclaimed for his sculptures, installations and public artworks that investigate the relationship of the human body to space. His work has developed the potential opened up by sculpture in the seventies through a critical engagement with both his own body and those of others in a way that confronts fundamental questions of where human beings stand in relation to nature and the cosmos. Antony Gormley and Sidi Larbi Cherkaoui have collaborated on three previous projects; Sutra, Babel and Zero Degrees. His set design for Noetic will give the dancers both bodily extensions and the constructive elements to create a potential architecture for individual and collective action.

Saburo Teshigawara, KoreografNORIFUMI INAGAKI
Virtuoso Saburo Teshigawara – sculptor, poet, visual artist and “dance maker” – has received great honours for his choreographies and body installations both in his home country of Japan and internationally. Faithful to the culture of his homeland, Teshigawara is minimalist – everything he creates is aesthetic, beautiful and pared down. It is also spiritual and subtle.
His Metamorphosis, inspired by Kafka’s novels, is an art work filled with pain and breathtaking beauty. At its centre is the body’s constant changes, the cells’ constant renewal – the metamorphosis: “Even when we believe we are completely still, our bodies are moving. That movement is life. To stop is to die. Life is like cycling – if you stop you lose your balance and fall over. Life is balance in motion.”
Metamorphosis, created for GöteborgsOperans Danskompani, is also about controlling, and allowing oneself to be controlled.
The Göteborg Opera Chorus also feature on stage, their ethereal voices contrasting with the dancers’ sometimes constrained bodies.
The works that The Göteborg Opera Chorus performs in Metamorphosis include:
Olivier Messiaen: O sacrum convivium!, choral motet (1937)
Maurice Ravel: Soupir (Suck), the first of three songs from Trois poèmes de Stéphane Mallarmé (1913) transcribed by Clytus Gottwald for a cappella choir.
.
.
.
.
.
.
.
source: territoryfestru