A Reality Artist Taking Inspiration From The Everyday 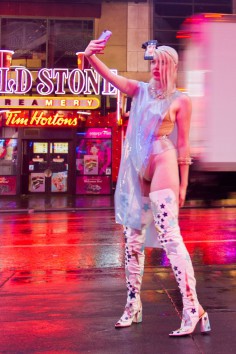 source: posturemag
Signe Pierce gained notoriety in 2015 within queer and feminist art circles for her incredibly shocking and poignant performance video, American Reflexxx. A collaborative effort with fellow artist Ali Coates, the video follows a masked, scantily clad Signe around Myrtle Beach in South Carolina as onlookers gather to harass and physically assault her. Currently, Signe is elaborating on the themes she began to explore in that video, such as cyber surveillance, constructs of femininity, and the male gaze.
.
.
.
.
.
.
.
source: artspace
Provoking critical interventions by manipulating social constructs is a staple of Pierce’s work, and in an era where mass communication is driven largely by technology, the artist has little interest in perpetuating a binary between digital networks and physical publics. Her practice, which spans acting, photography, and installation, treats the internet as a fluid extension of reality, finding presence wherever there are people to impact. Small gatherings, like that of her BOOKLUB 10 performance, are typically broadcasted to thousands of the artist’s online followers. By finding inclusion in the “post-internet” canon—in which virtual media are touted for their embodiment as art objects, removed from the constraints of a web browser—Pierce has brought multidimensionality to an international roster of galleries and museums. Her work across these realms are unified by her unwavering signature style, largely expressed through vivid neon colors, dark humour, and always with a pingback to mainstream notions of femininity—as if Barbie was perpetually drenched in James Turrell’s disorienting light instead of a fabled California sun.

Pierce is based in the U.S., and typically works bi-coastal in both in New York City and Los Angeles. She has performed and exhibited at the Museum of Modern Art in New York, the New Museum in New York, the Palais de Tokyo in Paris, the Metropolitan Museum of Art in New York, and the Museum of Contemporary Art in Los Angeles. In 2015, she received critical acclaim for her short film American Reflexxx, co-created with Alli Coates, which has been a subject of inquiry in dozens of publications like New York Magazine, ARTNews, Huffington Post, W Magazine, New Republic, Rhizome, and The Intercept.