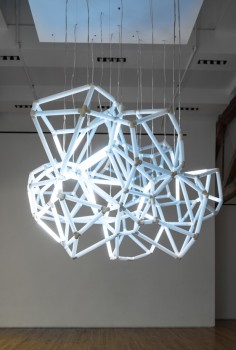 Cumulus is an interactive installation that reacts to sound with light. The cell like structure is meant to create behaviors that mimic the deliberate yet erratic behavior of lightning. Overall the piece is much lighter than the overall volume it occupies. Much like sponge the structure relies on redundancies and connections that cannot be achieved from a grid, giving it a soft cloud like shape. The irregularity of the network like structure imbues the piece with a playful personality as it reacts in unpredictable ways to environmental sound. Various behaviors were programmed including a trail that cycles through the structure, waves, and pulses, each responding to the amplitude and various ranges of surrounding sound. Each time sound in the space reaches a certain volume the piece activates. The most interesting behavior was similar to our initial intent, lightning. This behavior seeks a path through one of the next connecting segments. The duration of the path is dictated by the volume of the sound that activates it. This simple algorithm creates a wide range of effects from long lightning like strands created through sporadic low frequency sounds to a staticky chatter when people are talking underneath it.

The interactivity is achieved through a series of physical and digital systems working together. The structure is made of over 200 acrylic segments connected with over 100 unique 3D printed joints. Inside of the structure is a network of individually addressable LED strands. Overall 70 meters of LEDs were used to activate the whole structure. The various behaviors and reactions to sound were programmed using Processing. We built a UI using Proceesing to analysis the sound, activate the various behaviors, and communicate with 3 Arduino microcontrollers that then dispersed signals activating the particular LEDs that corresponded with each segment.
.
.
.
.
.
.
.
source: vimeo

Inspired by the complex geometries and deliberate yet erratic behavior of lightning, Cumulus aims to replicate naturally occurring optical effects using LED lighting and digital technology. Suspended from a single ceiling beam, the installation — a lightweight structure comprising acrylic tubes, 3D-printed nylon joints and LED strips — takes on the physical embodiment of an abstracted cloud. The “cloud” has been digitally programmed to respond to environmental sound, thereby interacting with viewers in delightfully spontaneous and engaging ways.