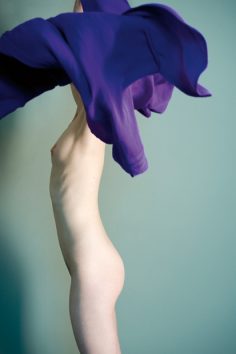 source:sophiedelaportecom
Sophie Delaporte is a fashion photographer who began her career in the early 2000s by publishing her first series in the British press, and more particularly in i-D Magazine.
Her fashion photos were exhibited in galleries as early as 2002 at the request of Alice Morgaine and Marion Meyer Gallery during the Paris Photography Month.
In 2004 Franca Sozzani entrusted her with a 14-page spread for Italian Vogue, which was to be her first series for Condé Nast.
Sophie Delaporte has since worked regularly for other Vogues, such as Vogue Turkey, Vogue China, Vogue Uomo, Vogue Japan; as well as for other magazines such as Dazed and Confused, and Another Magazine.
She has been working with Astier de Villatte since 2002, and fashion houses such as Dior or Hermes call on her.
The work of Sophie Delaporte has been the subject of numerous solo exhibitions throughout the world, including New York (SLE Gallery in 2009, 2011 and 2016), Tokyo (at Gallery 21 in 2010) and London (Scream Gallery, 2008) and at many international fairs (such as recently at Palm Beach Modern + Contemporary Art Fair, Miami 2018).
The famous photography historian and critic Vicki Goldberg wrote about her work in 2011: “Sophie Delaporte is a French photographer who is on permanently good terms with fantasy and a cheerfully offbeat approach. She has a distinctive sense of color, a fabulist’s imagination, an edge of surrealism, and a knack for ambiguous narrative”.
.
.
.
.
.
.
.
source:thoughtgalleryorg
Join French artist and photographer Sophie Delaporte at Sous Les Etoiles Gallery for an Artist Talk on her surrealist work in the fine art and fashion photography worlds. “Postmodern Mysteries,” Delaporte’s third solo exhibition at the gallery, will also be on view through June 11, 2016.

Since the early ’90s, when the artist would begin her formative and longstanding collaborations with cutting-edge British magazine I-D, Sophie Delaporte has remained dedicated to the “play” of photography and fashion in its most straightforward definition, emphasizing fun, freedom and theatricality. Yet Delaporte’s lighthearted view of the worlds she creates, in which women and men appear to happily vacillate between childhood and adulthood, are anything but straightforward. This immediately recognizable style of Delaporte—highly pictorial, and often employing lush color and sparkling humor— promises such multifaceted readings, that any sequence of images can be arranged and disarranged to pleasing effect: a dinner scene, framed in front of darkening windows and spotted with silverware that reflects the impossibly bright wine set in glass goblets, could be at once a poetical, beautiful meditation on the power of the woman in red at the head of this table, and also a charged scene from a contemporary iteration of Ubu Roi. “The mysteries are decidely postmodern,” writes Vicki Goldberg, “consisting of inexplicable actions, they involve no crime and have no solution other than anyone’s guess.” With an ever-refreshing perspective, along with the mastery of pretended improvisation and movement in a tightly controlled studio setting, Delaporte positions her work in the realm of surrealism, promising nothing but the surprise and delight of the imagination.

Sophie Delaporte, b. 1971, is a French artist and photographer who works in fashion on a regular basis. The depth of color, staging, gestures and simple fun of her imagery evoke the world of storytelling. Delaportes’ photographic language imagines situations that do not exist, suggesting an alternative fantasy vision of women in fashion photography. Art historical references are fundamental to the work, and are inspired by the performing arts, such as the work of Pina Bausch, and early woman surrealist photographers, such as Claude Cahun.

The work of Sophie Delaporte has been shown in numerous solo exhibitions around the world, including New York (Sous Les Etoiles Gallery), Tokyo (Galerie 21 and HPgrp Gallery), and London (Scream Gallery). Her work is also featured in publications such as Another Magazine; Vogue Japan, China, Italy, and Russia; Interview; Harper’s Bazaar; and I-D Magazine, with whom she has regularly collaborated since the 1990s. Her series Needlework was featured in the book “The Art of Fashion Photography” by Patrick Remy, published by Prestel in 2013. Sophie Delaporte studied photography and film at the Ecole nationale supérieure Louis-Lumière.

The photographs featured in “Postmodern Mysteries” were originally conceived as part of a longterm and enduring collaboration with design company Astier de Villatte (who are, in addition, the principal models), and made into a book with text by Vicki Goldberg. Copies of the book are available for purchase at the gallery.