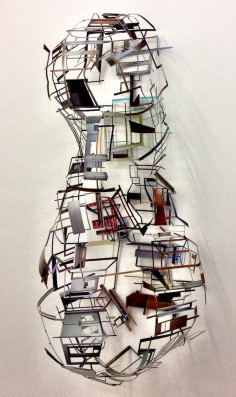 Finch carefully records the invisible world, while simultaneously striving to understand what might lie beyond it. Whether he is relying on his own powers of observation or using a colorimeter, a device that reads the average color and temperature of light, the artist employs a scientific method to achieve poetic ends. . . . Contrary to what one might expect, Finch’s efforts toward accuracy- the precise measurements he takes under different conditions and at different times of day- resist, in the end, a definitive result or single empirical truth about his subject. Instead, his dogged method reinforces the fleeting, temporal nature of the observed world, illustrating his own version of a theory of relativity. In Finch’s universe if you wait a few hours, the sun may very well change a leaden hue into gold. Like the ancient practitioners of the hermetic arts, who saw changes as the most fundamental truth of the universe, the artist doesn’t always provide an answer in his investigations. For Finch art can do more; it can “ignite our capacity for wonder.”
Excerpt from Susan Cross, What Time Is It On The Sun pp. 9-17, 2007
.
.
.
.
.
.
.
source: spencerfinch

Representation always infers a distance from, and difference to the referent, and difference and distance are what Finch’s light installations slowly underline. Though the viewers might initially look at the glow hitting the walls around them and be impressed by the accuracy of Finch’s representation of a faraway light, they will inevitably cast their eyes upon the dumb materials which emit or filter it- the fluorescent tubes, the individual bits of colored plastics, the tape and cloths pegs that hold everything together, and so on. Unlike James Turrell, or even Dan Flavin, who occasionally pointed some tubes towards the wall to conceal the exact colors he used, Finch will never hide his materials, and by making them so self-evident, he allows his illusions to fall apart even as they are created. Attending to the literal materials of Finch’s installations, viewers recall that they are in the interior of a gallery in a nondescript building in a city far away from the initial location. This is not the fleeting violet of a Troy dawn, nor the shadow on a bright snowy day at Giverny, but a crude and static technological recreation, albeit an accurate one.
Excerpt from Mark Godfrey, Parkett pp. 14-19, No. 79 2007
.
.
.
.
.
.
.
source: spencerfinch

Sensing that our observations must be tied to experience if we are to get at the truth of something, Finch is compelled continually to expand the scope of his projects, returning to the same sites at all hours to look again and again. He traveled to Rouen to visit the cathedral painted by Claude Monet but found the building closed for renovation. Undeterred, Finch decided to make a series of paintings depicting the colors of various objects in his hotel room. By the time he had completed the arduous task of matching 55 colors, the changing light had altered every one. Thus the work grew into a triptych, a wry blend of Conceptual and Impressionist methodologies, representing the same set of colors in the morning, afternoon, and evening. As Finch is fascinated with the interaction of the physiological and the psychological aspects of perception, the way our inner world casts a veil over the outer, it makes sense that he would travel thousands of miles to make a work that explored the tiniest details of his hotel room. For him vision is an act of projection as much as of apprehension. . . . Darkness and light. Blindness and insight. Nature and Science. These dichotomies arise in Finch’s work only to have their usefulness and validity interrogated. Their too-easy formulas and their promise of an absolute veracity are not to be trusted. His work for the past decade had consciously distilled these issues and has grown richer, more potent. Resisting conclusion, Finch nevertheless aspires to a greater appreciation of the problem. . .
Excerpt from Charles LaBelle, Frieze pp. 66-69, May 2003
.
.
.
.
.
.
.
source: spencerfinch

This means that Finch’s understanding of color theory, in the end, doesn’t amount to an alternative to formalism or Conceptualism. He is unafraid to inhabit the paradox that art exists in the play between language and perception. What many artists and theorists find unbearable, literally, the ‘speaking against itself’ implied in para-doxa, is for Finch less something to escape than the very condition necessary for his art practice. That is why his work demonstrates a Proustian interest in the difficulties and disappointments of recollection. He knows that color lies at the boundary of what we see and what we remember. Despite the thick red line of humor that runs through his work, Finch’s projects are always laced with the acute pathos of someone disappointed by both perception and language and by their mutual exclusivity and incompatibility. “There is always a paradox inherent in vision, an impossible desire to see yourself seeing. A lot of my work probes this tension; to want to see, but not being able to,” Finch says in a catalogue for a 1997 show at the Wadsworth Atheneum in Hartford, CT. Color is less a trope of indeterminacy than a way to re-create an almost visceral experience of our impossible desire to name our perceptions.
Excerpt from Saul Anton, Artforum, pp. 124-127, April 2001.
.
.
.
.
.
.
.
source: yvon-lambert

Using light as his medium, Spencer Finch’s works deal with notions of perception and the experience of time. He keeps pursuing an ineffable moment where past and present, memory and instant meet; personal desire and world history collide.
After visiting loaded, historic places such as the cave of Lascaux, this new project relates to William Shakespeare play, Hamlet. Through an LED installation, Spencer Finch offers a sparkling fireflies night, each light playing a different character part, their intensity and movement representing each personality and move. Spencer Finch creates an atmosphere exalting mystery and fantasy – a dream place combining darkness and light, angst and delight. The arisen dichotomy is inspired by the 3rd act of Hamlet where the tension reaches its peak – the act shedding the light on the characters’ real nature, revealing its hero in the sublime of his existential ontemplation (To be or not to be?) but also in the uttermost cruelty of his human condition.
Exploring through light the spiritual and emotional conflicts of each individual, Spencer Finch embraces a certain idea of romanticism and invites the audience to reflexion and introspection.
Spencer Finch is born in New Haven in Connecticut in 1962; he lives and works in Brooklyn. In 2007, his work featured in a retrospective at the MASS MoCA of North Adams, Massachusetts. Spencer Finch has a current exhibition at the Folkestone Triennal in the United Kingdom and his next 2011 exhibitions will take place at the Emily Dickinson Museum in Amherst, Massachusetts, at the Indianapolis Museum in Indiana, and also at the Art Institute of Chicago Museum in Illinois.
.
.
.
.
.
.
.
source: yvon-lambert

Spencer Finch, born 1962 in New Haven Connecticut, lives and works in Brooklyn. He received a BA in comparative literature from Hamilton College, and a MFA in sculpture from the Rhode Island School of Design. In his installations and works on paper, Finch attempts to depict the most elusive of subjects and continually explores the nature of color, light, memory and perception. Often employing industrial means to a poetic end, the works operate in the gap between the objectivity of scientific data and the subjectivity of creative expression. Recent major exhibitions include a mid-career survey What Time Is It On The Sun?, MASS MOCA, North Adams, M.A., May 2007– spring 2008, accompanied by a 192-page monograph; Artificial Light, Virginia Museum of Fine Arts, Richmond, V.A., 2006, and the Museum of Contemporary Art, Miami, 2006-2007; and Light x Eight, The Jewish Museum, N.Y., 2006-2007; as well as numerous exhibitions worldwide. His work is in the collections of the High Museum of Art, Atlanta; Hirshhorn Museum and Sculpture Garden, Washington, DC.; Museum für Moderne Kunst, Frankfurt am Main; and the Solomon R. Guggenheim Museum, New York; among others. The artist is represented in the U.S. by Postmasters Gallery, NY and Rhona Hoffman Gallery, Chicago.