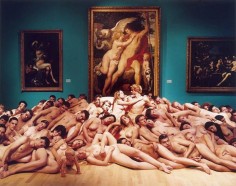 source:vagabondquestcom
After 3 weeks of amazing trip in the North Island, New Zealand (stories coming, I promise), we were back in Sydney last Sunday, February the 28th. Today my friend told me I just missed 2 big events in Sydney. The first one was the Mardi Gras parade and fireworks on Saturday, just right a day before we came. I thought previously it was going to be on Sunday, so I actually was excited the whole day to see how things would be going, since I’ve never been in a Mardi Gras event before. However I saw nothing and later informed that it was on the previous day. I was late, bummer!

The second one was the organized mass naked photograph of more than 5000 people in Sydney Opera House, by Spencer Tunick.

This great American artist is well known for his mass naked photographs in interesting formations and backgrounds in all over the world. Here are some great photographs by him. (Pictures taken from here)

We were actually already in Sydney during this photograph session, which is in the morning of March 1st, however we haven’t been reading news for a while when we were on road in NZ, so we had no idea.

While I missed such an interesting event, this reminded me of our interesting encounter with bunch of naked Spanish cyclists. This was back in June 13th, 2009 in Madrid. That morning I and my husband moved from our second Madrid accommodation to the third one. We took the metro, and as we coming up from the underground station to the artery road Calle Gran Via, we were astonished of what we saw: A huge group of cyclists, all nude! Just strolling down the road cheerily. Wow, I’d never seen such a thing!! I thought it was bizarre.

They were real people. I mean, not models. Real people with their real various body shapes. From young to old, male and female. Some carried a little bag in their naked body, some wear only top and let the half body down exposed (not a common choice for typical men!). A few of the women were wearing bikini bottoms, made me wonder was that because they wanted to cover up a bit, or it was just not comfortable sitting naked on a bicycle seat on a hot day. There were also little kids, even though they were more covered up. For some, even though they exposed their whole body to possible bicycle accidents, they still remembered to use their helmet!
.
.
.
.
.
.
.
source:haydnallbuttcomau
Every so often I have come across an image on the web of a massive number of nude people all arranged in a pose of some sort, most often in cities but also out in the country (see below for some examples). The photos are kind of cool in that the people in them are just people, stripped of any sign of rank or pretension or design. They are just them selves. It is not something you often see in a world where people are raised to put on an image and present themselves in a certain “acceptable” way. The detail and the co-ordination in the photos too are often as captivating as the fact that everyone is nude as well.

I never knew too much about what they were about, but I saw one in last Saturday’s Sydney Morning Herald together with a story how the photographer Spencer Tunick was in Sydney and together with the organisers of the New Mardi Gras were organizing Spencer Tunicks first large scale installation in Sydney. The story had a tongue in cheek sort of tone to it saying how while 2000 people have signed up to be a part of the installation years of experience have taught them to expect shrinkage. It’s one thing, the story quotes, to get excited and sign up, but then when it comes to actually doing it on the day they get cold feet…or other cold things perhaps.

It is the usual tone you get with that sort of story, a sort of mocking, patronising tone. Public nudity isn’t widely accepted yet. But it is actually kind of liberating to be that comfortable with your self that you can say for those couple of hours while you are doing it that no, I am not going to be made to feel like my body is something to be ashamed of or disgusted by. I rather suspect more people should feel that way then perhaps there would be less in the way if eating disorders.

The Sydney installation is called “The Base” and upon investigation I found that you can sign up at the following web site. I wondered whether I could do such a thing. But never one to shy away from a provokative piece of performance art by a internationally renowned photographer, certainly not when nudity is involved, I signed up. The shoot is this Monday coming up (1st of March) very early in the morning down at the Opera House. It will be interesting to see what it is like. For participating you get an 8 x 10″ print of the work and the satisfaction of having made art no doubt.

I am a little bit torn though, since there is nudity involved, as a guy you kind of hope there are some really hot chicks to perve on. I mean lets face it clothed or unclothed we would perve anyway so that much isn’t really changed by the nudity. But haviung said that since you your self are also standing there stark naked on the Opera House steps, you don’t want the girls surrounding you to be too hot. I mean you are often entwined amongst these people quite closely. You wouldn’t want there to be any movement at the station if you catch my meaning. That might be embarrasing!

Any way we’ll see how we go come Monday, it should be fun.

Below are some example photos from Spencer Tunick for those of you who are not familiiar wit his work. If you had not heard about this Sydney installation before and are keen you should sign up.
.
.
.
.
.
.
.
source:fotografiaartisticait
“Non capita mai che selezioni le persone secondo criteri di bellezza fisica, ritraggo solo chi me lo chiede”. Spencer Tunick, è un artista provocatorio e controverso, noto per le sue fotografie di grandi gruppi di persone nude disposte in formazioni artistiche, spesso in zone urbane.