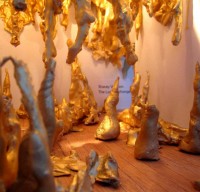 Golden stalactites hang from the roof of a glowing grotto, reaching ever so ponderously, impossibly, slowly to meet their stalagmite counterparts. The stalagmites are, in turn, formed by the preposterous labor of billions of water droplets, drizzling down the stalactites and falling to the cavern floor. With each drip, micro-milligrams of golden limestone accumulate to form perilous towers, stretching up to touch their creators and eventually joining them in a single column. The grotto itself is no longer a mere cave, but has been gilded and transformed through human activity for undisclosed ends. What rituals or obscure cosmic rites were performed in this transmogrified gloom? What are we to make of the mysterious axe? Against the backdrop of a gargantuan timescale, the scene suggests wealth, ambition, and opulence, but also gloom, doom, and decay.

Citing a range of source material for inspiration (the elaborate maquettes found in the Garnier Opera House in Paris, the tinfoil grandeur of the Ladurée macaroon shop in London, the unfinished Crystal Grotto in Surrey’s Painshill Park, and the Rocky Mountains of her native Canada), Watson has gooped, dripped, and oozed her sloppy materials all over the Projective City gallery, transforming the main exhibition space into an epic faux grotto. The cave is golden, luxurious, and rich, but it is a shabby luxury—a deliberately staged elegance at once natural and artificial, ceremonial and banal. Watson’s use of everyday materials (even in large quantities) evokes the pleasure of artistic play, and her light handling of complex themes generates an atmosphere at once solemn and absurd.

Watson has been shown in solo and group exhibitions in London, Paris, Berlin, Toronto and her native Calgary, where she is also the head curator at Pith Gallery. Her admittedly “ham-fisted,” playful approach to materials is unapologetically demanding of her viewers, who are invited to stretch their imaginations to meet hers, perhaps not unlike the stalactites and stalagmites in her current installation.