The Agency At The End Of Civilisation 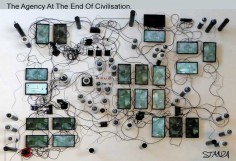 The artwork “The Agency At The End Of Civilisation” is a real time interpretation of the data of the Internet of Cars project using the UK car number plate recognition system aligned with real time images from one hundred CCTV cameras in the region of South of England. The installation presents all this as a spatialised audio experience of spoken texts and generative visuals. The audience engages with the work as observer (of the surveillance and recorded space) looking at 24 screens, a dozen speakers, and a labyrinth of CCTV cameras built as an art installation presented on a plinth.
The artworks makes use of future predictive software while at the same time exploring time from multiple perspectives in what Stanza calls a “Parallel Reality”. The artworks uses and accesses real time transport data gathered through the transport systems around the South Coast Of England. Stanza builds a cacophony of narratives of mass information which create an overseeing system of control in public space. Custom made software interrogates the information flow in real time and re-purposes it tell us a new and different story. A new narrative is created by Stanza with a custom made future predicative software that runs in parallel to traffic data and Stanza imposes his systems to create a different series of events that come into play. The control system is under control and manipulated to re/direct attention where the system wants.
We live in a ever changing real time environment in which the micro and macro events can can captured using new technologies and this data can be harvested for a variety of purposes from surveillance to environmental monitoring.
Stanza uses multiple new technologies to create distances between real time multi point perspectives that emphasis a new visual space. The purpose of this is to communicate feelings and emotions that we encounter daily which impact on our lives and which are outside our control. Small units of change become huge incidents of flowing swarming information that can be woven to extract new “meaning” about the world which both has economic and cultural value. The world we live in is connected up using millions of devices and in six years time there will be over 20 billions connected devices that represents the internet of things.
.
.
.
.
.
.
.
source: stanzacouk