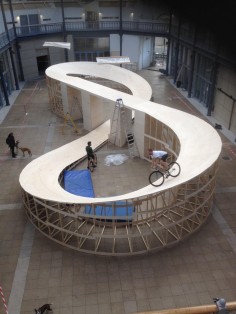 “Scary the first time,” reports builder Stephen Murray. The artist, sculptor and cyclist behind The Comedown figure-eight track in Glasgow, Scotland just took the first ride on the track this morning after months of planning, design and fabrication work.

The Comedown is reminiscent of the late ’90s Human Powered Rollercoaster that made an appearance at the 1995 Toronto Cycle Messenger World Championships (edited, org text had wrong date), though at a smaller scale. Where the earlier HPR was large enough for two-up racing (video, images) The Comedown is single-file affair.

The idea for The Comedown came from the building of the Sir Chris Hoy velodrome for the recent Commonwealth Games. “We started riding on the velodrome once it was built and chatting about how it was made etc. Then the Red Bull Mini Velodrome, came to Glasgow and my mate John Silvera who is a joiner and cyclist and all round good man raced on it (and folded his wheel and went flying off the side).” Murray said. It wouldn’t be available to the public for the length of the games, and funding was announced from Creative Scotland to fund 20, £14,000 commissions for art projects related to the Games, leading to a quick proposal to make a minidrome for the public during the games. Murray continued, “A week later I was in the pub with John and Brian from Rig Bike Shop which is where all the couriers work from in Glasgow. Anyway Brian told me it was a shit idea to build a minidrome as the Red Bull one already exists etc. But he had ridden the Dunhill one in Canada back in the day and what I should do is make an eight. Which I had never heard of.”

“We were all pretty pissed but I totally latched on to it.”

The funding ended up being approved, and the project kept under the radar until a suitable venue was found. It was originally slated for a warehouse during the Games in June but it fell through last minute, and then the current The Briggait / Wasps location was secured for a narrow window in October. It was scaled to fit the space and budget, and production began. “In my workshop I manufactured all the structural elements as a giant kit, then me and four good mates, John, Rob, Jason and Dom moved it all onsite last Monday. Tuesday we got a 165 sheets of plywood delivered. Since then we’ve assembled the frames and been bespoke fitting every sheet and building laminations up to take the curves,” Murray continued.

STEVE MURRAY POSTER 10“Basically we’re at a point now if someone wanted to step in and back us financily we could go rework the design and build a demountable, raceble, transportable, figure-eight velodrome. We’ve got the whole thing down. We would adjust a lot of things as this has been a massive learning curve and the difference between working in CAD and physically having the opportunity make a 30 m x 12 m x 3.6 m sculptural velodrome is massive. But we’ve fucking done it.”