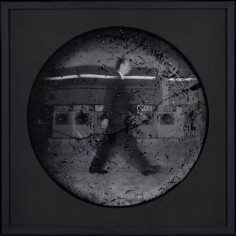 English photographer and sculptor. After completing a degree in Mechanical Engineering, he took a Foundation course in art at Loughborough College (1981–2) and then studied sculpture at Brighton Polytechnic (1982–5) and the Chelsea School of Art, London (1987). He worked in Berlin on a DAAD scholarship in 1997–8, and was shortlisted for the Turner Prize in 1999. Pippin typically uses objects such as bath tubs, wardrobes and washing machines converted so that they function as cameras. The equipment itself, the process (often filmed) of converting the objects and and their methods of operation are as important as the results; the makeshift cameras and the photographic images produced by them are often displayed together. An essential aspect of these works is that the photographic subject is related to the reconfigured object; for Beach Bath (1983) Pippin converted a bath tub into a pin-hole camera, using it to photograph semi-naked figures on the Brighton sea front. In 1985 Pippin began experimenting with washing machines, leading in 1991 to his first series of Laundromat Pictures. The project culminated in Laundromat–Locomotion (Horse & Rider) (1997; New York, Twelve black-and-white photographs, produced by Gavin Brown’s Enterprise), a row of twelve washing machines ingeniously converted into cameras operated by a trip wire. The resulting images of a horse being ridden through the laundromat paid homage to the pioneering experimental photography of Eadweard Muybridge. From 1991 Pippin also constructed a variety of sculptural machines that incorporated sound, vision and movement.
.
.
.
.
.
.
.
source: tateorguk

Steven Pippin first experimented with temporarily transforming washing machines into cameras in 1989 after he had noticed a number of similarities in the workings of washing machines and the development of photographs. For him ‘the elaborate and precise mechanism of the washing machine was a perfect system for making photographs. The eye of the machine (with the addition of an aluminium hood combining lens and shutter device) adapted to the transition of camera lens with the slightest of intervention. The pre-wash, rinse, main wash and final rinse cycles adapted to the chemical process of developer, rinse, fixer and final wash all of which were accurately temperature controlled.’ (Steven Pippin, ‘Pictorial Troubleshooting’, in Discovering the Secrets of…, p.56.)
London-based Pippin made his first Laundromat images in 1991. In 1997, using a row of twelve commercial washing machines in a laundromat based in Bayonne, New Jersey, he made a number of more ambitious series titled Laundromat-Locomotion. The title of these series refers to the analysis of human and animal motion undertaken by pioneering photographer Eadweard Muybridge (1830-1904). Published as Animal Locomotion in 1887, Muybridge’s study examined movement through sequential images using a number of cameras furnished with mechanically tripped shutters. There is a direct relationship between Muybridge’s work and Laundromat-Locomotion. Pippin has written that the more he thought about Muybridge ‘the more it seemed necessary to pay some kind of tribute’ and added that the excessive scratching caused by the negatives being spun at 500 rpm in a washing machine unexpectedly gave his images ‘some degree of authenticity by making it look like an original Muybridge from one hundred years ago. The scratches on the negative surface becoming a substitute for time, an artificial ageing process lending the pictures an accidental air of authenticity.’ (Steven Pippin, ‘Applied Photography’, in Laundromat – Locomotion, pp.153, 154.)
Pippin’s Laundromat-Locomotion series of 1997 mark the ambitious culmination of his washing machines project and Laundromat-Locomotion (Walking in Suit) is especially remarkable for the range of clarity to abstraction as the sequence progresses. It was produced in an edition of five (of which this is number one) and consists of twelve black and white contact prints made from paper negatives which were fixed to the back of the washing machines’ drums, opposite the opening. Having previously set up twelve cotton tripwires in front of the adapted washing machines, the artist triggered the shutters sequentially by walking across the tripwires. The photographs portray him in profile, wearing a suit. Pippin often wears a suit while working and in this case he purposefully wore one both to install his apparatus and in the photographs as an ‘ordinary’ counterpoint to his eccentric activities, in order to blend in with the laundromat’s customers.
The suit worn by Pippin and clothing in general are a critical element of this work. Indeed, as the artist has stated, the idea of ‘the physical mass of clothing inside the machine being replaced by the more ephemeral image of the clothes, projected inside by the action of light reflected from a suited figure walking past the outside, was the primary concept or meaning of the work, and is crucial to any understanding of it.’ (‘Applied Photography’, p.157.)
.
.
.
.
.
.
.
source: icaphilaorg

Laundromat/Locomotion is the result of a project that Pippin conducted in a New Jersey laundromat where he transformed washing machines into cameras. As an homage to the locomotion studies of Eadweard Muybridge, Pippin connected trip wires to a row of twelve front-loading washing machines and proceeded to walk, run, and ride a horse through the laundromat, thus creating his own contemporary motion studies. Pippin’s unorthodox technique also included developing the photographs in the wash and rinse cycles of the machines.

It is noteworthy that ICA exhibited this body of work, as Muybridge worked at the University of Pennsylvania, and his motion studies are now in the University archives.
.
.
.
.
.
.
source: bloglivedoorjp