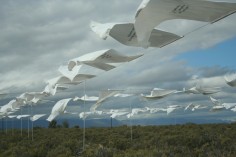 Work: I invited 46 poets from South Africa to write me haikoes about: clouds, wind, water, trees, mountains and the earh. The 166 haikoes (poems) i then printed on the white fabric that is 2 x 1 meter and all these poems where then hang onto long lines in the Karoo landscape outside the town of Oudtshoorn South Africa. as the wind blow these fabric with printed poems function as prayer flags and the wishes / messages where the blown across the landscape. The installation was up for 7 days and then dismantle again and the fabric with printed poems was sold to the public.
Photographer: Strijdom van der merwe
.
.
.
.
.
.
.
source: strijdomcoza

In 1983 he obtained a BA Degree in Fine Arts from the university of Stellenbosch. Received the John van Reenen bursary as the best Graphic Design Student.
He finished a BA Hons Degree in Fine Arts in 1984 at the same university. From 1984 onwards he worked as a graphic designer and in 1990 received a bursary from Dutch Government to study print-making at the Hooge School voor de Kunste, utrecht, Holland. In 1992 he became head graphic designer at the graphic design studio of the university of Stellenbosch.
From 1993 – 1995 he also lectured computer graphics at the Art Department of the university of Stellenbosch.
During 1995 he studies sculpture for six months at the Academy of Art,Architecture & Design in praha,
the chezh Republic and went on to become artist in residence at the Kent Institute of Art and Design,
canterbury, England in 1995/1996. Since 1996 he is working full time as an artist. Exhibitions and commissions on invitation were done in South Korea x 2, Turkey, Belgium x 2, France, Sweden, Lithuania, Japan, Australia, Germany England and Italy x 2. He held many personal exhibitions in various art galleries in the past years and his work has been bought by numerous private and public collectors locally and abroad.
.
.
.
.
.
.
.
source: proteabookslive

“Lines are very important in my work,” Van der Merwe said, illustrating his statement with a slide of land art made with a broom near Beaufort West for the television programme A Country Imagined. “And so is people’s interaction with art.” He once made use of the country’s 24 brightest young minds, in an event sponsored by Microsoft, to create an enormous fingerprint in the sand on Harold’s Bay beach. Each of the participants were given a square piece of sand and lines they needed to create on it, but they were not told what the end product would be. This emphasised the importance of teamwork.
.
.
.
.
.
.
.
source: delgrisalazulblogspot

trijdom Van der Merwe grew up on a farm on the outskirts of Johannesburg (South Africa). He completed his fine arts degree in 1984 at Stellenbosch University and furthered his studies at Hooge School Voor de Kunste, Utrecht, Holland (where he studied print-making); The Academy of Art and Architecture and Design, Praha , Czech Republic and at The Kent Institute of Art and Design, Canterbury, England. Since 1996 he has worked full time as a land artist.
As a land artist he uses the materials provided by the chosen site. Strijdom Van der Merwe’s sculptural forms take shape in relation to the landscape. It is a process of working with the natural world, using sand, water, wood, rocks etc.. He shapes these elements into geometrical forms that participate with their environment, continually changing until their final probable destruction. He observes the fragility of beauty, while not lamenting its passing, what remains is a photographic image, a fragment of time and ultimately the imagination. While a visual record is materially all that is left, he also leaves us a reminder of the capacity, however feeble, of an individual to alter the universe by embracing the ceaseless changing of nature, actively contributing to it and, in so doing, moderating and beautifying the outcome. These images have been transformed into lithographs. Strijdom Van der Merwe is probably the ‘Greenist” artist that we have worked with. The movement that broadly defines the very diverse group of artists who work devotedly, some would say obsessively within nature is founded primarily in their objection to the materialistic and the superficial prevalent in so-called Western culture. At the forefront of environmentalism in art Van der Merwe creates work that resonates with the meditative quiet that one finds in the natural world. A shamanistic like connection with the patterns and spirit of the natural world is revealed in his work. This reverence for the environment is often playful and humourous and delights the eye with the way he uses simple manipulations of materials to create something quite unexpected.
Imagine painters immersing themselves in paint, surrounding themselves in canvas; this is what the land artists does. It must be a humbling experience to be surrounded so completely by ones materials and inspiration. While working with us Van der Merwe was at the press with the master printers during the day and then in the evening and over weekends he was out exploring everything outside the studio. Finally an artist that our children could understand! Excited by the materials offered by a sub-tropical environment Van der Merwe worked two shifts. ‘ It’s an art of the unknown. Each time the material/medium/place itself is a revelation.” ”There is a certain charm to the ephemeral aspect of land art,” says Van der Merwe. “The impact lies in the fact that the work creates the idea that it forms part of a natural cycle. Most land artists are not interested in enforcing their own identities on nature but in forming part of a greater cycle. The landscape impacts on the artist rather than the other way round.”