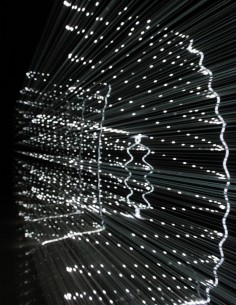 483 Lines is the latest installation by Seoul based studio Kimchi and Chips (Elliot Woods and Mimi Son) and is comprised of 483 nylon threads with projections calibrated in 3D to the 16m threads using Rulr, an open source node-based toolkit developed by the studio.

From World War II up until the recent end of analogue broadcasts, decades of living imagery had been constructed using the NTSC standard. This standard represents a moving image frame as 483 lines of modulated light stacked from the top to the bottom of a television screen, within each line there is an analogue continuum, like the groove on a record player. From Nam Jun Paik to the moon landings, pictures were being represented, archived and seen within this format, until the line made way for the pixel and the digital video revolution.

The artwork 483 lines magnifies this analogue video picture until it is 16 meters wide, and then folds this image several times so that it fits vertically into the gallery space, therein adding oscillations of depth into the image which can be activated by ‘tuning’ the projected video to match these waves.

The strictly arranged lines can be illusionary, creating a confusing architecture of horizons, whilst the video played through it displays a parallel past, present and future.

The installation is comprised of laser cut alignment sheets at each end with 2kg of tension on each string (1tonne total). The team used a pulley and a 2kg weight to tension each. Once the team finalised the 3d arrangement, they do a 3d calibration of the projectors to those strings and a 3D edge blend. Rulr allow users to create patches of nodes to calibrate cameras, projectors, tracking systems and other devices. 483 Lines was designed so that the projector would have to be in specific exact positions and angles. Unfortunately this was proving to be impossible so instead by aligning projected pixels to strings, Elliot and Mimi can figure out 4 degrees of freedom. The final 2 degrees are solved by measuring where along the string the projected pixel is landing.

Rulr was made using C++, on top of openFrameworks and runs as a standalone app in in Windows and OSX. It is currently in pre-release state aimed for release later this year. If you are interested in beta testing the software, try catching one of their workshops – next one is up in Amsterdam, part of Coded Matters series ran by FIBER.
.
.
.
.
.
.
source: kimchiandchips

Kimchi and Chips’ previous work Line Segments Space fills the gallery with a web of dynamic imagery. At the end of last year, the Jeju Museum of Art commissioned a new version of 「Line Segments Space, 2013」 for the exhibition From Moment To Moment. The museum designed by Korean architect Mijung Kim is a panorama of reflective floors and square concrete apertures, and these architectural characteristics demanded a reconsidering of the work and the principals by which it is arranged, leading the artists into a different path and ultimately creating a new work, 483 lines.

They formed in 2009 to combine the disciplines of code, form, material, concept and mechanism. They create installations and dialogues which have been exhibited on four continents.

They create an emulsion of imagined reality within our physical world, in order to develop natural interactions between people, nature and the possibilities of the digital network.

Elliot Woods
Elliot Woods is a digital media artist, technologist, curator, educator from Manchester UK. He creates provocations towards future interactions between humans and socio-visual design technologies (principally projectors, cameras and graphical computation). Towards this goal, Elliot co-founded Kimchi and Chips, an experimental art / design / technology studio based in Seoul. He is known for transforming a tree into an addressable array of voxels and for throwing augmented fireballs.

He is a curator of the ScreenLab Residency and ScreenLab Conference programmes, which develop digital media arts practice, and encourage the dialogue between digital and contemporary art cultures.

He applies his academic background in physics to produce sense-able interfaces with abstract systems, whilst applying a methodical approach to artistic enquiry.
Elliot is a contributor to the openFrameworks project (a ubiquitous toolkit for creative coding), and an open source contributor to the VVVV platform. His code is available open source and for free on GitHub.

Her artwork has been exhibited in Seoul, Tokyo, Barcelona and Arhus in Denmark. She is currently researching emotional and tangible interaction for future life and the effects of technology from a creative approach.

She is interested in exploring her surroundings with her eyes shining before creating something interactive and funny based on narrative snippets from her life. She loves to play with art and nature as well as technology, which all lead her into a creative world.
.
.
.
.
.
.
.
source: kimchiandchips

Kimchi and Chips is a Seoul based art and design studio founded by Elliot Woods (UK) and Mimi Son (South Korea). They are known for discovering novel interactions involving people and media materials, discovering new technical and artistic paradigms.

They formed in 2009 to combine the disciplines of code, form, material, concept and mechanism. They create installations and dialogues which have been exhibited on four continents.

They create an emulsion of imagined realitiy within our physical world, in order to develop natural interactions between people, nature and the possibilities of the digital network.

Elliot will present Kimchi and Chips’ provocations towards possible visual futures, a brief discussion on sight perception, and the influence of intermediation for visual art projects.