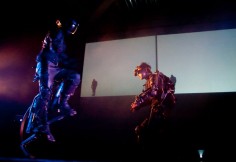 Bio: Suguru Goto is a composer/performer, an inventor and a multimedia artist and he is considered one of the most innovative and the mouthpiece of a new generation of Japanese artists. He is highly connected to technical experimentation in the artistic field and to the extension of the existing potentialities in the relation man-machine. In his works the new technologies mix up in interactive installations and experimental performances; he is the one who invented the so called virtual music instruments, able to create an interface for the communication between human movements and the computer, where sound and video image are controlled by virtual music instruments in real-time through computers. Lately, he has been creating the robots, which perform acoustic instruments, and he is gradually constructing a robot orchestra.

About: Suguru Goto explores the extension of the potentialities in the relationship of man and machine. His performance exploits the interaction between the video images representing of the virtual bodies and the body of the performers on stage, which can transform these images into real-time, thanks to his BodySuit. A puzzle is created around the differences and of the resemblances between real body and virtual body. This work is based upon the concepts of Transhumanism, Androids and Post-humanity. The Japanese composer, media artist and performer, Suguru Goto who works at IRCAM, invented his controllers of gestures and other body continuations. This presents his neofuturist performance. Its synopsis could be as follows: a dancer lost his two feet in an accident, replaced by a machine. Thanks to it, he can from now on jump higher and run more quickly than the ordinary man. However, it has especially new choreographic capacities inaccessible to the common run of people… In his performance, Suguru Goto implements this extension of the man-machine relations and offers a state of the elements on the evolution of the human body and its cognitive capacities thanks to science and with technology. With its two dancers, Shu Okuno and Chiharu Otake, he exploits the interaction between the video representation of virtual bodies and the real bodies which is presented on scene and, transform these images with BodySuit in real-time. Synopsis: A dancer lost his both feet due to an accident in the past. His foot was supplemented with the machine. Now he is able to jump higher than usual man and he can run quickly, thanks to this machine. Moreover, it is not limited to moving ability only, but the special capability of dance which usual man cannot do, became possible, too. Thus, it provides a new possibility of performance. Transhumanism is philosophy that talks about evolution of human’s body and cognitive ability by using a new science and technology. Transhumanism is also research of expansion of human’s function with development of technology in future. In general, Transhumanism supports a new science and technology, for instance, nanotechnology, biotechnology, information technology, cognitive science, virtual reality, the artificial intelligence, and so on. Following these ideas, the researches on the extension of longevity by the medicine, the gene manipulation, strengthening a body, the connection between brains and a computer, etc. are done actually. The Transhumanist thinks that one should use these science and technologies so that man may become human that goes beyond the actual capabilities. Posthuman is based on the concept by this Transhumanism. It is a hypothesis in the future, and it is assumed, “because the basic ability goes beyond the one compared with a present human race, it cannot be called as human in a modern sense”. It can be sometimes explained that the Posthuman is invented by combining the extreme strengthening of man and natural evolution of human. When we see the fact that the medicine which remodels the character of person, is widely used now, we understand how much man wishes to change himself with the technology. Hereafter, these psychotropic drug that modifies the character, will be sign as for what we will be able to expect in near future. Perhaps we are already starting the age of the Posthuman. In near future, we will get the capabilities that change the human nature thanks to the technology. A lot of people will accept this power with the slogan of man’s “freedom”. Everyone hopes the freedom of choice, such as freedom of what kind of child parents give birth, freedom for a scientist to advance his research, or freedom that the enterprises try to profit as much as possible by use of technology. However, these sorts of freedom is different from what people really wishes. What the political liberty so far means is the purpose to establish freedom, which is based upon our nature. The truth of freedom means the one that defends the sense of the most important values in the societies. It is not a mechanism of technology that exposes man to the worst threat for a potential death. In fact, an actual threat is always caused in the nature of humankind. The treat is the rule that tries a person to be in the existed frame only. Thus, it becomes impossible to experience the original truth. Detailed Description of the Gesture Controller – “BodySuit” “BodySuit” has 12 sensors, which are placed on each joint of the body, such as a wrist, an elbow, a shoulder on the left and right arm an ankle, a knee, and the beginning of the left leg and right leg. The bending sensors are placed on the outer sides of the arms and on the front sides of the legs and fixed on a suit. Each sensor is connected with a cable to a box, and then it is connected with A/D interface. Therefore, his gesture doesn’t have to be based upon playing an instrument, but could be liberated to become a larger gesture, like a mime. This allows for collaboration with a person in a different field, for instance a dancer or an actor. The audience easily observes this larger movement. That is to say it can be well adapted to a performance and musical theater situation. Since this is not like a physical controller or instrument, which is held by hands, it allows to be collaborated with the idea, ” Augmented Body” or “Extended Body” in the work. His body is amplified by electric signals to control something remotely or to be extended from his abstract gesture to a meaningful gesture. Concept Suguru Goto explores the extension of the potentialities in the man-machine relation. Its performance plays on interaction between the video images representing of the virtual bodies and the real body, present on scene, which can, thanks to its BodySuit, transform these images in real-time. A puzzle is created around the differences and of the resemblances between the real and virtual body.