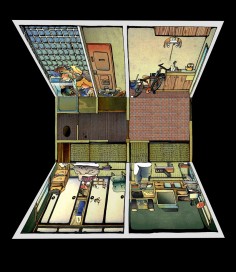 Proud to present DANDAN, a solo exhibition by Japanese artist Tabaimo, opening September 15th and running through October 29th, 2011. This is the third solo exhibition at the gallery by the 35-year old Tabaimo, recognized as one of Japan’s leading artists and well-known for her hand-drawn animations whose coloration bring to mind traditional ukiyo-e prints.

exhibitionsly, Tabaimo is representing Japan at the 54th Biennale di Venezia with the work teleco-soup, an immersive multi-media environment that transforms the Japanese Pavilion into the interior of a well, where the reflected world is inverted and boundaries between water and sky, self and world, real and imagined are fluid. To view installation images: please click here.

Taking on roles as both social critic and a voice of those born in the mid 1970’s, Tabaimo strives to investigate the inter-generational divide. As globalization pervades an island nation that once prided itself on isolationism, communal traditions continue to give way to contemporary desires of individualization. Tabaimo’s work offers an unblinking look at contemporary Japanese society as a mirror in which to view herself and other members of her generation caught in the crossfire of these societal shifts. Her works capture the anxiety that is a constant reality in a land whose terra firma is less than stable, while their tone remains abstract and detached. Recurring motifs, including cityscapes, interior spaces, hands, brains, hair, insects, plants and water, hover between the elegantly rendered and the disturbingly surreal.

Two of the works on view at James Cohan Gallery, BLOW and danDAN, were first shown in Danmen, a solo exhibition that originated at the Yokohama Museum of Art in 2009 and traveled to the National Museum of Art, Osaka. These two works are multi-channel video and sound installations presented on elaborately built stage sets. In addition, the exhibition features guignorama, a single-channel work first exhibited in the artist’s solo exhibition at the Hara Museum in 2006. This gallery exhibition marks the first time these works are shown in the United States.

The central work in the main gallery, BLOW, 2009, is projected onto a curved half-pipe ramp. The viewer is invited to walk through the seamless, multi-channel projection in which human bones, organs and blood vessels surface from a watery world and morph into forms that recall the origins of life emerging from the primordial soup.

In Gallery 3, danDAN, 2009, is projected onto three angled panels that run vertically from floor to ceiling. This work portrays a cross-section of a housing complex of multiple dwellings, through which the viewer peers into traditionally-styled apartments alongside those with more modernized conveniences. In these spaces, strange events happen: birds fly inside rooms, a woman spins in a washing machine, a man walks into a refrigerator, the peck of a bird’s beak causes blood to flow from a bed, and clothes turn into birds and fly away.

In the front gallery, guignorama, 2006, depicts veined hands grasping, grappling and locking together in fluid motion—the pulsating blood vessels creating an emotionally fraught landscape. The artist has suffered from severe eczema and, as a result, the recurring motifs of hands and skin have come to represent the boundary between interior and exterior worlds.

Born in Hyogo Prefecture in 1975, Tabaimo studied in the Department of Information Design at Kyoto University of Art and Design, and received almost immediate acclaim for her graduation project, a video installation called Japanese Kitchen (1999).
Set in a public housing complex, in this animated work dealing with aspects of a housewife’s everyday life, Tabaimo casts a cool eye over the problems facing contemporary Japanese society and imbues her creation with a venomous streak. While producing animation by computerizing hundreds, sometimes thousands of hand-drawn images, Tabaimo’s use of pen or ink outlines and color tones that recall Hiroshige’s ukiyo-e prints is the basis of a unique style that is somehow tinged with a sense of nostalgia.
After subsequently showing her work at international exhibitions including the Yokohama Triennale, São Paulo Biennial, and Venice Biennale, and holding solo shows at the Fondation Cartier in Paris, Hara Museum in Tokyo, and the Parasol Unit in London, Tabaimo has now been selected to represent Japan at the 54th Venice Biennale, scheduled for June of next year, increasing expectations for her wide range of activities.
The title of this exhibition, “DANMEN,” was coined by the artist to refer to her generation of Japanese as it compares to the baby-boom generation. Tabaimo believes that this generation, born in the 1970s, which holds a special regard for the individual, has led to the emergence of a new reality based on a three-dimensional world consisting of an accumulation of two-dimensional sections danmen inspired by an understanding of the individual in terms of sections. This view can be seen as part of a development that began with the artist’s movement from outside to inside, and society to the individual in her early work, and a return from the inside and individual to the outside. We hope that you will enjoy your visit to Tabaimo’s world in her first solo exhibition in Kansai for seven years.
.
.
.
.
.
.
.
source: vimeo

Tabaimo (b.1975) converts her hand-drawn images into animation on a computer and incorporates them into installations using multi-projection and other means of expression. In 2009, 10 years after her debut, her major solo exhibition : “DANMEN” was shown at Yokohama Museum of Art and at The National Museum of Art, Osaka (2010). The film documents the three years prior to the exhibition and includes interviews in which she reflects on each project.

Featuring Chanel’s “MOBILE ART” , “Manga!” at Louisiana Museum of Contemporary Art, her solo exhibition at Moderna Museet and her residency at the Singapore Tyler Print Institute in Singapore, the film contains 11 works of the artist as well as their production process and shows how her large installation comes into being.
Tabaimo has been selected to represent Japan at the 2011 Venice Biennale.
Directed by Yasushi Kishimoto
.
.
.
.
.
.
.
source: philagrafika2010org

TABAIMO (Ayako Tabata) Hyogo, Japan, 1975; currently based in Nagano. Graduated Kyoto University of Art and Design, 1999. Her work was shown in the Yokohama Triennial in 2001 and biennials in Valencia (2001), Sao Paulo (2002) and Venice (2007); solo exhibitions at the Hara Museum of Art, Tokyo and the Fondation Cartier pour l’art contemporain, Paris, 2006; major exhibition of her work to be held at the Yokohama Museum of Art, winter 2009-2010

Tabaimo’s extraordinary video installations often focus on communal spaces such as public restrooms, commuter trains, and bathhouses, where anonymity and intimacy collide. Through such projects she explores the undercurrents that can disrupt the orderly surface of contemporary Japanese society. Seemingly mundane tasks and events often take absurd, comical, and occasionally grotesque twists in Tabaimo’s work. Her imagery draws from the aesthetics as well as the urban and domestic subjects of traditional Japanese Ukiyo-e woodcuts in addition to the iconic and sometimes violent narratives of Japanese comics (manga) and animation (anime). Tabaimo translates the wood grain patterning and softly blended veils of color found in Japanese woodcut prints and the slick visual short-hand used in manga and anime into elegant hand-drawn video animations.

The interaction of the audience with the video is crucial to the artist. She meticulously installs her videos in well-defined spaces or stage-like settings in which they directly confront the viewer and are typically shown on a human-size or slightly larger scale to more fully encompass the viewer in the work. The level of engagement she seeks (though vastly different in presentation) may also be compared to printed forms such as woodcuts and manga, both in the vital role of the audience to whom the images are disseminated and the manner in which people experience them – close-up, personal encounters designed for contemplation.Tabaimo is intrigued by the idea of coexisting layers of reality and the variation in people’s perceptions of the same event: do viewers directly identify with the figures in her images? Imagine themselves in the settings? Or are they simply spectator/voyeurs? The artist provocatively engages the viewer with unanswerable questions in her works, encouraging us to reconsider our relationship to the world in which we live. The U.S. debut of her installation video, Dolefull House, 2007 will be presented in the Museum’s Stieglitz gallery.
.
.
.
.
.
.
.
source: arttattler

Tabaimo, born 1975 in Hyogo, Japan, is currently based in Nagano. She graduated from the Kyoto University of Art and Design in 1999, receiving the Kirin Contemporary Award grand prize for her graduation work Japanese Kitchen. She participated in the triennial in Yokohama in 2001 and the biennials in Valencia in 2001, Sao Paulo in 2002, Sydney in 2006 and Venice in 2007. Most recently, Tabaimo has had solo exhibitions at the Yokohama Museum of Art, Japan, the James Cohan Gallery, New York, Gallery Koyanagi, Japan, and Fondation Cartier pour l’art contemporain, Paris. Her work was included in the group exhibition Momentary Momentum: Animated Drawings at Parasol unit in 2007, which travelled to Kettle’s Yard Gallery, part of the University of Cambridge.

Tabaimo (born 1975) has won acclaim for her captivating, sometimes disturbing animations. Her art merges social satire and personal experience. She works primarily with video installation, where film is projected in a demarcated space, part room, part stage, inviting viewers to participate and contribute to the work.

She investigates identity issues, female experience and the individual’s place in the collective. Often set in a trivial, everyday environment where the course of events and characters are driven toward the absurd, comic. and at times grotesque. ”I don’t feel it necessary to portray the world as it really is,” she says. Contemporary Japan meets fable and obsession in these self-willed drawings that borrow from and break the rules of the traditional woodcut.
.
.
.
.
.
.
.
source: pbsorg

Tabaimo was born in Hyogo, Japan in 1975. Tabaimo’s drawings and video installations probe the unsettling themes of isolation, contagion, and instability that seem to lurk beneath daily existence in contemporary Japan. She draws aesthetic inspiration for her animated videos from a combination of Japanese art forms—ukiyoe woodcuts, manga, and anime—while she often sets her layered, surrealistic narratives in domestic interiors and communal spaces such as public restrooms, commuter trains, and bathhouses. Tabaimo populates her work with uncanny characters that, either through mutation or as victims of inexplicable violence, become fragmented in their relationships to the environment and their own identity. Installed in theatrical, stage-like settings, her work is attuned to the architecture and the viewers within it. Tabaimo graduated from Kyoto University of Art and Design (1999). Her work has appeared in major exhibitions at the Venice Biennale (2011, 2007); Parasol unit foundation for contemporary art, London (2010, 2007); Yokohama Museum of Art, Tokyo (2010); National Museum of Art, Osaka (2010); Philadelphia Museum of Art (2010); Moderna Museet, Stockholm (2009); Museum of Contemporary Art, Los Angeles (2007); Fondation Cartier pour l’art contemporain, Paris (2006); Hara Museum of Contemporary Art, Tokyo (2006, 2003); Israel Museum, Jerusalem (2005); National Gallery of Victoria, Melbourne (2004); Walker Art Center, Minneapolis (2003); and the São Paulo Bienal (2002). Tabaimo lives and works in Nagano, Japan.
.
.
.
.
.
.
.
source: danzaballet