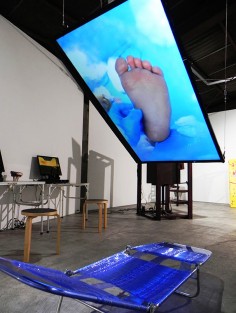 An entire two floors are devoted to the work of Fuyuhiko Takata. On display are video pieces including “Japan Erection” (2010), “Many Classic Moments” (2011), “Venus Anal Trap” (2012), and “Love Exercise” (2013), as well a new video and installation art. “Japan Erection,” a representative piece that has had 1.7 million views of YouTube, shows Takata wearing a large Japan-shaped model of a phallus, with which he knocks over objects and destroys a small room. In the new videos, Takata films a performance that involves placing sculptures of the heads of prominent female artists such as Frida Kahlo and Georgia O’Keeffe on totem poles.
.
.
.
.
.
.
.
source: artinasia

Fuyuhiko Takata has worked on video art as well as performance and photography. This exhibition is his first solo at Kodama gallery, and before it, he has announced his shocking work which got a wide attention from the audience in a group exhibition at Shirokane Art Complex.