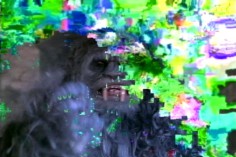 Underlining the temporality of nostalgia, memory, and narratives crafted through cinematic pop culture, the American artist Takeshi Murata has constructed a body of animated works that explore the lifespan of moving images and their role in the shaping of shared cultural histories.

Whether abstracting footage culled from 1980s blockbusters like Rambo into a vibrant slurry of sight and sound, or slowing down the introductory credit sequence of the 1970s sitcom Three’s Company to a cryptic melancholic pace, as well as reworking the melodramatic prize package revealing moments from the game show, The Price is Right, Murata employs a variety of animation processes to highlight the decay of media narratives.
.
.
.
.
.
.
.
source: eaiorg

Takeshi Murata continues to push the boundaries of digitally manipulated psychedelia. In Monster Movie Murata employs an exacting frame-by-frame technique to turn a bit of B-movie footage (from the 1981 film Caveman) into a seething, fragmented morass of color and shape that decomposes and reconstitutes itself thirty times per second.
.
.
.
.
.
.
.
source: laimyours

The piece is Monster Movie and is a four minute mind melting bastardization of the monster from the 1981 Ringo Star led film dud, Caveman. The film is known to be Murata’s masterpiece, where he warps this cheesy monster into a sea of bright color, the creature tripping over itself on repeat, swirling bright colors as if someone is repeatedly stomping in a puddle of gasoline. The piece is set to frenetic music that sounds a bit like Pixeltan on LSD. It’s a remarkable little film that just folds and refolds and continues to fold itself and the monster until it’s just moving color. It really is brilliant. Imagine watching that alone with three other video art pieces of his on a loop in a small dark room with the sound blasting? I went to the show three times and must have sat in that room for about two hours over the course of the trips.