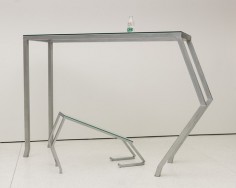 Tang Da Wu is credited as the founder of the Artists Village, a collective that has since its inception in 1988 become synonymous with experimental art in Singapore. Tang’s practice, which spans painting, drawing, sculpture, installation, and performance art, is notable for its subtly poetic deconstruction of historical and cultural conditions. His three-part sculpture Our Children (2012) references a story from Teochew opera (a variant of the form distinct to the southern Chinese region from which the artist’s family hails), in which a young boy experiences illumination at the humbling sight of a baby goat genuflecting while suckling at its mother. This image is intended as a parable of the timeless virtues of respect and filial piety, and of the importance of cultural values.

In Tang’s stylized tableau, the goats are wrought in galvanized steel and glass, the act of receiving nourishment represented by a bottle of milk that sits atop the structure. The ensemble calls to mind the Chinese domestic ancestral altar, at which offerings, prayers, and entreaties to one’s forebears are performed in recognition of history, ancestry, and veneration of age-old wisdom. Inscribed on the bottle, which also represents the necessity of nourishment to future generations, are the characters 林道. This refers to a forest pathway or trail, and in the sculpture is a metaphoric allusion to the theme of insight.

Our Children also demonstrates Tang’s skillful distillation of concept and commentary into a visual message and a prompt to reflection. In this work, the two figures appear in dynamic tension and resemble Chinese characters, bringing to life the narrative theme in spare lines and forms. (The parable itself is less smoothly concluded, the boy tragically failing to reconcile with his mother after his revelation.) Recalling Tang’s seminal early work Tiger’s Whip (1991), a commentary on the exploitation of tigers for their organs’ supposed aphrodisiac powers, the work sees Tang explore the interaction of nature and culture. Investigative, r
.
.
.
.
.
.
.
source: guggenheimorg

Tang Da Wu was born in 1943. Growing up, he disliked studying English and mathematics and was often scolded by his teachers. He preferred playing after school with neighborhood children, and also enjoyed drawing, gaining further confidence when his high-school paintings were accepted into art competitions.

In 1988, Tang founded the Artists Village, Singapore’s first art colony, with the aim of encouraging experimentation. Members of the Village were among the first non-traditional artists in Singapore, and also among the first to begin practicing installation and performance art. There, Tang has mentored younger artists and shared his knowledge of artistic developments in other parts of the world.

In addition to his work as an artist and activist, Tang teaches art education at the National Institute of Education (NIE). He has expressed great concern for the current state of education, having encountered numerous young adults who are afraid to give the “wrong answer,” and who retreat from experimentation and innovation. He wonders how we can nurture a future generation to be fearless in their pursuit of knowledge and experience, and dreams of setting up a forum on art education to consider ways to support creativity.

Tang works in many mediums including painting, drawing, sculpture, installation, and performance. In Our Children, he refers to a story from Chinese opera in Teochew, a region in South China from which his family hails. The story focuses on the virtue of respect for one’s parents (“filial piety”) and the importance of cultural values, and the artist’s sculpture represents an abstracted baby goat kneeling beneath its mother. The act of suckling is represented by a pitcher of milk that sits atop the steel-and-glass form.

In the Teochew parable, a young boy experiences a humbling moment of enlightenment at the sight of a kneeling baby goat being fed by its mother. In Our Children, the two figures, while seemingly stationary, are also in dynamic tension, and resemble Chinese characters, symbolizing the narrative in spare strokes and lines.

For Tang, aesthetic expression is not only representative but also has the potential to provoke action and change. Our Children demonstrates Tang’s skillful transfiguration of idea into form. He believes in the potential of the individual and the collective to effect social change, and through his art aims to nudge society toward a greater awareness of environmental and social issues.
.
.
.
.
.
.
.
source: guggenheimorg

Through performance, installation, painting, sculpture, and drawing, Tang Da Wu explores social and environmental themes including deforestation, animal endangerment, and urban transformation. Acquired for the Guggenheim’s collection, his three-part sculpture Our Children (2012) references a story from Teochew opera in which a young boy experiences illumination at the sight of a baby goat suckling at its mother. Tang is credited as the founder of the Artists Village, a collective that has become synonymous with experimental art in Singapore. In 1999, he was awarded the 10th Fukuoka Asian Culture Prize in Arts and Culture. He has had solo exhibitions at Valentine Willie Fine Art, Kuala Lumpur (2006); and Goodman Arts Centre, Singapore (2011), and was featured in the Singapore Pavilion at the Venice Biennale in 2007. Tang lives and works in Singapore.