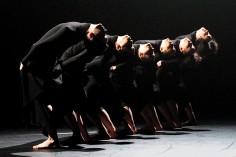 “The words “mesmerising” and “hypnotic” are often scattered about like confetti when describing contemporary dance. In the case of China’s Tao Dance Theatre, they are unusually apt.” Telegraph

“The dance moved like a force of nature” Financial Times

TAO Dance Theatre performs a brand new double bill as part of Dance Umbrella, performing for the first time on the main stage at Sadler’s Wells following sell out shows in the Lilian Baylis Studio.

Formed in 2008 by Beijing-based choreographer Tao Ye, TAO Dance Theatre is known for creating dances that have a mesmeric, trance-like quality. In 6 & 7, Tao Ye continues his numbered series of experimentations that explore the potential of the human body as a purely visual form, freed from the constraints of story-telling or representation.

In 6, his six dancers move in dynamic and hypnotising unison, in a shifting landscape of light created by Swedish lighting designer Ellen Ruge. His latest work 7 continues Tao Ye’s fascination with pattern, precision and ritual, and is distinguished by a sound track of acoustic effects generated by the seven dancers’ own bodies. Both 6 & 7 will be accompanied by specially commissioned music from Chinese indie folk composer Xiao He.
.
.
.
.
.
.
.
source: telegraphcouk

The words “mesmerising” and “hypnotic” are often scattered about like confetti when describing contemporary dance. In the case of China’s Tao Dance Theatre, they are unusually apt.

Here as part of this year’s Dance Umbrella festival, the company – just eight years old – is offering two minimalist pieces: the first a UK premiere, the second a world premiere, and both of them part of TDT artistic director Tao Ye’s ongoing, enumerated exploration into the nature of movement.

6 (for six dancers – you get the idea) begins with a stage almost entirely obscured by smoke. A single, bowed note sounds continuously, and overhead shafts of light come and go, like the sun repeatedly trying and not quite managing to penetrate clouds.
Through the gloom, you can intermittently make what at first looks almost like a strange, single organism, more or less rooted to the spot, but pulsating backwards and forwards and from side to side. As Xiao He’s atmospheric score builds, and the murk lifts just slightly, you confirm that this is Tao’s sextet of dancers, clad in black, ankle-length elasticated dress-like costumes, standing in a row diagonally to the audience, and repeating ad infinitum a fixed but fluid sequence of movements.
Rippling their hips and torsos, rolling their heads from side to side, arching back and craning forward, these astonishingly fit, resilient and consistent dancers could be trees in the wind, anemones in a current of water, or something out of this world, an undefinability that is very much the point of the exercise.

Tao’s lofty mission is to encourage the audience to strip away all preconceptions, observe movement unencumbered by meaning, “and finally begin to walk into the unknown”. And, although I admittedly never quite forgot I was in norf London, and 40 minutes or so proves quite a long time to watch repeats of the same 10-second pattern (albeit with several variations as the piece progresses), 6 does have a genuinely trance-like quality to it.

Half the earlier piece’s length, 7 is a kind of yin to 6’s yang. Executing identical motions to before, the now seven dancers are here clad in white versions of 6’s costumes, the stage is brightly lit, and the only sound is now a steady hum coming from the dancers and picked up by wafer-thin microphones dangling above them.
Quite early on, as this vocalising builds, there is a minute or two of polyphonic eeriness reminiscent of Legeti’s Requiem (which three times accompanies the appearance of the monolith in Kubrick’s 2001). Otherwise, beyond this contrast for contrast’s sake, it is hard to see what 7 brings to the table, and it is definitely its pre-interval predecessor that makes the more lasting impression.
.
.
.
.
.
.
.
source: danceumbrellacouk

Founded in 1978, Dance Umbrella is internationally recognised for its annual festival which takes place each October. In addition, projects supporting artists and engaging the public with choreography now take place year-round. To date, Dance Umbrella has reached audiences of over one million people in London.

Dance Umbrella is an Arts Award Supporter. Arts Award is a unique range of multi-level qualifications for children and young people aged up to 25 years to develop as artists and arts leaders, developing and sharing their creativity, leadership and communication skills. It provides opportunities for individuals, schools and youth groups to connect to the world of professional artists.

Dance Umbrella will provide opportunities for young people to engage with the festival and festival staff. Each year the programme will include professional performances specifically for children and young people, providing opportunities linked to that work as well as other shows in the festival. These will broadly include the chance for young people to see international contemporary choreography, to review shows, obtain first-hand knowledge of how an arts organisation and dance festival works, have access to festival artists, participate in one-off performances, and opportunities for short term work placements.
.
.
.
.
.
.
.
source: baikebaidu