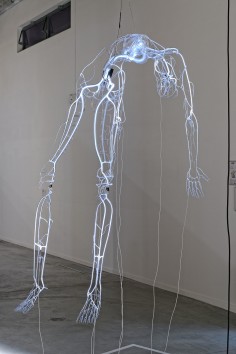 “This neon and glass sculpture represents the cardiovascular system of astronaut Sally Ride shortly after her return to earth. The human body adapts to periods of prolonged weightlessness. When gravity suddenly returns, the blood pools in the lower extremities, and blood pressure drops. This condition is known as orthostatic intolerance. Hanging upside down can cause blood to pool around the heart, a potentially lethal condition. The awkward position shown above helps blood reach the brain without causing pooling around the heart.”
.
.
.
.
.
.
.
source: venicebahamas2013org

Tavares Strachan was born in 1979 in Nassau, Bahamas. After studying painting and liberal arts at both College of the Bahamas in Nassau and at Brown, he received a BFA from the Rhode Island School of Design, where he studied glass, and an MFA in sculpture from Yale University. Recurring themes in Strachan’s work include invisibility, displacement (both physical and metaphorical), and the capacity of both persons and matter to withstand inhospitable environments. Strachan’s work emphasizes the migratory, cross-cultural nature of contemporary artistic production, and unsettles canonized histories and geographies.

One of Strachan’s most iconic projects, The Distance Between What We Have and What We Want (2006), consisted of a 4.5-ton block of ice. Harvested in a river near Mount McKinley, then shipped Federal Express to the Bahamas, it was exhibited in transparent, freezer at a primary school in Nassau, where solar power kept it frozen. Over the past decade, Strachan’s explorations have expanded to both outer space and under water. A major focus has been orthostatic tolerance—the body’s ability to circumvent hypotension and withstand pressure during gravitational stress, often caused by quick changes of altitude, or the more extreme circumstances of being launched into the earth’s stratosphere or submerged to the oceans’ depths.

Strachan’s research on the topic has extended to hands-on training at the Yuri Gagarin Russian State Science Research Cosmonaut Training Center in Star City, Russia; a journey to the Arctic in commemoration of the 1909 journey of African-American explorer Matthew Henson; and a residency at the Massachusetts Institute of Technology, where he worked with some of the institution’s cutting-edge scientists. It also led to the establishment of the nascent Bahamian Aerospace and Sea Exploration Center in the Bahamas (BASEC). In the course of working with BASEC, Strachan has made several rockets wholly from Bahamian natural resources (glass from beach sand, and fuel from sugarcane) and launched them 15 to 20 miles into the earth’s stratosphere, before collecting and presenting their fallen remnants as sculptural relics.

Last year a 20,000-square-foot overview of Strachan’s work from 2003–2011, subtitled Seen/Unseen,was presented at an undisclosed New York City location and was closed to the public. Tavares Strachan: seen/unseen is fully documented with a forthcoming catalogue, designed by Stefan Sagmeister. Strachan’s solo exhibitions include Orthostatic Tolerance: It Might Not Be Such a Bad Idea if I Never Went Home Again, MIT List Visual Arts Center, Cambridge, MA (2010); Orthostatic Tolerance: Launching from an Infinite Distance, Grand Arts, Kansas City, MO (2010); Tavares Strachan: Orthostatic Tolerance, the Institute of Contemporary Art, University of Pennsylvania, Philadelphia (2009); Where We Are is Always Miles Away, The Luggage Store, San Francisco, CA (2006); and The Difference Between What We Have and What We Want, Albury Sayle Primary School, Nassau, The Bahamas (2006).

Strachan lives and works in New York City.
.
.
.
.
.
.
.
source: artadoo
Strachan was born in Nassau, the capital city of the Bahamas, in 1979, six years after the country gained independence from British rule. His father was a policeman and his mother was a seamstress. The second eldest of six boys, Strachan was introduced to the arts as a child through his family’s involvement in Junkanoo, a historical annual parade and cultural celebration incorporating live music, dance, and elaborate costumes hand-made by competing groups. These early experiences provided the foundation for Strachan’s understanding of materials, process, collaboration, and community.
Initially a painter, Strachan earned his Associate of Fine Arts degree from the College of the Bahamas in 1999. In 2000, he moved to the US to enroll in the glass department at the Rhode Island School of Design, where he began to pursue more conceptual projects that would foreground the prevalent themes and minimalist aesthetic of his later work. After completing his Bachelor of Fine Arts degree at the Rhode Island School of Design in 2003,[1] Strachan went on to earn his Master of Fine Arts degree in Sculpture from Yale University in 2006. Eager to discover the world beyond the Caribbean and ever aware of his tenuous circumstances as a foreign scholarship-based student, Strachan learned to question the boundaries of what was possible and impossible in matters of life and art. This dichotomy continues to be central to the artist’s practice.