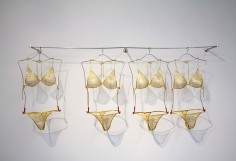 Born in Gaibandha in 1969, Tayeba Begum Lipi has been living in Dhaka for the past twenty-five years. She studied drawing and painting at the Institute of Fine Art, University of Dhaka until 1993. She is one of the Founder- Trustees of Britto Arts Trust, where she played a major role as coordinator since its inception in 2002 until 2007. Her curations include several international large-scale projects, as well as recently being the commissioner for Parables: Bangladesh Pavilion at the 54th International Art Exhibition, La Biennale di Venezia, 2011.

Tayeba Begum Lipi was born in 1969 in Gaibandha, Bangladesh. She completed an MFA in drawing and painting at the Institute of Fine Arts, University of Dhaka, Bangladesh, in 1993. In 2002, she cofounded Britto Arts Trust, Bangladesh’s first artist-run alternative arts platform, dedicated to organizing exhibitions, enabling international dialogue and exchange, and providing support to the country’s artists through residencies, workshops, and funding. Lipi’s practice engages painting, printmaking, installation, and video to comment on themes including the politics of gender and female identity.

For the video I Wed Myself (2010), Lipi portrays a bride with traditional makeup and formal attire preparing for her wedding, then crops her hair and adds a moustache to also adopt the role of groom. Juxtaposing these two roles within a single frame, she stands as both husband- and wife-to-be on the wedding stage, a video of the transformation process projected alongside. By adopting this dual personality, Lipi inquires into the definition of gender and the possibility of possessing both feminine and masculine traits. Addressing societal contradictions between real identities and those rooted in misogyny, she exposes the importance of questioning the sexualized structures that dominate women’s lives in Bangladesh and beyond. Also using iconography based on femininity is Bizarre and Beautiful (2011), an installation of female undergarments crafted from stainless steel razor blades. A stark contrast to the expected sensual materials, the blades create a rigid armor, offering protection for the imagined wearer while issuing a warning to the onlooker. Inspired by the strong women of her childhood, Lipi’s work questions the representation of women’s bodies and the history of their social roles, particularly in Bangladesh, where historical and religious expectations continue to determine what is permissible.

Lipi was awarded Grand Prize at the Asian Art Biennial, Dhaka, in 2004. She has been an artist-in-residence at the Irish Museum of Modern Art, Dublin (2000); NICA, Yangon, Myanmar (2004); Gasworks International Residency Programme, London (2005); and Studio RM, Lahore, Pakistan (2008). She was the commissioner for the Bangladesh Pavilion at the 54th Venice Biennale (2011) and one of the curators for the Kathmandu International Art Festival, Nepal (2012). She has had solo exhibitions at Alliance Française (1998 and 2004), Gallery 21 (2001), and Bengal Gallery (2007), in Dhaka, and participated in the two-person exhibition Parables of Our Times at Gallery Akar Prakar in Kolkata (2010). Notable group exhibitions include Separating Myth from Reality: Status of Women at the International Art Festival organized by Siddhartha Art Gallery, Kathmandu (2009), Jakarta Biennial (2011), Venice Biennale (2011), and Colombo Art Biennial (2012). Lipi lives and works in Dhaka.