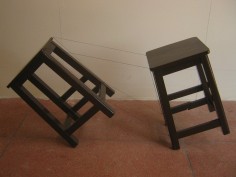 We live today in a realm that has been immensely complexified by the increased movements of human and its progress, and the race gives an inaccurate picture of posterity. In this shift, visual & cultural, material & objects, assemblage, image & perception overlaps create the most fantastic collisions. My practices describe perceptual and conceptual challenges through the mechanisms of juxtaposition, accumulation and metaphor.

My works define structures collapsing, harmonizing & synchronizing, at the same time conjunction between materials and objects depicts my work formally & conceptually surreal. For example the show “Contrapposto” is the state of equilibrium and harmony created by opposite motions. As the evolving of urban civilization accelerates, the emergence of new forms gets more chaotic and unpredictable, and the complexity of structural relationships between their components increases rapidly. The Object(chair) I re-discovered its meaning through my own process. Chair as an object has quality to adjust us sophisticatedly. It is a permanent gesture of ourselves. Human body sets parameter to everything so the gesture of typical chair itself makes a wider sense. In the series, the chair is symbolized with Human. Contrapposto resonates metaphorically with personalities, identities, social awareness and human revolution.

In my practices I challenge the idea of perception and to create the diversity, where the kind of inactive body attracts the active bodies and in a way the active one is more active by the inactive. The moment where the typical notions contradict the co-existing opinion.

Tayyab Tariq is a Neo-Dadaist and his faith in the world of Art is Intense, but not irrational, nor naive. TayyabTariq (bornAugust6th,1988) is a sculptor, he started his art career back in 2005 from Naqsh School of Arts, Lahore. In his artist history, there is an immature but strong period in his art career.

“Since I was 14 years old I started to realize my interest in various unusual activities. I used to juxtapose different domestic objects indifferent spaces, hanged objects in some specific order to construct new language.Constructing small scale dialogues with wooden sticks and natural materials like tree-branches was my favorite activity to construct something else. The time and the practices remained the self-discovery process and at that moment I was completely unaware of Art and the expression of its language”.

I graduated in the discipline of visual arts from Beaconhouse National University Lahore, Pakistan. I’ve completedB.F.Awith the concentration of three dimensional art practices. The traditional art school that I started attending in the age of 18 had catapulted my confidence and triggered me towards the art world.“You won’t find any flower or tree drawings in my sketchbooks! Instead Life drawings, human figurative sketches in hundreds of different postures.In the traditional school they taught me other mediums too such as water color painting,ceramics, clay modeling, motive designing, miniature traditional practice and architectural drafting etc. but the subject I religiously concentrated on was “Human body”. Figurative analysis is the core of my skill and creativity”After completion of three-years diploma from Naqsh School of Arts,I joined a computer college Edge Systems International Lahore where I explored tools like Adobe Photoshop, After Effects, AutoCAD. Later that I taught Computer Design and CAD for one year in the same institute.At the moment when I came to know about the 3Dapplication “Autodesk Maya”it attracted me to sculpt the objects through CGI(computer generated imagery).It was really an interesting experience for me because I could create (sculpt) 3D objects, characters and anything that popped-up in my mind. Two dimensional surface(screen) was responding me in a three dimensional space and it was “fabulous”.

However I experienced both the educational techniques individually,“Digital” (computerized)and “Manual”as well as the “contemporary art making”. Through Beaconhouse National University platform I’m graduated from Visual Arts discipline with the following subjects that I explored in 4 years: Sculpture,Installations, Video Art, Photography, Paintings, Art and Society, History of perception. What is Art? Is it Art? Islamic Art & Architecture, Western Art &Architecture and also contemporary art seminar, Beyond the art making. Although while studying in BNU 2012, the Dean of SVA(School of visual arts) selected me for United Kingdom visit on behalf of excellence in my working style.The visit was fully sponsored by British Council. Ivisitedall the Great Museums & well-known Galleriestherein UK (United Kingdom).Subsequently, “Beaconhouse National University”where I practiced and learned Neo-methodology and explored the word “ART” (critical, theoretical and historical way) quite rigorously which tend to associate myself with Contemporary Art.“

There are three important philosophical structures of my creative-process years:

First:
Ephemeral nature of relationships,juxtaposition of objects. What starts out as triumph soon becomes corrupted into a dialectic of power, leaving only a sense of chaos and the possibility of a Neo.

Second:
Pushed the discovery process constantly through my recent deconstruction/reconstruction practices towards the mysteriousness. I’m interested in everything that has a connection with Materials. I often think that the real essence of arts is when you don’t know what you are doing with materials or objects and in the end;mystery comes out from an unknown process.

Third:
I have a commitment to explore that has not been sought yet.