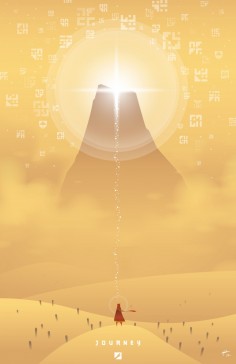 Journey
Enter the world of Journey, the third game from acclaimed developers thatgamecompany and presented by SCEA Santa Monica Studio.
Journey is an interactive parable, an anonymous online adventure to experience a person’s life passage and their intersections with other’s.
You wake alone and surrounded by miles of burning, sprawling desert, and soon discover the looming mountaintop which is your goal.
Faced with rolling sand dunes, age-old ruins, caves and howling winds, your passage will not be an easy one. The goal is to get to the mountaintop, but the experience is discovering who you are, what this place is, and what is your purpose.
Travel and explore this ancient, mysterious world alone, or with a stranger you meet along the way. Soar above ruins and glide across sands as you discover the secrets of a forgotten civilization.
Featuring stunning visuals, haunting music, and unique online gameplay, Journey delivers an experience like no other.

Journey
Enter the world of Journey, the third game from acclaimed developers thatgamecompany and presented by SCEA Santa Monica Studio.
Journey is an interactive parable, an anonymous online adventure to experience a person’s life passage and their intersections with other’s.
You wake alone and surrounded by miles of burning, sprawling desert, and soon discover the looming mountaintop which is your goal.
Faced with rolling sand dunes, age-old ruins, caves and howling winds, your passage will not be an easy one. The goal is to get to the mountaintop, but the experience is discovering who you are, what this place is, and what is your purpose.
Travel and explore this ancient, mysterious world alone, or with a stranger you meet along the way. Soar above ruins and glide across sands as you discover the secrets of a forgotten civilization.
Featuring stunning visuals, haunting music, and unique online gameplay, Journey delivers an experience like no other.
.
.
.
.
.
.
.
source: thatgamecompany

thatgamecompany was founded in the Spring of 2006.
At thatgamecompany, we design and develop artistically crafted, broadly accessible video games that push the boundaries of interactive entertainment. We respect our players and want to contribute meaningful, enriching experiences that touch and inspire them.
We seek talent that values integrity and personal growth within an environment of intense collaboration and experimentation.
.
.
.
.
.
.
.
source: edge-online

It might not have been crowned our Game Of The Year 2012 – that particular prize went to Dishonored – but Journey seems to have scooped nearly every other accolade in the past year. Critically adored around its release, it has since been festooned with a staggering number of awards; it claimed five gongs at the BAFTAs, eight at the DICE awards and dominated GDC’s Game Developer’s Choice Awards. It picked up plenty of other prizes in between, and should have, at the very least, secured the future of its creator Thatgamecompany. It didn’t.

Journey’s PSN release in March 2012 wasn’t just the culmination of three years’ development, it was also the point at which Thatgamecompany had fulfilled its three-game contract with Sony. With the release of Fl0w, Flower and finally Journey, Thatgamecompany was free to do as it pleased. But that also meant that regular income from Sony stopped; with royalty cheques from Journey not expected for several months, Thatgamecompany practically shut down.

“The company was at the most dangerous time when we finished Journey – we didn’t know what was the next deal, who were we working with or who was providing us with money,” Thatgamecompany co-founder Jenova Chen tells us.

Between February and June 2012 Chen watched as most of the team he had worked with for the last three years abandoned the studio. “We didn’t know where the money was coming from, and we couldn’t afford everybody from that point on until we found the money – we basically went into hibernate mode,” he continues. “We had vacation for everybody for a couple of weeks and then we just let go of most of the people, because we couldn’t pay salary.”

The end of a game’s development always sees staff move on, but the number that left Thatgamecompany relative to its modest size – including Chen’s fellow co-founder Kellee Santiago – was alarming. Chen, however, felt is was a natural consequence of its longer-than-expected Sony deal.

“We had a contract with Sony for the past six years, and most are obligated to stay and fill the contract,” he explains. “So it’s not a surprise that some people, over the course of several years, figure out that they’d prefer a different goal. But it was the contract that locked us to together and we had to finish together.”

“You know, nobody knew Journey was going to take three years so at the end of Journey, it was the end of the Sony contract – it’s a very good point for people to move out, so having people leaving is not surprising to me. But Kellee leaving is unique because she was the co-founder with me, so that might be surprising, but for other people I think it’s natural.”

Rescue came in the form of Benchmark Capital. The venture capitalist firm invested enough to allow Chen to re-recruit many of those who went on an extended holiday. Thatgamecompany is now back to around 12 staff, only half of which worked on Journey. After it swept the board at the Game Developer’s Choice Awards earlier this year, Chen gathered together everyone that had worked at Thatgamecompany, past and present. They had a celebratory dinner, but it was bittersweet.

“That was kind of an interesting end to an era,” says Chen. “It’s an experience in your life that we will never forget because, after all, we’ve made some history. You know, no indie game has won all these awards, it is unheard of. And so most people who have left Thatgamecompany are still very grateful for the whole experience, and people who are new to Thatgamecompany are very excited about how are we going to top this game. It was a very positive dinner because of the awards, but in reality everybody’s onto the next thing now.”

Beyond a few press interviews and other promotional activities around Journey – “whenever Sony needs me to do an interview I will show up” – Chen and his team have been working on the next project for over a year. Is it strange, we wonder, to still have people talking about, and giving awards to, something you finished so long ago?

“It is,” replies Chen. “You know it’s kind of like… I have a friend who, when we were at school, won the student Oscar when she graduated. But a year later, two years later, three years later, people are still talking about the Oscar, but she just wants to move on. She wants to talk about the new thing and that’s kind of the same thing, you know? That’s how I feel.”

And yet the fan mail and plaudits continue. Thatgamecompany has received over 900 “very long fan mails” in which players thank the studio, or explain how Journey relates to them in a special way. “A lot of them are really moving; I would say it’s even more moving than the game itself,” says Chen.

Chen describes correspondence with a war veteran amputee who had sustained a brain injury. He told Thagamecompany that playing Journey helped him to stay strong, stay positive and to be with his family. Some Journey players who had recently lost a parent have been playing the game to work through their grief, projecting their thoughts onto the other player as a kind of parent figure. “By walking through the whole game with this character, by walking into the light, they felt they’ve managed to say goodbye to their parents,” says Chen. “Stories like that – there are so many of them. I just totally didn’t see the game having that much power, to make other peoples’ lives better. It was eye opening to me.”

It’s an assertion Chen is uncomfortable with. “That’s Asher’s opinion,” he tells us. “It is exciting because we are walking into new territory which we thought nobody was walking into, so I can see why Asher is excited about that. But it is very early to say ‘oh we’re definitely change the industry.‘ I can’t make guarantees like that.”

What the next game will do is build on the themes set down in Thatgamecompany’s previous work. In particular, it will explore the idea of emotional connection between players, as Journey did so successfully. In fact, every Thatgamecompany release has been an unofficial extension of the last, says Chen. “With the new game there’s something even more ambitious that we’re trying, so it’s a little bit too early to say we will do this or that.”

“We intend to put it out on as many platforms as possible, and currently we are looking at a universal control [scheme] which is touch control because it is literally on all the platforms. So we’ve been having fun just exploring that area because we are always giving the gamer new controls, we were the first to really push the tilt on the Sixaxis controller, so we feel we can do something brand new in touch as well. But the more important part of our game is actually the multiplayer experience now – bringing a new emotion between the players in the game and between each other.”

Chen isn’t saying any more about Thatgamecompany’s next project, for fear of hyping it up too much. Despite twelve months of near-constant praise and prizes for Journey, Chen remains among the humblest game creators we’ve yet encountered. ”No matter how many awards we won, that’s not going to make sure the next game is going to be great,” he adds, with a determined air. “We’re enjoying it, we’re enjoying awards and we really appreciate that the industry recognises what we did; that all the hard work really paid off, But deep down you must still think: ‘awards don’t give me salvation’.”