Performance for the Pringle SS16 show 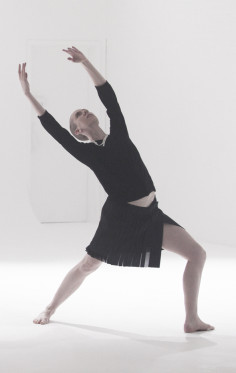 As part of Pringle of Scotland bicentennial celebrations, the spring / summer 16 collection launches with a Michael Clark live performance at the Galleria Sozzani.

The famous dance company wore a combination of heritage Pringle of Scotland knitwear from as early as 1915 combined with the brand new Menswear SS16 knitwear pieces, revealed for the first time during the show.

The live performance was commissioned as part of the Pringle of Scotland Fully Fashioned Exhibition and 200 Years Celebrations which includes three films of the dancers on display at the exhibition in Edinburgh at the National Museum Scotland.
.
.
.
.
.
.
.
source: michaelclarkcompany
Hailed as “British dance’s true iconoclast”, Michael Clark is a defining cultural figure. Since emerging in the 1980s as a prodigy at London’s Royal Ballet School, he has remained at the forefront of innovation in dance, collaborating with – among others – such compelling artists as Sarah Lucas, Leigh Bowery, Peter Doig and Charles Atlas, and musicians Mark E. Smith, Wire, Scritti Politti and Relaxed Muscle.

From the outset, Michael Clark’s performances have been marked by a mixture of technical rigour and experimentation, intense and fine-tuned choreography intersecting with elements of punk, Dada, pop and rock. His productions repeatedly break new ground, provoking and electrifying audiences. As The Guardian noted of a recent performance at the Barbican, London: “throughout the evening, the dancers’ prodigious command and affectless efficiency make them look superhuman.”

Michael Clark founded his own company in 1984. It has since toured worldwide to perform at leading houses in Europe, North America, Asia and Australia, as well as on its home stage at the Barbican, where it has been a resident company since 2005. Michael Clark Company has also introduced dance to new audiences both by performing at unorthodox venues such as the Glastonbury Festival, the legendary Barrowland Ballroom in Glasgow, the Turbine Hall at Tate Modern in London and in the Whitney Biennial 2012 in New York where the company occupied an entire floor for four weeks, and through Clark’s collaborations with leading artists, fashion designers and musicians.