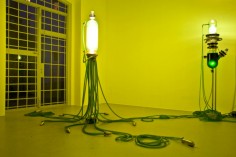 Thomas Feuerstein is a universalist. Born in 1968, he has received a doctorate in art history and philosophy, been a co-publisher of the journal Medien.Kunst.Passagen, won research grants for electronic art, published articles on art theory, biotechnology, and other subjects, and taken part in exhibitions since 1988. In 1995 he initiated his Biophily project, named for Erich Fromm`s concept of “biophilia,” the love of life, as opposed to “necrophilia” (love of death). In The Anatomy of Human Oestructiveness (1973) Fromm castigated a necrophiliac society narcissistically in love with everything nonliving and machinelike. Though adopting Fromm`s terminology, however, Feuerstein de-emphasizes its binary structure. His real interest is in processes of transformation and transition, the mixing of life and technology. Biophily, Feuerstein writes, “is dedicated to researching an inverse understanding of nature and mirrored images of humankind, and describes those obsessions of techno-culture that hypertrophy the love of life, perverting it.”

Between 1995 and 1999, Feuerstein traveled to five locations he chose as “reference points on the symbolic map of Biophily”: Dar es Salaam, Tanzania; Windhoek, Namibia; Los Angeles; Bombay; and Bishkek, Kyrgyzstan. Each city stands for a particular interest: Dar es Salaam, for instance, represents the idea of nature as a bio-resource or gene library, while Windhoek became the scene of a “bio-romantic” quest for an ancient plant that has existed for more than seventy million years and survived the transformation of an ancient rain forest into a desert. In Los Angeles, Feuerstein archived his sperm at the California Cryobank. These places and the themes Feuerstein associates with them-hinges and points of interaction between history and the present, between biology, technology, and mythology-were the subjects of the works exhibited here inside a large lifeboat. Bringing together seemingly numberless objects and images and accompanied by an exhaustive catalogue, the project was comprehensively condensed into a kind of microcosm.

A second focus of the exhibition was a gigantic crystal chandelier. Like the lifeboat, the chandelier is an extremely condensed form of the most varied connections among distinct parts. Hanging so low that its bottom lay on the floor, the fixture resembled a giant jellyfish. Feuerstein named it Leviathan, 1003, characterizing it as a “state jellyfish,” a “metaphor for a social metaorganism.” Made of more than ten thousand crystals, each shining in the reflection of its neighbor, it is a vast structure whose overall effect emerges only from the relationship among its parts. In the double image of the jellyfish swimming in the ocean and the chandelier floating in the air, along with the entire historical significance of the Leviathan, does the “social weightlessness” of which the artist speaks with regard to this work signify a poetic wish-or a model?

Diverse themes that Feuerstein has pursued for years, such as biopolitics and social theory, came together here. he has developed a complex world model, neither closed, systematic in structure, nor scientifically rigorous, but rather artistic-and stunning by virtue of the number and variety of the threads it ties together, as well as convincing in its visual form. Feuerstein`s works don`t symbolize a theory that is supposed to be carried out. Rather, they offer different possibilities of approach, like the image of the tent and the chandelier, leading into realms of thought filled with questions about the future of humankind in the context of genetics and technology, of subjective experience and social tasks. The human being becomes a weightless subject in a sea of associations.
.
.
.
.
.
.
.
source: innsbruckswarovski

Thomas Feuerstein, born in Innsbruck in 1968, studied art history and philosophy, and since 1997 has held various professorships and positions as a guest professor at institutions such as the University of Innsbruck, the Mozartheum in Salzburg, and the University of Applied Arts Vienna. He is a multimedia-based artist, and his work comprises installations, drawings, objects, sculptures, photographs, Internet art, and much more. In terms of content, they are dedicated to the contradictory space between art and science, between fact and fiction, and between individuality and community.

The artworks are displayed in individual and group exhibitions at international art institutions around the world. His sculpture “Leviathan” can be seen at Swarovski Crystal Worlds.
.
.
.
.
.
.
.
source: argekunstit