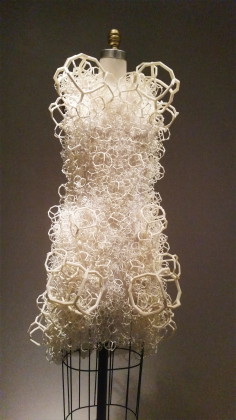 source: materialise
New York-based trio Gabi Asfour, Angela Donhauser and Adi Gil form the fashion collective threeASFOUR, which creatively explores the intersection between fashion, sculpture and mysticism through their creations. The Bahai dress was 3D printed in collaboration with Bradley Rothenberg for the “MER KA BA” collection, which finds its inspiration in the sacred geometry and tile patterns found in religious buildings across the world.
.
.
.
.
.
.
.
source: additivefashion
3D printing has already developed a close relationship with Haute Couture fashion though the works of Iris van Herpen as well as a number of other designers. This September one of the most respected avant garde clothing labels, threeASFOUR, presented 2 new 3D printed dresses during the New York Fashion Week. The 3D Printed Dresses by threeASFOUR are unlike anything we have seen so far in 3D printed fashion. Part of the spring summer 2014 collection titled “MER KA BA”, the dresses were created by Gabi Asfour, Angela Donhauser, and Adi Gil, the designers behind threeASFOUR, in collaboration with architect Bradley Rothenberg, who used the software Rhino to 3D model the designs. Belgian company Materialise 3D printed the dresses using SLS.

According to the designers, “The collection is inspired by tiling patterns found across religious structures all over the world. The black and white palette serves to draw singular focus to the sacred geometry adorning the overlaid textiles. Through modern technologies such as 3D printing and laser cutting, threeASFOUR translates ancient symbolism to a new living form, and promotes a message of their timeless desire for cross-cultural unity.

Gabi Asfour grew up in the Lebanese civil war; everyone was fighting with everyone. Adi Gil’s grandparents were survivors of the Holocaust and she grew up in Germany, which was a shock. Angela Donhauser is Russian and German and was born in Tajikistan. The three of us come from places where people have been at war with each other and we don’t believe in that.”

The ten piece collection includes clothing produced with traditional fashion techniques as well as laser cutting in addition to the 2 dresses created with the use of 3D printing. This is most certainly the larges step we have seen in the development of 3D-printed textiles up to date, with an airy and flexible design that results in a lighter, much more wearable garment. 3D Printed Dresses by threeASFOUR are stunning, beautiful, and most certainly are a leap in the 3D printing fashion field. Both of the dresses move well on the catwalk, and seem to be as comfortable to wear as the other, more traditionally designed, pieces.
.
.
.
.
.
.
.
source: threeasfour
threeASFOUR is a trio of transnational artists based in New York City who use fashion as their primary artistic medium.

Founded in 2005 by the designers Gabriel Asfour, Angela Donhauser, and Adi Gil, the collective has built a legacy of fusing cutting-edge technology with traditional craftsmanship to create clothing at the intersection of fashion, sculpture, and mysticism. Recipients of the Cooper-Hewitt/Smithmonian Museum’s 2015 National Design Award, threeASFOUR has collaborated with numerous artists and musicians, including Björk, Yoko Ono, and Matthew Barney.

Their experimental designs are in the permanent collections of the Victoria and Albert Museum in London, the Costume Institute of the Metropolitan Museum of Art, and the Musée de la Mode et du Costume in Paris. Their work has been the subject of multimedia exhibitions at the Jewish Museum in New York (2013) and the Mint Museum in North Carolina (2014). They have collaborated with Kate Spade (2005) and Gap (2007).

Drawing their core aesthetic from the universal languages of sacred geometry, threeASFOUR is devoted to the creative exploration of themes of consciousness and cultural coexistence.