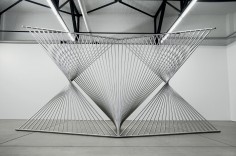 Berlin-based artist Timo Nasseri explores language – be it mathematical, Farsi or, indeed, military – in his drawings and installation work. Starting out as a commercial photographer, Nasseri began making art works with a series of photographs and tactile sculptures of war machines that investigated both the insidious poetics of military nomenclature and the seductive packaging of weapons. Since then, he has taken inspiration from ostensibly diverse subjects as geometry, mathematics, and Islamic ornamentation in drawings and sculptures that underline their interconnectedness in terms of repetition and aesthetics.
.
.
.
.
.
.
source: mutualart

Timo Nasseri was born in Berlin in 1972 to a German mother and an Iranian father. He began his artistic career as a photographer, and in 2004 he made the transition to creating sculpture.

Combining Islamic and western cultural heritages, his work is inspired as much by specific memories and religious references as by universal archetypes described by mathematics and language, and the inner truths of form and rhythm.

He has held several solo exhibitions which include Ghazal, Sfeir-Semler, Hamburg (2009); He has also participated in the following group exhibitions: Taaffe-Streuli-Nasseri, Sfeir-Semler, Beirut (2010); Nasseri/Englund, Schleicher+Lange, Paris (2010). He was awarded the Prix Saar Ferngas Förderpreis Junge Kunst in 2006, and the Abraaj Capital Art Prize (UAE) [2011]
.
.
.
.
.
.
.
source: maharam

Timo Nasseri (b. 1972, Germany) is a Berlin-based artist of German and Iranian descent. He began his career as a commercial photographer, mainly shooting fashion and advertising campaigns. Finding the disposable nature of the work unfulfilling, he turned to documentary projects for international aid agencies and nongovernmental organizations. The Second Persian Gulf War prompted a shift to fine art as he began making work that examined the nomenclature of American military aircraft, which borrowed the names of Native American tribes like “Apache” or “Comanche,” and the parallel Iranian practice of equating missiles with celestial phenomenon through labels like “fadjir” (Persian for “first light of day”) or “shahab” (“falling star”). More recent bodies of work center on the connection between the universal language of mathematics and aesthetics found in Islamic architecture. After encountering muqarnas, a decorative element typically found at mosque entrances, Nasseri initiated a series of drawings using only a ruler, compass, and white ink on black-pigmented paper. Featuring a system of triangles that can be endlessly combined, these precise drawings later took on the form of polished stainless steel sculptures in the 2009–13 series Epistrophy/Muqarnas. Having just exhibited his work with Sfeir-Semler Gallery at Frieze London 2013, Nasseri created a new drawing called One and One for Maharam Digital Projects.