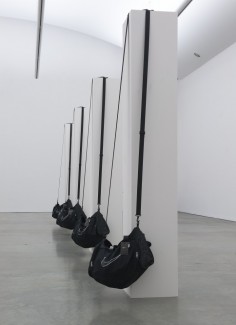 Berlin-based multimedia artist Timur Si-Qin explores the universality of aesthetic motifs in advertisements and popular culture. His fascination with the causal chain of events that goes into contemporary image culture sees Si-Qin utilise commercial products (often linked to preoccupations with health, vitality or luxury) like Axe body wash, Yoga mats, stock photography and promotional display structures. He presents these objects like biological relics in an effort to interrogate the broad question of why visual conventions reoccur so persistently. He finds answers in a range of factors – from human physiology to evolution- rejecting the separation between culture and biology and celebrating their convergent lineage. For his series “Axe Effect”, Si-Qin impaled Axe-branded men’s shower-gel bottles on medieval swords, causing them to bleed neon fluids in an apparent metaphor of the “violent and erotic inter-penetration of the arms race and the mating call in the guise of product placement” – his work asserts that if one can understand the tendencies of a material, one can use that knowledge to activate the item’s capacities, in the hope that a greater understanding of the materiality of culture may lead us toward unlocking its unrealized capacities.
Timur Si-Qin, born 1984, is a Berlin-based artist of German and Mongolian-Chinese descent and a graduate of the University of Arizona (MFAO. Selected solo exhibitions include Basin of Attraction at Bonner Kunstverein in Bonn (2013), Infinite Surrender, Focused Control at Société in Berlin (2013) and Legend at Fluxia in Milan (2011). Selected group shows include The Great Acceleration at the Taipei Biennial (2014), Metarave I “It’s only a fantasty” at Wallriss Artspace in Freiburg (2014), Ökonomie der Aufmerksamkeit at Kunsthalle Wien (2014), Art Post-Internet at the Ullens Center for Contemporary Art in Beijing (2014), Speculations on Anonymous Materials at Fridericianum in Kassel (2013), A Material World at PSM in Berlin (2012) and Performance Anxiety at Stadium in New York (2011).
.
.
.
.
.
.
.
source: frieze-magazinde

Situating Timur Si-Qin’s work within a critical taxonomy is not easy. His oeuvre seems to be influenced by the Internet – not as a technology but as a matter of course. The term Net Art hardly captures his medium, although he did set up the online virtual Chrystal Gallery in 2010 to exhibit art works by other artists in what appeared to be a classic white cube. Although Si-Qin grew up with the Internet, one can’t help wondering if he is making works that defy categorization, despite their dependence on new media technology – a quality he shares with other artists whose biographies alone give them the digital native’s experience of the Internet, from Oliver Laric to Daniel Keller and Nik Kosmas of AIDS-3D.

In interviews, Si-Qin speaks in abstract terms about the theories behind his practice, claiming that his oeuvre deals with cognitive patterns, with the thresholds, breaks and continuities between intuition and instinct, art and nature, technology and poetry and even the interplays between system and individual, between medium, mimesis, morphology and ontology. Yet the works themselves possess a discrete and captivating clarity. In his ‘Custom Interior’ show (2011) at Berlin’s Mark & Kyoko project space, ergonomic leather upholstery and office chairs appeared as the dying gasp of a long outdated prosthesis theory à la Marshall McLuhan. Whereas technical media once stretched beyond us into the future, today computer-aided design software can calculate our physical interconnections with any object to create an artificial leather, dust-repellent, buttock-and spine-friendly continuum between humankind, technology and work. These ergonomic options are explored in a sleek pamphlet Custom Interior (2011), which looks like a cross between an advert for trainers, a luxury car and a gaming console. In Axe Effect _(2011), plastic bottles of the Axe brand of shower gel are impaled by Samurai and knight’s swords or mounted on the wall like hunting trophies, slowly bleeding to death in a lurid, thanato-erotic display as the gel dripping down the wall creates random combinations of shapes and colours. In an accompanying text, Si-Qin writes about ‘the contingent epic of evolution […], the arms race [and] product placement (as an evolutionary process in itself)’ – as if advertising were a kind of _logos spermatikos.

The installation MAINSTREAM (2011) – created for the eponymous show at Société Berlin – was equally simple and effective. The artist printed out 33 posters for Michael Bay’s sci-fi action film Transformers (2007) and hung them in cheap metal frames, only to press leaves from ferns and other plants between the poster and the frame’s glass. The pressed leaves look like so many specimens in a natural history museum while blending ornamentally with the pictures of the Transformer robots behind them. The posters – shown in two rooms – followed the good versus evil divide prominent in the film: The good Autobots are characterized by clear industrial designs based on American cars of the postwar boom years and appear more ‘human’ than the evil Decepticons, which look like insects, in tones of earth and stone, crudely appealing to feelings of revulsion and fear. Other battles emerged in his ‘Legend’ show at Milan’s Galerie Fluxia in 2011. Si-Qin asked the two women gallerists to blast holes in replicas of knight’s armour – chain-mail coat, breastplates, helmets and gloves – with a range of firearms, from Glocks to Kalashnikovs. In the gallery, two flat-screen monitors showed video footage of the ballistic performance while the injured armour hung from plasma-TV suspensions on the wall and on standard clothes-racks. Although The Cramps’s single ‘Bikini Girls With Machine Guns’ (1990) may come to mind, the many-layered quality of Si-Qin’s works keeps the associations flowing: from discourses on war, gender and evolutionary concepts to the turbocharged, neo-materialist, morphogenetic theories developed by Manuel De Landa or Brian Boyd, whom the artist cites as key philosophical points of reference. In addition to writing essays, Si-Qin pens texts to accompany most of his works; neither manifestos, nor artist statements, these texts seem to act as appendages expanding his own thinking. ‘Maybe an art work is also an organism, sending and navigating its environment, responding to the call of its exterior,’ he writes in Custom Interior. Whatever the call, the response appears as a curious hybrid of nature, culture and media technology.