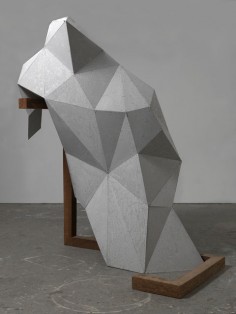 Toby Ziegler arrived at his distinctive process of art-making following his graduation from art school as a way of dealing with the disillusionment he felt about being an artist. Using 3-D modeling software, Ziegler takes found images (Flemish Old Master paintings, John Constable’s clouds, 16th-century pornography) and translates them into pixels. Then, he works over Inkjet prints of the results by hand with paint or correction fluid, or, more recently, renders them in oil on canvas or aluminum panels. Ziegler’s sculptures likewise begin from flat source images redrawn as 3-D models. In The Alienation of Objects (2010), Ziegler used grainy photos of the Iberian head Pablo Picasso famously stole from the Louvre and chiseled away at to remake the sculpture in a Cubist redo, part two. Ziegler has also turned Victorian England’s kitsch Staffordshire pottery dogs into towering geometric forms of cardboard and gesso.
.
.
.
.
.
.
.
.
source: britishcounciljp

Encompassing painting and sculpture, Zeigler’s practice takes its starting point from the digital. His works often begin as computer-constructed images, which are then painstakingly transformed by hand onto canvas or into three-dimensional forms. The geometric aesthetic contrasts with the organic subject matter of landscapes, skies and animals; the use of computer programming speaks to a contemporary condition of understanding and interacting with the world through technology. Our acquaintance with nature and history often takes place at a distance, with film, photographic and virtual encounters replacing real experience; the surroundings that we understand best are much less exotic than we might hope.

Ziegler is also interested in the displacement of iconography throughout history. His geometric vistas act like a void in which objects are divorced from their historical or social context and time appears to be out of joint. In the series Equivalents for Megaliths (2004–05) Zeigler sketches out views of totemic forms amid a limitless landscape. Rather than connoting conventionally heroic or spiritual dimensions, the monoliths resemble teacups and other domestic forms. Perhaps we are looking at a futuristic space in which the commonplace objects of everyday life have become worthy of worship and the building of monuments.