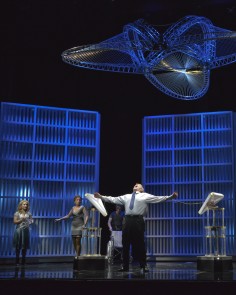 Science fiction and poignant family drama combine in one of the most stunning, cutting-edge operas of the 21st century, with a libretto by former Poet Laureate Robert Pinsky, coming to the stage of the Winspear Opera House in a production directed by Diane Paulus, designed by Alex McDowell (Steven Spielberg’s Minority Report) and conducted by Nicole Paiement (TDO’s The Lighthouse).

This visually spectacular robot pageant by MIT Media Lab’s Tod Machover tells the story of a terminally ill billionaire, sung by Robert Orth, who downloads his consciousness into “the System” and proceeds to use all his powers to persuade his loved ones to join him there. Without bodies, without the possibility of touch, sex, suffering, and death — are we still genuinely human?

Explore these existential questions and much more in a piece Variety described as “playful, lyrical and…mesmerizing.” Also starring Joélle Harvey as Miranda, Patricia Risley as Evvy, and Hal Cazalet in his Dallas Opera debut as Nicholas.

The Joy and Ronald Mankoff Pre-Opera Talks for Carmen will be given by Michael Heaston one hour before each performance in Hamon Hall at the Winspear Opera House.

Darkness. Robots roll, lurch, and glide onstage as a group and then disassemble into separate units. Four robots emerge from the pack and begin to speak. In their dialogue, each robot tries to understand the meaning of the word “death,” a strange concept they encounter in a drama left behind by their human creators. At the end of the prologue, still puzzled by the idea of death, the robots proceed to follow the human creators’ command to perform the ritual drama. The robot leader announces: “Now it is time we started.”

Each robot now begins a complete transformation into its human character. There is a download of information including fragments of personality and memories. One by one, the human characters emerge from the robots, ready to enact the drama: Simon Powers—a billionaire entrepreneur obsessed with his death. Mid-sixties. Mad, eccentric, charismatic, virile, successful. Has a devilish side to him, mischievous. Miranda—Simon’s daughter. Late teens. The daughter of a previous marriage. Special, prescient. Antigone, Cordelia. Nicholas—Simon’s protégé. Grad student age: twenties. When a child, rescued by Simon from ward for severely disabled children. Now moves like an agile machine. Evvy—Simon’s third wife, her first marriage. Thirties. Glamorous, sexy, but wary.

Scene 1: Simon and The System

In the home of Simon Powers, the final preparations are being made for Simon’s total immersion into The System. This technology will allow him to control the physical environment after his death, meaning that he will be able to forever be in touch with his loved ones, manipulate his businesses, and propagate his legacy. Simon is excited, giddy, like a child. Miranda is afraid. Evvy is trying to be practical, trying to stay calm, indulgent of her husband’s behavior in spite of her own anxieties. Nicholas is serious, sweating, focused on his work, his eye on the clock. As the time approaches for Simon to enter The System, they all chant: “The matter is mortal, The System lives on.” Simon quotes poetry by William Butler Yeats (“Once out of nature”) and May Swenson (“Body my house my horse my hound, What will I do when you are fallen”), and then gleefully declares that The System will allow him to be more immortal than mere poets. Simon finally enters The System, saying to the others: “See you later!” Evvy wonders “What now?”, and they are plunged into darkness.

Simon gradually transmogrifies into The System. The physical environment subtly takes on many of Simon’s characteristics, moving and vibrating as if he were alive. Simon’s voice is heard in short phrases and fragments (“Remember. No matter the matter—I did that.”) that capture the essence of his life’s memories, feelings and experiences. By the end of this scene, there is no trace left of Simon’s human body. His voice is heard asserting over and over: “I am the same.”

Scene 3: Getting to Know You

Time has passed. The System is humming—in quiet mode—resting. Miranda and Nicholas are in the room, as the walls continue to stir mysteriously, enticingly. It becomes an animated environment, expressive of Simon’s physical presence. Nicholas assures Miranda that it truly is Simon in The System. Nicholas displays his own mechanical arm and explains to Miranda that the new technology is “Like my left arm that is mine, not me.” Nicholas and Miranda can hear Simon’s voice, and they discover that Simon has the ability to interact with them. Simon announces that although he is now in The System, he still has all his previous powers: “And I have billions of bucks. And I can still sign checks.”

It is the middle of the night. Evvy enters in a daze, as in a dream, sleepwalking. Simon now inhabits The Chandelier, which vibrates with delicate music. They share a memory. Evvy asks, “Simon, do you remember the first time we danced?” and vivid sensory details of the experience come flooding back to them both. Simon assures Evvy that his appetite for life is endless and that he will always desire more, as Evvy strokes the Chandelier and conjures new sounds to envelope Simon’s voice. She calls out to Simon, “Touch me,” as Simon’s voice in The Chandelier endlessly repeats “More.” From a memory of love in the past comes a renewal of erotic passion, melding Evvy’s physicality with Simon’s new form.

Scene 5: Nicholas and the Robots

Nicholas is in his lab, inhabited by the robots he has been building as part of The System. The robots start moving to the music emanating from the walls, then come to life and start dancing with Nicholas. Miranda is archiving and exploring The System, and is also reflecting on life outside the family compound and The System: “How are we linked to all the rest of the earth?” Nicholas tells Miranda the story of how Simon came and rescued him from a children’s ward when he was a young boy and gave him a new life. Nicolas swears he will repay the favor: “Now I’ll help him live in The System. Without a body, post-organic like me.”

A new, stranger atmosphere: Miranda, Nicholas, and Evvy are apparently accustomed to it. Evvy is now wearing headphones, swaying a little as if to music, nodding and tilting her head as though channeling Simon’s presence. A delegation from the outside world—composed of The United Way, The United Nations, and The Administration—arrives and wishes to speak with Simon. The whole world has been plunged into a state of war and famine ever since Simon entered The System. When Miranda brings in the delegation, they implore: “What is the meaning of your behavior? We demand an answer!” Simon refuses to answer them and instead quotes a passage of German poetry (“O Röschen rot! … Man lies in deepest need. Man lies in deepest pain. Yes, I would rather be in Heaven”). This only further confuses the delegates. After Nicholas reads a strange report from one of Simon’s newspapers (“Group of Young Men Beat Nurse to Death”), the delegation is finally sent away. Left alone, Miranda reflects on her own feelings of isolation now that her father has entered The System: “I miss having a father like any other person.”

Scene 7: Into The System

Everything—the walls, The Chandelier, the robots—is working together. Simon seems to be everywhere, inhabiting them all, omnipotent. Evvy finally removes the headphones and tells Nicholas and Miranda that she has been channeling Simon: “I’ve been listening to Simon. It’s like when we fell in love … You can jump. You can fall forever, and do it again.” Now it is Evvy and Nicholas who are transformed, as they too are absorbed into The System. Only Miranda is left to face the outside world.

Miranda is surrounded by a parade of the world’s Miseries: the victims of famine, torture, crime, and disease. In the wake of the Miseries, the figure of Simon, in some version or simulacrum of his human body, emerges from the shadows. Miranda and Simon have a final confrontation, in which Simon explains why he chose to live in The System: “Now there’s no help but evolving, out of the meat and into The System. It isn’t the many and the few—it’s yourself, it’s you!” He beckons to Miranda: “Come into the world of light.” Miranda is unsure whether she should follow Simon into The System. She has lingering doubts: “The body of this death is who I am, it is my mind … Who will I be? And what will I see when my body is gone?” Simon enters back into The System. Miranda hesitates. She turns towards the audience, repeating a soaring high note as sound swirls around her: “Who? What? When? How? Light. Death. Alone. Alive. Live.” Light grows to a blinding level. Music emanates in all directions from Miranda’s voice, filling the space and extending well beyond.

The System dematerializes into a Matrix of Light. The robots reform into a regular grid and begin to light. The robots discuss the drama they have enacted, but they are left with unanswered questions about the meaning of death. The robot leader assures the others: “Questions are excellent.” The chorus of robots concludes: “Now is the time for the ordained ritual to come to rest.” After a few flickers and pulsations of sound and shadow, all gently fades away.

Actively promoting a unique, antidisciplinary culture, the MIT Media Lab goes beyond known boundaries and disciplines, encouraging the most unconventional mixing and matching of seemingly disparate research areas. It creates disruptive technologies that happen at the edges, pioneering such areas as wearable computing, tangible interfaces, and affective computing. Today, faculty members, research staff, and students at the Lab work in more than 25 research groups on more than 350 projects that range from digital approaches for treating neurological disorders, to a stackable, electric car for sustainable cities, to advanced imaging technologies that can “see around a corner.” The Lab is committed to looking beyond the obvious to ask the questions not yet asked–questions whose answers could radically improve the way people live, learn, express themselves, work, and play.
.
.
.
.
.
.
.
source: operamediamitedu

Death and the Powers is a new opera by composer Tod Machover and developed at the MIT Media Lab. It is a one-act, full-evening work that tells the story of Simon Powers, a successful and powerful businessman and inventor, reaching the end of his life and facing the question of his legacy. He is now conducting his final experiment, passing from one form of existence to another in an effort to project himself into the future. Simon Powers is himself now a System. His family, friends, and associates must decide what this means, whether or not he is actually alive, how it affects them, and whether to follow.
.
.
.
.
.
.
.
source: webmediamitedu
Or touch sound? Or to have sound touch you so deeply that it can change your mind, your body, your life?

Tod Machover certainly thinks so, and his work over the past 30 years demonstrates an extraordinary range and diversity that enhances our definition of music itself and our conception of what it can achieve. Called “America’s Most Wired Composer” by The Los Angeles Times, Machover is widely recognized as one of the most significant and innovative composers of his generation, and is also celebrated for inventing new technologies for music, including Hypersinstruments which he launched at the MIT Media Lab in 1986.