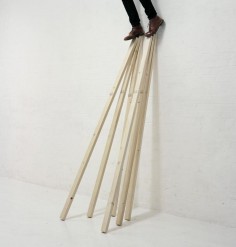 Tom Lovelace works across photography, sculpture and performance, where concept prevails over form and his methodology is one of deconstructing conventions of a conceptual understanding of ‘discipline’. Primarily using the industrial landscape as his sourcing ground, he seeks to manufacture an ephemeral subject, creating environments and interventions that exist solely for the camera.

Tom Lovelace (b.1982, United Kingdom) is an award winning artist living and working in London. He studied Photography and Art History at the Bournemouth Arts Institute and Goldsmiths College, London. Recent solo exhibitions include [Gouge] (Galleri Image, Denmark, 2011) and Work Starts Here (Son Gallery, London, 2012). Recent and upcoming group exhibitions include ProjectB Gallery (Milan, 2012), Flowers Gallery (London, 2012), and Rare Gallery (New York, 2012). His work has been selected for the Terry O’Neill Award and featured in the book, New Danish Art 11. Lovelace received the Surface Gallery Prize in 2008 and the prestigious Rhubarb Rhubarb Bursary in 2010. Most recently he was awarded an Anna Mahler Residency in Spoleto, Italy, where he will engage with the legacies of David Smith, Sol Lewitt and Italian masters such as Giotto.
.
.
.
.
.
.
.
source: tomlovelacecouk

The work of Tom Lovelace encourages wanderings across decades, re-considering the photograph as document or art (Fox Talbot), the photographic document as art or anti-art (Breton, Bataille, Brecht), and the endless permutations that are part of Conceptual Art and its legacy.
David Evans

Tom Lovelace’s work explores the boundaries of representation. Pursuing the questions prompted by his vehement style of photography, he orchestrates spatial and sculptural installations through extensive survey and experiments into the conceptual boundaries of photography. Lovelace suggestively fabricates temporary structures for the purpose of superseding the site of their execution or documentation as photograph. The object and the photograph reveal the tangible materiality of sculpture and the optical truth of photography, and by moving between these disciplines Lovelace forges his inherent style.
Sheyi Bankale

Lovelace has previously exhibited at the Royal West of England Academy, ICA London, Oriel Davies Gallery and the Victoria and Albert Museum. In 2009 Lovelace received a Rhubarb Rhubarb Bursary with related exhibitions at Rhubarb East, Birmingham and Flowers Gallery, London. In 2012 Lovelace was awarded an Anna Mahler Residency in Spoleto, Italy, where he continues to research the history of the photogram and the concept of the readymade. Most recently he took residence in Aarhus, Denmark as part of the forthcoming European Capital of Culture Programme with a related exhibition and book forthcoming in 2017.