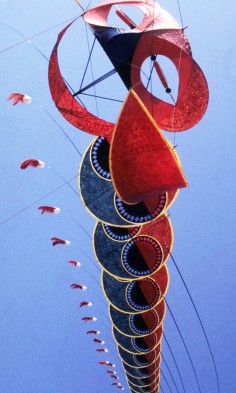 Sculptor Tom Van Sant went to go fly a kite the other day. It was a windy day, and he had a big kite — an 800-foot-long kite, to be specific.
Van Sant calls this particular kite Jacob’s Ladder, after the Bible story about patriarch Jacob falling asleep and dreaming of a great ladder to Heaven, with angels walking up and down it.
But the kite looks more like a giant centipede with googly eyes painted on a round head, large round discs for a body and poky metal rods for legs. Van Sant built it by hand 37 years ago during a brief but glorious aerial blip in his otherwise land-based career.
Conceivably, a person could climb the Ladder’s rungs a quarter-mile up into the sky. “It can be done,” Van Sant insists, though no one has been dumb or daring enough to try.
Although Van Sant is not a professional kite maker, he is recognized as the grandfather of modern kite making. Before him, kites were made with paper and wood. He was the first to use Fiberglas tubing and nylon fabric. This was in the early ’70s, when Fiberglas had just come to market and people were using it to make cable guidelines for radio beacon towers.
Steel cable rusts, but Fiberglas doesn’t. It’s also quite flexible. Van Sant shaped the Fiberglas tube into a rounded frame, onto which he sewed the fabric as if he were making a trampoline. Jacob’s Ladder is basically a series of hundreds of little trampolines hooked together.
And if your basic kite is a single segment, Van Sant realized, you could string together as many segments as you pleased. He hooked 200 of them together on a three-wire system. Collectively, they operate like Venetian blinds, except they are self-adjusting, which means that in a wind, the kite picks the angle that is most efficient.
Van Sant is quite proud of this efficiency. “I’m a frustrated engineer maybe,” he says with a shrug.
The Ladder had not been out of storage since 1975, and he’s eager to see it fly.

While the kite is big, the wind is bigger. It blasts the Santa Monica Beach sand onto people’s legs and camera lenses and whips women’s hair into interesting sculptures.
Van Sant and his friends retreat into the lobby of the nearby Casa del Mar hotel, where more of his kites are pinned to the walls like giant abstract butterflies.
“We could make a little seat and you could go up into the sky,” Van Sant says to a little girl standing beneath one. “Would you like that?”
The girl frowns and peers dubiously at the kite, which seems to peer back at her.
Van Sant’s entire kite oeuvre originates from a two-year period beginning in 1974. Jacob’s Ladder is one of a handful of large “flying sculptures” he made during that time.
He was in his early 40s then, plugging away at a sculptural mural in Taipei, a commission titled “The History of Flight” for the Civil Aeronautics Administration Building.
Upon learning that the Chinese had been making kites for thousands of years, Van Sant wondered if anyone around was versed in the traditional techniques. The aeronautics people told him about an old man who lived by a river and still made kites the old-fashioned way, with bamboo and silk.

Van Sant went to the river. Now 82, he can’t recall the man’s first name or even what river he lived on, only that Mr. Wong made kites with great care and great beauty. Deeply impressed, Van Sant decided he’d like to make kites, too.
“When you’re a painter or a sculptor, you’re always thinking about whether something looks better this way or that way,” he explains. “I got tired of making judgments about art. The question with a kite is, will the damn thing fly?”
Van Sant admires how well his kites fly. When he speaks about them, he emphasizes their construction. (The cheerful feathers at the tips of Jacob’s Ladder’s metal rods aren’t merely decorative. They create drag and contribute to the kite’s overall stability.)
On a deeper level, kites appeal to him because he abhors “being a grown-up.”
Still, he hasn’t made a kite since those two years back in the ’70s. He can’t quite say why he stopped making them, only that he went back to his regular routine of building public sculptures.
But though Van Sant’s kite days were brief, they had a lasting effect.
Otis College of Art and Design recently held a kite festival featuring Van Sant’s work. The festival was Van Sant’s idea. The college had asked him to teach a kite-making class, and he agreed on condition that it hold a festival.

To verify Van Sant’s credentials in the kite scene, organizers called up the best kite makers in the country, one of whom is George Peters.
When they got him on the phone, Peters took them back to a sunny afternoon in 1976. Then a young watercolor painter in Honolulu, Peters happened to see Van Sant flying his fantastical, huge kites at the beach. Mesmerized, Peters decided right then and there that he would spend the rest of his life making kites.
Back in Santa Monica, Van Sant muses, “He never even introduced himself that day.”
Outside, the sun has begun to dip below the horizon. Jacob’s Ladder remains scrunched up accordion-style on the shore, unable to fly.
“These big kites work so well, they can destroy themselves if the wind is too strong,” Van Sant says. “It’s like a great sailing ship. You take the sail down in rough winds or it will break the mast.”
Most of the time, he went on, the problem isn’t getting them up. It’s getting them down.
Jacob’s Ladder can carry 2,000 pounds. It is so strong it can lift a man up into the air. It’s happened to Van Sant before: He’s had to yell to other people on the ground to grab his legs and hold him down. And that was after flying barely 300 feet of it.
He has never flown Jacob’s Ladder’s full 800 feet, “for the reason that I haven’t done a lot of things that are difficult or dangerous.”
“It’ll carry you off,” he says. “I don’t want to end up in San Bernardino.”
.
.
.
.
.
.
.
source: geosphere

Van Sant is a sculptor, painter, and conceptual artist. In thirty five years of professional work he has executed over sixty major sculpture and mural commissions for public spaces around the world. These include the international airports of Honolulu, Taipei and Los Angeles, the civic centers of Los Angeles, Newport Beach and Inglewood, and corporate centers in Taiwan, Manila, Salt Lake City, Dallas, Honolulu and San Francisco. Van Sant has had fifteen one-man exhibits in the United States, Europe and Australia. His art is represented in public and private collections throughout the world.

Tom’s spectacular kites, produced in the mid-1970s, remain astonishing. His trampoline train has fostered newer renditions, and his large centipede and Concorde delta were both larger-than-life. Tom is known to both the science and art communities, combining state of the art technology and media to create world famous sculptures of both large and small scale.
.
.
.
.
.
.
.
source: f508