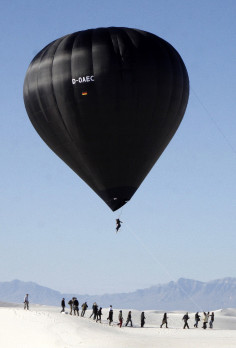 source: makeryinfo
In the desert of New Mexico, artist Tomás Saraceno realized the very first human flight in a zero carbon solar-powered hot air balloon. The Aerocene act critiques atmospheric pollution due to air and space transportation—and will be presented in Paris during COP21.

The first-ever recorded solar-powered hot air balloon took off on November 8, 2015 over the spectacular White Sands Desert, propelled by Studio Tomás Saraceno and curated by Rob La Frenais. For three hours without touching the ground, the balloon rose into the air without the usual burner, its black fabric heated by the sun and the infrared rays reflected by the white dunes.
.
.
.
.
.
.
.
source : nicolatriscottorg
Tomás Saraceno’s work is as conceptually rich as it is aesthetically captivating. His pursuit of a borderless existence in the sky unfolds in a bewitching succession of floating structures, transparent aerial habitations, and human-scale suspended webs. Saraceno’s artistic visions seek to defy the constraints – social, technological, political and cultural – that bind us to a ground-based, bordered, fossil-fuelled, restricted existence. And he underpins these visions with relentless research, technical experimentation and scientific collaborations.

Saraceno’s sculpture Aerocene last week had its pilot flight in the dramatic landscape White Sands desert, New Mexico, in an event organised by the Rubin Center for the Visual Arts in El Paso, curated by my former colleague Rob La Frenais with Tomas Saraceno Studio. This extraordinary flight marked the first milestone in a Saraceno’s new project the Aerocene, which takes forward his vision in the flights of aerosolar sculptures that are inflated by air, lifted by the heat of the sun alone, and transported by the wind.

The artist has been experimenting with solar balloons for some years, driven by his dream of habitations in space without polluting the atmosphere with black carbon. Black carbon particles (soot) are emitted by hydrocarbon-fueled rockets and a recent scientific study has indicated that, if the space transport industry grows significantly in coming years, this black carbon could contribute to global climate change. Emissions from 1,000 private rocket launches a year would persist high in the stratosphere, potentially greatly altering global atmospheric circulation and distributions of ozone and contributing to polar temperature rises and sea ice melt.

Saraceno’s siting his new launch in the New Mexico White Sands desert area – where the first rocket launches in the United States were made and where the first tourist spaceport in the world is located – is therefore particularly significant.

Prior to the launch, Saraceno put out a call for people to be part of a collaborative action to help the launch of his new solar balloon. The experimental flight was preceded by a conference ‘Space Without Rockets’ at the Rubin Center, organized to explore the vision, potential and contexts for the project.

On the morning of Sunday 8 November, around 25 people, including Saraceno’s team of engineers and balloonists, arrived well before dawn at the White Sands Missile Range entry point for security clearance by the US Army (having previously submitted our passport information), which controls a large part of the White Sands area.

We drove out in a convoy of cars across the desert, as twilight spread across the flat landscape. After an hour’s driving, with the sun coming up over the distant mountains, we arrived in the launch site in the heart of the white sand dunes.

Saraceno’s black solar balloon was stretched out across the white sand, partially inflated with air. It lay rather limply and lop-sided in the cool dawn air, awaiting the full power of the sun’s heat to emerge. Miraculously, despite an ominous weather forecast that had made some of us a little reluctant to get out of our warm El Paso hotel beds at 3am in the morning, the sky was clear and nor was there a breath of wind.

The Aerocene sculpture materializes more than ten years of research by Saraceno and his team on material properties, thermodynamics and atmospheric science. In principle, as the sun warms the air within the balloon, the air molecules becomes less dense than the outside air, causing the balloon to rise without the burning of propane or the use of lighter-than-air gases (helium or hydrogen).

The flight of this prototype balloon was planned as a tethered flight, always connected to the ground by ropes, as its venting and control had not been tested. The radical action was to lift a person off the ground by the power of the sun itself. In the early morning, the balloon looked as though it could barely lift itself, let alone a person. But, as the desert heat gathered force and the sun’s energy bounced back off the dazzling white sand into the balloon, adding to the heating effect, the balloon gathered strength. With Marija, an experienced balloonist from Croatia, suspended by a skydiver harness below the balloon, it lifted off the ground, controlled by the volunteers holding its ropes. A gentle breeze moved the balloon along the dunes and between them.

As the sun rose further, the balloon’s strength increased, lifting Marija higher. Danja from the Studio took Marija’s place and was allowed to rise to a height of perhaps 100 feet. The balloon strained against its tethers. Six people hung onto each rope to prevent the balloon taking off. Tomas was finally persuaded to take his place below the balloon, and a few others followed him, careful checks on the harness and attachments taking places each time. The balloon became a formidable beast striving to rush upwards to its home in the blue sky. More people joined the ropes to control it. After a few hours, the expert balloonists decided it had become too powerful to control and, after some less than successful testing of the venting, the balloon was gradually brought to the ground and emptied of its blisteringly hot air.

Saraceno’s fascination for structures in the sky stems from his family’s exile from Argentina (when the artist was a baby) because of the Perón dictatorship. When he returned there ten years later, he felt it was no longer his home, a place where he didn’t belong. Since then, he has travelled a lot and has become interested in challenging how the nations, divisions and borders we inhabit are created on Planet Earth.

His conceptual challenge of the territorialisation of the earth by a move into the sky seems particularly relevant at this time, Europe’s new border crisis, and appropriate for exploration in El Paso, situated on the tense border between Mexico and the USA. Saraceno’s is a utopian project, both in terms of finding a new way of existing borderless, and of reaching the skies and space without polluting them.

But another factor seems apparent in the Aerocene’s connection to a more elemental and human-centered mode of existence. Our severe control over our environment and the elements (as I realised shivering in the glacial air conditioned terminal of Houston airport looking out over a shimmering landscape on my connection to El Paso) has physical and environmental impacts, as detrimental to us, I suggest, as they are beneficial.

Suspended above the desert under a vast black solar balloon, I could feel the sun burning my face, the slight breeze moving me gently, the force of the balloon tugging upwards. I looked out over a white desert dazzling under a violently blue sky, and at the scraps of vegetation struggling in this landscape, and felt the immediacy of the possibility of flying up and off in whatever direction – and across whatever border – the elements might choose, should my colleagues on the ground let go of those two slight ropes. It was an intensely sensorial experience that left me feeling profoundly alive.

Tomás Saraceno’s artistic project Aerocene is a series of sculptures that will float in the longest 0-fossil fuel journey around the world, becoming buoyant only by the heat of the Sun and infrared radiation from the surface of Earth. For COP21 Paris, December 2015, Saraceno presents Aerocene in a sculptural installation at Grand Palais.
.
.
.
.
.
.
.
source: catalogodiseno

Saraceno’s research has a very precise goal, the creation of flying systems like platforms floating in the sky, formed by habitable cells suspended in the air, that can change shape and join together like clouds. This project, called Air-Port-City, is not a mere experimentation of technological possibilities but seeks to re-examine the freedom of travel between countries, in relation to geopolitical dynamics, making use only of international law and overcoming the political, social, cultural and military restrictions of contemporary society.

Over the years, this utopian vision of a life suspended in the sky has led Saraceno to create a series of experimental structures such as inflatable balloons or modular structures that can interact with natural energies. His research investigates the possibility of colonizing the sky, looking for possible devices for life among the clouds—in a transparent bubble, migrating among the clouds, according to winds and weather, utilizing solar energy.
In Saraceno’s work, different elements from different disciplines and thinking constantly blend; architecture, chemistry, art, biology and the study of new materials. In a meeting with Friedman in his famous house in Paris, Saraceno described his utopia in Domus (No. 936, May 2010): “I like to think of a house or a space that is so light that it can fly and move with the increase in internal temperature, which varies depending on the sun’s heat. The temperature defines the relationship that we create with the environment; those who live in it establish the altitude and the ability to move.” All aspects of his installations tell us about these cities: from structures to air balloons, from habitable cells to plants and habitable cobwebs. We are faced with the flying cities of science fiction. To describe these worlds, the Argentinean artist speaks of clouds that evaporate into the sky, of gaseous masses that change their state in relation to environmental conditions, habitable systems in a permanent state of transformation.
.
.
.
.
.
.
.
source: domuswebit

Tomás Saraceno looks to the sky and sees possibilities for rethinking how we live in relation to one another—for reshaping notions about nationality and property, and revising our ideas about the fixity of the built environment and the organization of cities. Air-Port-City, Saraceno’s ongoing project, envisions networks of habitable platforms that float in the air. The freedom of their airborne location allows for sections of living space to join together like clouds, creating aerial cities in constant physical transformation. As he explains, “Like continental drift at the beginning of the world, the new cities will search for their positions in the air in order to find their place in the universe . . . [this structure is] capable of imagining more elastic and dynamic border rules (political, geographical, etc.) for a new space/cyberspace.”