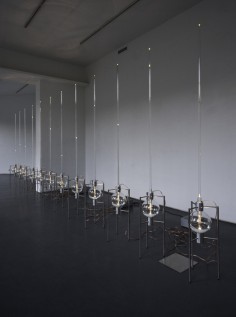 Twelve installation units formed a line across the exhibition space. Each unit consisted of a round-bottom flask in a stainles steel stand, with a vertical glass tube attached. Each flask was filled about a quarter-full with distilled water. When a resistance coil heated the air inside the flask, it expanded, forcing the water up into the glass tube. The level of the water rose when the air
was being heated and began to drop slowly as it cooled down.
The twelve units were divided into groups of three. In each group one water column went up while the other two came down more slowly. The four groups combined created a system working in random order.
Each stand had an in-built halogen lamp, which illuminated the flask and the water surface inside the glass tube. There was no other illumination in the exhibition space.
.
.
.
.
.
.
.
source: vimeo

Tommi Grönlund and Petteri Nisunen are two artists living and working in Finland.
Their kinetic installations have the appearance of aseptic scientific laboratories for chemistry and physics experiments.
.
.
.
.
.
.
.
source: estherschippercom

Selected solo exhibitions include: The 1st at the Moderna Museet, Stockholm (2004); Frequented Etherics, Spherics and Bars, at Kiasma, Helsinki (1998).

Tommi Grönlund and Petteri Nisunen live and work in Helsinki.