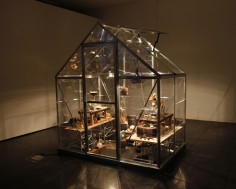 Mish Meijers and Tricky Walsh have been collaborating on The Collector Project for eight years, presenting different scenarios and series of works with each project. Through the use of their fictional character Henri Papin, the Collector Project pivots around concepts of memory, narrative, social constructions, psychology and its related manifestations: – internal and external architectures and machinery, both imagined and real.
.
.
.
.
.
.
.
source: art-almanac

Mish Meijers and Tricky Walsh have been collaborating on ‘The Collector Project’ for eight years, presenting different scenarios and a series of works with each project.

The project revolves around a fictional character, Henri Papin, through which the artists explore concepts of memory, narrative, social constructions, psychology and its related manifestations – internal and external architectures and machinery, both imagined and real.

Mish Meijers is a multi-disciplinary artist whose solo practice experiments in surface tensions: how one material conforms or abrades against the matter of another. Whether in actuality, or within conceptual content, she distorts the inherent worth and significance of her objects with regard to popular culture, gender determination and functionality, in an alchemic and at times discordant sensibility to construct her sculptural tableaux.

Apart from her solo practice Meijers maintains a rigorous collaborative practice that has seen her do several large scale one of projects as well as the The Holy Trinity collaboration, however she primarily collaborates with artist and partner Tricky Walsh for The Collector: Henri Papin now in its eighth year.

The Collector Project is an examination of psychological schema of their fictional and obsessive character (Henri Papin). The exhibition outcomes of this project manifest as immersive, large-scale sculptural installations encompassing various media and technology, and most recently, performance.
The Collector Project works thematically around the concepts of Memory, Reconstruction, Collection and Preservation, Narrative, Social constructions, Psychology and its related physiological manifestations, Architectures – external and internal, machinery – imagined and real.
In 2012 they were awarded a Qantas Foundation Art Encouragement award, were commissioned to make a new works for Monash University Museum of Art and Detached Cultural Organisation, and were included in the 2013 Mona Foma festival. The Collector project has been a recipient of Australia Council and Arts Tasmania funding, The Rosamund McCulloch studio award and has undertaken residencies in New York and Paris.

Meijers is a finalist in 2013 Hobart Art Prize, recently Meijers finished a permanent commission artwork for the Tasmanian Art Gallery and Museum with artist Tricky Walsh and has been the recipient of OZCO and Arts Tasmania funding. Meijers was a finalist in the 2012 Substation and Paul Guest prizes and in the 2010 Churchie award.

Other projects and ARI
Meijers + Walsh opened the Artist Run Initiative 6a in Hobart which operated from 2007- 2011 and initiated other collaborations within this structure including the major works Battery operated and supercharger (Nextwave festivals 2008 and 2010 respectively) and an Asia link collaborative residency with House Of Natural Fibre in Jogjakarta which resulted in a performance and installation piece at the Sangkring Art space. They have also exhibited in various locations nationally in the collaborative project installation/performance group The Holy Trinity. (CAST gallery – Hobart, Hell gallery – Melbourne, The Chrysalisseum – Melbourne, Boxcopy – Brisbane.)
.
.
.
.
.
.
.
source: eprintsutaseduau

Tricky Walsh builds circuits. Her installation practice is defined by interconnecting components that construct conceptual environments or in which she assembles deconstructive machines that illustrate a system of social and architectural orthopeadics. She also paints, makes comics and films.

The artists work together on the collaborative project the Collector, and are two thirds of The Holy Trinity – a collaborative installation/performance group with artist Alicia King. They are founding members of the artist run initiative Six_a.