The Sum of all Possibilities 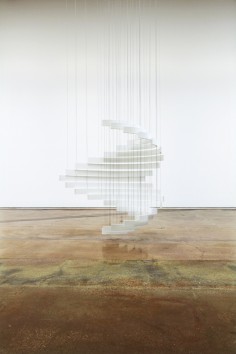 ‘The Sum of all Possibilities’ is characterized by an apparent infinite process of metamorphosis which is in reality a 12 minutes loop with a limited number of combinations, recalling the usual circular path of the viewer around the object.

By definition, a sculpture can’t be seen from each point of view simultaneously and can be grasped in its totality only through the act of moving around it. ‘The Sum of All Possibilities’ is thus a playful yet subversive commentary on the nature of the sculptural form, highlighting the close and paradoxical relationship between time and perception, movement and finitude, form and flux.
.
.
.
.
.
.
.
source: galeriaomr

Troika (Eva Rucki, b. 1976, Conny Freyer, b. 1976, both German, Sebastien Noel, b. 1977, French) are known for developing new vocabularies at the intersection of sculpture, architecture and contemporary installation. They met while studying at the Royal College of Art, London, and subsequently started working together in 2003, emerging as a practice that creates work collectively through observation, dialogue, research, ‘trial and error’, in turn, revealing the limits of rational thought as a wondrous and unique asset of the human mind to decipher our reality.

Troika has been featured in numerous group shows at institutions such as: the MoMA New York (2008), the Victoria & Albert Museum London (2009), The Art Institute of Chicago (2009), Tate Britain (2007), and their work is represented in the permanent collections of the Israel Museum Jerusalem, British Council, The Art Institute of Chicago, Victoria and Albert Museum and the Museum Of Modern Art New York.
.
.
.
.
.
.
.
.
source: studiotroika

Our studio adopted the term Troika for its symbol of teamwork — something we feel to be essential in the design and construction of architecture. The building profession brings together a remarkably varied group of individuals. When this diverse group works in concert with one another the possibilities are infinite and the project benefits are exceptional. Our studio strives to involve the client, engineers and contractors as active and contributing members of the project’s development and eventual success.

Since its inception, studioTROIKA’s focus has been providing our clients with the best design service possible. From the overall concept to the last detail, we approach each project, regardless of size, with a tremendous amount of energy, creativity and professionalism. studioTROIKA distinguishes itself by building thoughtful relationships with each client in order to create designs which reflect their personal and project goals.

studioTROIKA is both thankful and proud of the partnerships that we have developed over the past years with residential clients and commercial business owners and look forward to new relationships in the future.