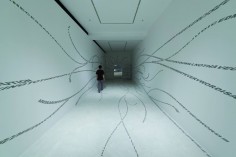 Work: “Ecce Homo” is a phase used by Pontius Pilate when presenting Jesus to the public before crucifixion, which also became the title of a book written by Nietzsche. By making reference to the last judgment of Jesus and Nietzsche’s philosophy, ‘Ecce Homo Trilogy’, a series of multi-channel video installations, tries to question the impartialness of a judgment, its existence and the powerlessness of the one being judged at a particular period of time and environment. At the same time, it attempts to depict the emotions of the one being judged and, the dense and tense atmosphere throughout the whole process. The documenting and broadcasting of the judgment and execution of the so-called dictators through the media and sharing platforms, allowing people in different parts of the world to become one of the witnesses and participators of the judgment unintentionally, just like those in the crowd who are told by Pilate to “behold the man (ecce homo)”.
Photographer: TSANG Kin-Wah
.
.
.
.
.
.
.
source: theculturetrip

A tall and thin figure always in a t-shirt and a pair of well-worn sneakers, Hong Kong artist Tsang Kin-wah is the kind of artist who is not yet preoccupied by his fame or over-pretentious but simply lets his art do the talking. Tsang made his career by creating art which blends foul language with beautiful and pleasing floral patterns that lingers in one’s head upon encountering it.
Born in 1976, Tsang Kin-wah graduated from the Department of Fine Arts of the Chinese University of Hong Kong, a major cradle where new generations of artists are nurtured to push Hong Kong Art onto the international map. Subsequently in 2002-2003, he moved to London and studied Book Art at the Camberwell College of Arts, this time proved pivotal to his artistic career. Despite being quiet, Tsang Kin-wah is a hard-thinker and is never too shy to articulate his ideas and emotions — including anger and fear, which he expresses through his art, simultaneously contesting the notion of morality in a minimal, precise and concise way. Take his work Untitled-Hong Kong (2003-2004) as an example, it is an installation which features words arranged in William Morris inspired floral pattern and painted in China blue. Upon looking closer, viewers are shocked by the vulgarity of these Chinese words and the slang embedded within, it shows the artist’s resentment towards materialism or maximalism which reigns in the city where he resides. The public loves Tsang’s work because it is dynamic and self-explanatory, he embraces the space with words that snake up on the wall and slither across the floor. Tsang broke into the international world with his word-art installation, his attentiveness in his art keeps him continually pushing boundaries, and he reinvents himself by expanding his questions in ‘what is art?’ a starting point for a more spiritual and philosophical series of work called the Seven Seals.

In 2009, Tsang Kin-wah started off the Seven Seals (2009-ongoing) series by projecting texts onto the walls and floor inside a white box. Taken from the Book of Revelation from the Bible, the Seven Seals series refers to the seven symbolic seals that secure a scroll in the vision of St. John the Apostle. When a seal is broken, a judgment is passed, and when all seven seals have been opened the Christ will return. According to the Book, the judgement comes in the form of apocalypse — warfare, terrorism, and natural disasters. Here, Tsang shares his sentiment towards Nietzsche and expands his interests in the notion of human morality and the external world. This is an urgent issue to the artist as a global citizen; to search for meaning in a difficult time.
The Fifth Seal – He Shall Deliver You Up To Be Afflicted And Killed As He Was (2011), shown at the Mori Art Museum is one part of the series. Walls in the gallery are enveloped with short phrases which appear as if a admonition:
‘the name, the call, the breath, the dead…the soul that sinneth, the body that sinneth, all souls are his, all souls are all his souls,…death shall be victorious, suffering shall be grateful, stand in faultful splendour, stand in sinful splendour,… immediately you will be reborn again, the courage to die for him, the courage not to live for the you, the stepping stone to the vengeance, the stepping stone to the completion, the duty of the devoted, the glory of the devoted, the sufficient sacrifice, and the glorious extinction, this is not the end, there is no end’. The animated texts increase its speed as the ambient sound — reminiscent of cries and pain — intensifies, then congests the entire room, on a continual loop. Immersed in an overwhelming storm of provocative texts, varying feelings swell up within each viewer, leaving them with an inalienable emotional impact.

If the Seven Seals is a critique of hegemony, Ecce Homo Trilogy I (2012) questions reality in politics in a more direct manner. This work uses footage taken from the 1989 trial and subsequent execution of Nicolae Ceausescu as the main subject matter, to investigate the moral complexity in response to a judgement, the deliberation of a legal sentence and the extent to which they disavow our dignity as human being. A breakthrough from his earlier installation, this work revolves from his signature text-based installation, but extends to paintings and four sets of projections of video footages, which are manipulated in a grainy yet painterly manner. The videos are namely the Prelude, Trial, Execution and Burial. If his earlier religious and spiritual work requires contemplation, the Ecce Homo Trilogy I offers a straightforward narration which provokes one’s self-consciousness. It is true that Tsang’s ambition is not alone in engaging viewers’ minds but as ‘witness’ we to seize this genuine painful bodily experience in order to negotiate with moral issues that one compasses.

The way in which Tsang’s work consistently address and questions pressing issues surrounding humanism is admirable. An early phase of the artist’s new attempt, Prelude in the Seven Bowls (2013) takes reference from the seven bowls of God’s wrath once again from the Book of Revelation. It is about plagues sent from God as the world approaches its end. A three-channel video and sound projection, the work uses footages of 311 earthquake-tsunami incidents in Japan in 2011 and creates a journey for viewers to experience natural disaster, highlighting the incapability, vulnerability, anxiety and fear of human beings when facing the real power of nature. It is never an easy task to maintain a consistent belief in the pursuit of such a serious and heavy subject matter. Whether all viewers share the same insight with Tsang Kin-wah, it is undeniable that there is a depth beneath the surface of his words, as language, as pattern, and an honest desire to push and to endorse art is not just something to reflect on, but is a necessary response to life.