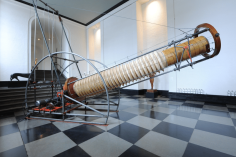 source: modernamuseetse
Since the 1980s, Ulf Rollof (b. 1961) has worked with a multitude of different materials and expressions—sculpture, works on paper, moving images, experimental painting, mechanical installations, and photography. The exhibition Urgent features some twenty works, ranging from his early watercolors to photographs, from large installations to his shooting paintings and the latest large lightbox paintings. Moderna Museet has a comprehensive collection of Rollof’s work, and the exhibition complements these with a number of important pieces on loan from private collectors and from the artist himself. Visitors will now get a chance to experience a rich and broad body of work by an artist whose work feels very relevant today.
Ulf Rollof creates his art in dialogue with what he is experiencing here and now. But although the point of departure is always the artist’s own experiences, the resulting works are never private; they touch on the universally human with great force. Rollof’s work deals in various ways with boundaries—boundaries between the organic and the artificial, and between the rational and the occult, as well as physical national boundaries. Other recurring themes include time and movement, and the relation between two opposites—such as hot and cold, life and death, man and animal.
Rollof’s art has been shown all over the world, including at Documenta IX in Kassel, Germany in 1992, at the Venice Biennale of 1999, and at Mexico City at MUAC in 2009. Rollof was born in 1961 and now lives and works in Stockholm. A richly illustrated catalogue is being produced in conjunction with the exhibition, which will be published this fall.
.
.
.
.
.
.
.
source: cfhill
Ulf Rollof´s art delivers universal truths that are heavily battered yet hopeful.

Where artists like Ernst Josephson, Lim-Johan and Carl Fredrik Hill created as a means of surviving the dark shadow of their illness, Ulf Rollof reaches after possibilities, escape routes and rays of light.

Kleptomaniac is the third in a trilogy of shows. The first was Cleptomania at Casa Maauad in Mexico City (2014), followed by Kleptomani at Galleri Andersson/Sandström in Stockholm (2014). The third and final instalment, Kleptomaniac, developed in Ventura, California, is now on exhibit at CFHILL (2016).
Ulf Rollof is also represented in a group show, Life Itself, (2016) at Moderna Museet in Stockholm, where he has exhibited several times previously. His work has been exhibited in important international shows including the Venice Biennale, Kiasma (Finland), MUAC (Mexico) and Documenta.
Kleptomaniac includes a series of paintings that are robbed of their colour by daylight, leaving only a monochrome facade. The backlit works dazzle in darkness, however, the colours more brilliant for their earlier concealment.

Rollof is also exhibiting a series of cardboard signs he bought from homeless people in the neighbourhood north of Los Angeles where he has his studio. Ulf Rollof grew up in comfortable material plenty, yet feels a compulsion to steal things he doesn’t need. For the homeless, the situation is reserved.

The show also includes bullet hole paintings, a recurring motif for Rollof in the past decade. This time he fired the bullets through antique overlaid glass, preserved for use in restoring stained-glass windows. The delicate beauty of the bullet hole patterns evokes an unexpected optimism, perhaps even suggesting an aesthetic path of salvation.