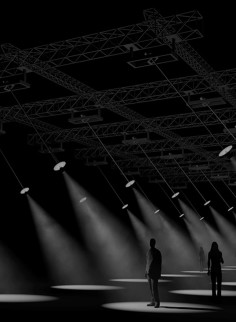 source: vimeo
Our Time (2016) is the latest large-scale installation by United Visual Artists investigating our subjective experience of the passing of time. How long is a moment? At what rate does time actually pass? The work joins a series of kinetic sculptures that began with Momentum (2013); an installation designed as a ‘spatial instrument’ that was to reveal the relationship between expectation and perception when intersected with a physical space.
Our Time defines a physical environment where pendulums swing at a pace apparently unhindered by the laws of nature and where no single time measurement applies. The installation combines movement, light and sound as a multi-sensory, multi-dimensional canvas the visitor can enter. Pendulums swing, each to their own rhythm, as time flows through the grid. With light tracing the path and sound its echo, the passing of time becomes almost palpable.
.
.
.
.
.
.
.
source: uvacouk

United Visual Artists (UVA) are an art and design practice based in London, creating work that lies at the intersections of sculpture, architecture, live performance and installation.

The studio’s origins in design for live performance led to a sustained interest in spectacle, the relationship between passive and active participation, and the use of responsive systems to create a sense of presence. As UVA’s work has broadened and evolved towards large-scale permanent works, it has become more influenced by the complex systems found in nature, while retaining its desire to emotionally engage the viewer and create a sense of communion.

With an open approach to collaboration, the members of UVA come from backgrounds in a wide variety of disciplines, and this cross-pollination of skills inspires new fields of exploration.

Their work has been exhibited at institutions and galleries including the South Bank Centre, the Wellcome Collection, Durham Cathedral, Riflemaker, Gazelli Art House and The British Library. Internationally UVA have shown in Barcelona, Beijing, Hong Kong, Melbourne, New York, Paris, Sao Paolo, St Petersburg, Taipei and Tokyo. Their designs for live performance have led to commissions for venues such as the Tate Modern turbine hall, the Serpentine Gallery and Madison Square Garden in New York. With public art works on permanent display in London, Bristol, Toronto and Istanbul.
.
.
.
.
.
.
.
source: ad110