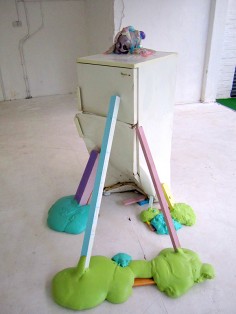 Born in Athens in 1982. Son of a Scottish woman. Lives and works in London. I am interested in the moment that stretches from “now” to the future. The interweaving web of images and possibilities connecting our world and the parallel. The trails of the heavy scent left from this point to tomorrow and right next to it. Dystopia. New life. Post-apocalypse. Growth. The descent. Love. Arsenic. Candies. And everything vibrating in between.
.
.
.
.
.
.
.
source: beerslondon

Vasilis Asimakopoulos work is preoccupied mainly with a fantastical world in a post-apocalyptic time. This vision of the future is used as a tableau upon which the artist projects mankinds anomalies as a being and the side effects of his existence in the present. Events and facts that trouble our humanity are stressed or underlined with a wry smile and salut. The memory of mans footprint in this world carries on as an ironic delirium, the possible artistic manifestations of which is Asimakopoulos main concern. Life after destruction, in all its complexity, but in a world where the natural is synthetic. The rebooting of the order of things in a place where the paradox manifests itself into normality. Vasilis has exhibited with Beers Contemporary at the London Art Fair / ‘Vestiges’ in January 2012, as well as in a group exhibition in February 2012, ‘When We Dead Awaken’.