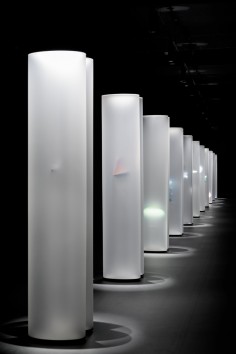 After taking up sculpture in the late 1960s, Pashgian became one of a group of artists in the Los Angeles area to experiment with new materials such as fiberglass, resin, plastic, and coated glass. For the current exhibition, Pashgian has created 12 molded-acrylic columns that fill an entire gallery. The sculpture creates an immersive viewing experience that invites meditations on the nature of material and light. To create the columns that constitute the sculptural installation at LACMA, the artist heated large sheets of acrylic until they became soft, like fabric. Then she wrapped each softened sheet around a wooden mold and allowed it to harden again. Each of the 12 columnar elements is made up of two such molded forms, which are then further enhanced. Despite their evident simplicity, the sculptures reveal their internal forms only on close inspection, seeming to hover above the floor as they focus, reflect, and refract light. Pashgian says, “I think of the columns as ‘presences’ in space—presences that do not reveal everything at once. One must move around to observe changes: coming and going, appearing and receding, visible and invisible—a phenomenon of constant movement. It touches on the mysterious, the place beyond which the eye cannot go.”
.
.
.
.
.
.
.
source: blogsgettyedu

Helen Pashgian (born 1934) was born in Pasadena, California, and completed her undergraduate work at Pomona College before heading to Boston University for her master’s degree. She returned to the Los Angeles area in the 1960s and joined a number of artists in exploring the artistic possibilities of industrial materials, such as plastics and resins. Pashgian focused on cast resin, creating intimately scaled, translucent objects that incorporate vibrant colors and precisely finished surfaces. The perception of these works shifts as the viewer moves around them, and they seem at times to be solid forms and at others to be dissolving into space.