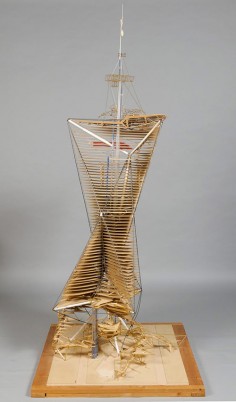 Vittorio Giorginis early architectural works allude to the topological features of continuous surfaces like the Möbius strip or the paradoxical, and non-orientable, Klein bottle. His signature compound curvature buildings such as the Casa Saldarini in Italy and the Liberty Center in New York State (unfinished and latter demolished) expose a long-lasting obsession with organic thin-shell manifolds. His book Spatiology: The Morphology of the Natural Sciences in Architecture and Design is an early work on biologically inspired architecture. It contains numerous sketches outlining the use of geometric procedures to generate manifolds and minimal surfaces as solutions to architectural problems.

In a later body of work he explores the use of lattice beams, spatial meshes and tensostructures, sometimes combining both asymmetric and symmetrical modules – good examples are his Walking Tall and Module Octet projects. Walking Tall was a skyscraper designed for New York in 1982-1983. The building, which was intended to rise to a height of more than 250 meters, employs asymmetric tetrahedral elements and is structurally reminiscent of utopian blueprints of the Soviet constructivist architectures of the 1920′s. Giorgini kept long-lasting friendships with the artists Jean Arp and Roberto Matta. The former artist may have left his biomorphic influences on Giorgini’s early topological architectures, while the latter artist’s dynamic three-dimension ‘inscape’ spaces may well be connected to Giorgini’s later angular works.
.
.
.
.
.
.
.
source: archpaper

For Vittorio Giorgini, work was a mission of moral integrity, an obligation similar in content to the commitment made by intellectuals and architects of the modern movement following World War II reconstruction: Le Corbusier, Leonardo Ricci, and particularly Kenzo Tange and Kisho Kurokawa, both members of the Japanese avant-garde of the 1960s.

Similarly, he shared a vision and, in some instances, long-lasting friendships with prominent artists like Andre Bloc, Frederick Kiesler, Jean Arp, Henry Moore, Isamu Noguchi, and his close friend, the Chilean Roberto Matta. He believed that knowledge, art, and architecture could and should contribute to the making of a freer society.

Toward that end, he conceived superstructures lifted above the ground to minimize human environmental impact. He designed intelligent habitats that explored space through a complex triangulation of engineered parts in different scales and applications, an explicit negation of traditional methods of construction. And he devised projects based on tension structures that contain multifunctional suspended platforms, with residential and commercial facilities, bridges, elevators, and transportation hubs.

Among these visions were his South Street Seaport Center, New York (1979); River Crane, Roosevelt Island, New York (1993); and the Messina Bridge Monorail in Italy (1998-99). These designs illustrated the principle that without physical boundaries, architecture becomes, at moments, pure growth, sharing a process associated with the biological constructions one can observe in nature.

Vittorio Giorgini worked in New York City since his arrival here in the early 1970s, both as a professor at Pratt Institute, where I met him in 1972, and as an architect. His residence-atelier in Soho became the meeting point for colleagues, artists, friends, and students attracted by his personality and generosity, all driven by the desire to be part of a unique personal and professional experience—an atmosphere of cultured humanity, Florentine refinement, and most of all, humor and irony.

Giuliano Fiorenzoli is an architect and professor at Pratt Institute.

I met Vittorio Giorgini in 1972 when he began teaching at Pratt. He was there until 1996, when he returned to Florence. A few years later, we received the funding for the Center for Experimental Structures at the School of Architecture, of which he was co-founder, along with John Johansen, William Katavalos, and myself. At the center, we have some of his images, including River Crane and an image of the Liberty Center in upstate New York.

The latter was a wire-mesh construction with compound curvatures that had the distinguishing topological feature of a continuous surface like the mobius strip, but here designed as a community center for the town of Parksville. This mesh structure, built in 1976 by Pratt students under Giorgini’s supervision, was going to be covered with concrete, but never was due to lack of funding. It is the first example of true topological architecture in the U.S.

The unfinished Liberty Center came on the heels of several topological and urban projects, including the Casa Saldarini, built in 1962 and conceived three years earlier. This house is the first contemporary topological building in architecture, and is rightfully in the process of being preserved as a historic landmark in Tuscany. Giorgini’s experiments in topology began with the vision of making buildings the way nature builds. When he met the Swiss cardiologist Hans Jenny in 1956, whose work was known from the pioneering images of vibrating powders and fluids under the term “Cymatics,” Giorgini envisioned building in that manner. This dream wasn’t realized, but the search for nature’s building methods lies at the heart of this approach.

Giorgini influenced generations of students through his teaching based on a rigorous design methodology that addressed urban problems mediated by structural morphology. At Pratt, he was like a school within a school, mustering a following that spilled into his professional work and contributed to the visualizations of some of his unique projects developed within his loft in Soho.

His work is in the permanent collection at two major institutions in France, the Pompidou Center and FRAC. He is the author of Spatiology: the morphology of the natural sciences in architecture and design (L’Arca, 1995). The book Vittorio Giorgini, La Natura come Modello by Marco Del Francia (Angleo Pontecorboli Editore, Firenze, 2000) is the most complete book on his work.