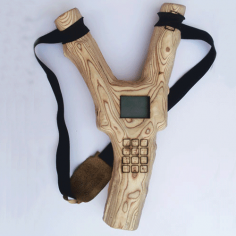 As a follow-up of the spread.gun performance in 2008, SMSlingshot was created as an extension of VR/Urban’s digital intervention activism. The installation features a handheld digital slingshot device for spreading information on public screens.

Having the conceptual idea of the device already in mind a year before, white nights 2009 at Kim? (Riga) was for us the right opportunity to actually create, finish and present our first prototype of the mobile textgun.
Like the spread.gun installation for the media facade festival 2008 (Berlin), the SMSlingshot is a truely tangible, embedded interaction device for linking digital data with people acting in urban (real) space.

Throughout the year 2010 we´ve been busy rethinking, recoding and redesigning the SMSlingshot. The interactive principle of typing a message, aiming with the laser and shooting it with a coloured splat stayed the same beside small formal changes. We tried to find new ways of designing, apart from pure CAD construction and classical milling. The process should be more tactile and moto skill inspiring. In this column you´ll find a little step by step documentation of the new SMSlingshot.

Because of the increased commercial interest of paving public space with digital advertising screens the need for an accessibel intervention devices seemed obvious and necessary. The wish and habit to comment (tag) the surrounding world is also an ancient and still vivant phenomena we try to preserve. Our concept of VR/Urban aims for claiming back urban space and and give the inhabitants a tool for occupiing urban screens. People shall not only remain as a passive audience, they must obtain the privilege and beside that the right tools to create their own multimedia content in the streets. The more and more mushrooming media facades, LED supplied walls and huge projections are interesting and worthy technical innovations for the people, but in contrast to the old fashioned posters in the streets, it is nearly impossible to create own content for these facades or even hang up your digital video.

We still believe that we live in a motion-media dominated public sphere. Our practical work with the SMSlingshot demonstrated to us very well that the people in the streets are in a need for visual reclaiming tools. They are increasingly frustrated and blunted from the strong image machinery surrounding them in everyday life. The way of passive perception leads and keeps the people in a consumer role. No uprising included or comment allowed!
Our basic idea of hitting urban media screens didn´t really worked out. Too strong surveillance systems, to much criminalisation of in fact visual activism. The screens are also even too bright to cross them with light. We would have not won this contest of the strongest projection technology. So we moved a bit.

The SMSlingshot is an autonom working device, equipped with an ultra-high frequency radio, hacked arduino board, laser and batteries. Text messages can be typed on a phone-sized wooden keypad which is integrated in the also wooden slingshot. After the message is finished, the user can aim on a media facade and send/shoot the message straight to the targeted point. It will then appear as a colored splash with the message written within. The text message will also be real-time twittered – just in case.

In the not yet digitalized streets and places we had set up a projector and our SMSlingshots and gave the people the opportunity to hit the walls with their messages. It is important, but not that essential to cross existing screens. Going for walls, shows the people that they can articulate in the same way as big advertisers do. We also recognized that the metaphor of the slingshot is practical to spread the idea of reclaiming apace.

For the hardware and caseing design we made several mockups to find ergonomic shapes, sufficent space to fit in the electronic parts and architypical form of a slingshot. Because of the high amount of technical equipment stuffed in the slingshot, we had to try different model sizes and various arrangements of the parts.

Next to the modelling process a lot of sketches have been done in order to foster certain elements in the mockups that we were not able to model in a physical manner. The layout of the keypad had to be shrinked down to a minimum of space, and the Arduino PCB had to be hacked down to become as small as possible.

For making the new SMSlingshot version we decided to change certain steps in the design process. What stayed the same is the fact, that it has to be mostly rapid prototyped in the end. For that reason everything from case to PCB have to be rationally and parametrically constructed. But we do not want to construct, we want to design. The first SMSlingshot looked and felt good, but was too much „design“. So we changed the soft and comfortable CAD environment and went out in the woods and collected loads of Y-shaped branches for formal inspiration. With these very low complex tactile prototypes, we´ve been able to make ergonomic studies and see which weight balance might be the best.

To get the geometries of the slingshot case from the computer screen to the real world, we used a five axe milling machine to cut the shape out of a plywood block. For us it was especially important to use real materials and real shapes. Wood has so many tactile and haptic qualities and is the typical material to built slingshots from. For prototyping purposes we created two models, one with a lot of free space inside for having various opportunities to place the components and one with less assembly options and tighter fit to avoid the components from bouncing around inside.
For creating the milling opereations we used the Cimatron8 software.

Then we took the four best branches to the 3D scanner and created four virtual branches. These mesh based models were imported to the very implicit and intuitively usable 3D-Coat software. In combination with a sketch-tablet it was possible to modify the virtual branch like you would grave it. This very natural way of CAD modelling really helped us to keep the natural touch of the original branches.

YOU as a designer might already know: Nothing fits at the first time ;) So Boscij needed to have his hands on the readymade prototype. Some coffee and cigarrets later, everything fitted slick and smooth.

After resizing and mashing up different branches to the perfect SMSlignshot case we exported the mesh to rhino split the case and exactly set all the inwards, such as display, antenna, modem, batteries, laser, switches and PCBs.

In the early phase of the SMSlingshot development, it was not quite clear how the text entry should be done. We experimented with a jog-dial (rotary encoder), arrow keys, virtual cursor, matrix keyboards, etc. The problem of text entry is not a trivial one, since it is a compound problem. One has to consider the software, hardware and also the human itself. Should the user type with one thumb, thumb and index finger, index finger, two index finger or two thumbs? Also the software needs to consider the different modes. Mobile Phones for example use predictive methods to suggest words one might want to type. But if you consider implementing automatic text completion new problems arise. No one of us can speaks Latvian and licensing a prediction algorithm would definitely blow our budget, not to speak about memory problems.

The resulting file was then CNC milled from plywood and ash tree. The wooden keypad was laser engraved and cut which created some serios connectivity hassles. To place an organic shaped object in a laser router and exactly cut what you want is very complicated because of different heights and CAM tolerances. Anyway, there is still a lot of sanding and surface work, because of a natural working material. Wood reacts on humidity, temperature and pressure so it is never overall perfect. But it matched to our new formal concept of keeping the natural look of a branch.

However, most of the technical problems are like in every software project self made. So we kept to the agile maxime functoning prototype over never ending planning and discussing. The development process anyway is iterative, so what?
In order to manage the iterative process, most of the slingshot parts existed multiple times. We had one development system and a working system. Ultimately one should have three concurrent systems for development, testing (release candidate) and deployment (the bug free version of a system). However, budget was short so we had to compensate that with braveness and ingenuousness.

Doing our 2nd iteration also made our electronics more robust. Testing is essential, because if the device fails, the intervention fails. However, currently we produced four devices that can work at the same time.

Fitting all the electronic parts into the slingshot was quite a difficult task. Especially the power sources took a lot of space within the case.

Having the SMSlingshot ready to sling, bags were packed and taxi ordered.

Our intervention took four hours and people loved it. It was very nice to see how people handled the artifact. It was a mixture of familiarity, intimacy and expresivness. The act of occupying a part of the facade with your personal virtual message produced a lot of joy for most of the people. Also the act of getting the device, typing a message, pulling and releasing the slingshot and watching the impact of the splash followed a development of suspense like one might find in a story of a book. Even twists and turns were observed. :)

To keep the concept of a natural interface we also changed the appearance of the projected Splats on the wall. We filmed real colour bags hitting white walls to naturally digitalize the splash-moment and the dripping. The interface now looks much more organic and real. It gives more vivant impression on the wall. We also changed the fonts from pixeled to condensed, made them bigger and white. It is now much better readable and looks fancier!

With the three new SMSlingshots we hit the road for a little world tour starting in Sao Paulo over Berlin, Liverpool to Madrid, Palma, Eindhoven and Vienna.

For now we would like to thank all the people who mad this possible. We really liked the venue in Riga an we will certainly come back.

The most outstanding performance was end of August during the European Media Facades Festival. We created a joint broadcasting event that enabled people in two different cities to communicate via an urban media screen. So we split up teams and sent two people to the FACT facade in Liverpool and two of us to the Collegium Hungaricum in Berlin. During the night people were shooting messages (still the old interface) to the screen awaiting an answer from people with SMSlingshots in Liverpool. This worked remarkable good and empowered the people to rethink their communicative behaviour. And of course, it was a load of fun involved. People were laughing and cheering all the time. We didn´t had to care about the SMSlingshots because the people were handing it out and explaining it themselves.