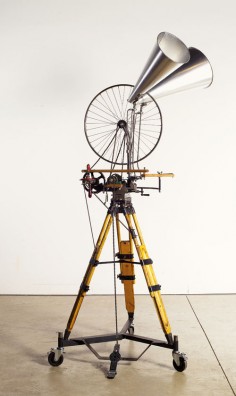 William Kentridge was born in Johannesburg, South Africa, in 1955. He attended the University of the Witwatersrand, Johannesburg (1973–76), Johannesburg Art Foundation (1976–78), and studied mime and theater at L’École Internationale de Théâtre Jacques Lecoq, Paris (1981–82). Having witnessed first-hand one of the twentieth century’s most contentious struggles—the dissolution of apartheid—Kentridge brings the ambiguity and subtlety of personal experience to public subjects that are most often framed in narrowly defined terms. Using film, drawing, sculpture, animation, and performance, he transmutes sobering political events into powerful poetic allegories. In a now-signature technique, Kentridge photographs his charcoal drawings and paper collages over time, recording scenes as they evolve. Working without a script or storyboard, he plots out each animated film, preserving every addition and erasure. Aware of myriad ways in which we construct the world by looking, Kentridge uses stereoscopic viewers and creates optical illusions with anamorphic projection, to extend his drawings-in-time into three dimensions. Kentridge has had major exhibitions at San Francisco Museum of Modern Art (2009); Philadelphia Museum of Art (2008); Moderna Museet, Stockholm, (2007); and the Metropolitan Museum of Art, New York (2004); among others. He has also participated in Prospect.1 New Orleans (2008); the Sydney Biennale (1996, 2008); and Documenta (1997, 2002). His opera and theater works, often produced in collaboration with Handspring Puppet Company, have appeared at Brooklyn Academy of Music (2007); Standard Bank National Arts Festival, Grahamstown, South Africa (1992, 1996, 1998); and Festival d’Avignon, France (1995, 1996). His production of Dmitri Shostakovich’s opera, The Nose, premiered in 2010 at the Metropolitan Opera, New York, in conjunction with a retrospective organized by San Francisco Museum of Modern Art and the Museum of Modern Art, New York. William Kentridge lives and works in Johannesburg, South Africa.
.
.
.
.
.
.
.
source: studiointernational

Drawing is pivotal to all of Kentridge’s art practice. In the late 1980s, he became an internationally acclaimed artist when his animated charcoal drawing films were shown using a homemade animation technique that he describes as “stone-age film-making”. Editor and co-author Lilian Tone describes the artist’s method: “This process involves the sequential reworking of a set of charcoal drawings pinned to the wall and positioned in a fixed relationship to the camera. Rather than using a different drawing for each frame, as is seen in conventional methods of cel animation, Kentridge continuously reworks each drawing in an obsessive ritual of addition and subtraction, accumulation and erasure. Evocative iconographies dissolve into crude marks that operate at the limit of discernibility, producing powerfully expressive effects.”

Kentridge first studied politics and African studies at the University of Witwatersrand in Johannesburg from 1973 to 1976, before studying fine art at Johannesburg Art Foundation from 1976 to 1978. His interest in theatre began at university and has continued throughout his career. It informs the dramatic and narrative character of his art as well as his ability to link drawing and film. As a draughtsman, his work in pastel and charcoal is expressionistic. From 1989 to 1996, Kentridge made an important cycle of films that allegorised South Africa’s political upheavals. His work can be seen to belong to the satirical tradition of Honoré Daumier, Francisco Goya and William Hogarth, although the artist is ambivalent about his European art historical heritage as his search for identity draws on his own German, Jewish and Lithuanian roots. He uses the politically potent images from the 19th century as a framework for contemporary African subjects in the context of South Africa’s Resistance Art movement of the 1980s.

In drawing in the South African landscape, he turns his back on the most picturesque view to capture an honest fragment of the landscape. His recent drawings of isolated trees, in black ink brushed on old encyclopaedia pages, evoke both the doomed grace and the fetishisation of pre-colonial Africa. Given Africa’s cycles of violence and colonial domination, an authentic South African landscape no longer exists. Kentridge takes the role of artist as mediator through which the hidden trauma of the land can surface organically in the process of his work, which itself involves building, unbuilding and rebuilding. Landscape is thus pivotal to this, an essentially political art. In October 2001, in a lecture at the Chicago Museum of Contemporary Art, reprinted in Fortuna, Kentridge observed: “All calls for certainty, whether for political jingoism or for objective knowledge, have an authoritarian origin relying on blindness and coercion, which are fundamentally contrary to what it is to be alive in the world with one’s eyes open.”

It is drawing that underpins all of Kentridge’s projects, with both the process and the finished images playing an important role in his creative act. “It is only when physically engaged on a drawing that ideas start to emerge. There is a combination between drawing and seeing, between making and assessing, that provokes a part of my mind that otherwise is closed off,” he says.