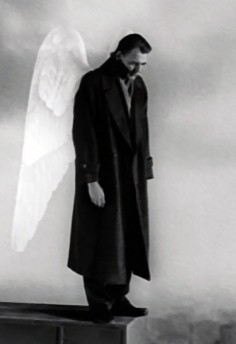 1987, West Germany/France, 128 min.
Director: Wim Wenders
Cast: Bruno Ganz, Solveig Dommartin, Otto Sander
The sky over war-scarred Berlin is full of gentle, trenchcoated angels who listen to the tortured thoughts of mortals and try to comfort them. One, Damiel, wishes to become mortal after falling in love with a beautiful trapeze artist, Marion. Told from the angel’s point of view, the film is shot in black and white, blossoming into color only when the angels perceive the realities of humankind. Widely acclaimed from famed German director Wim Wenders comes the visually entrancing film that earned Best Director when it screened at the 1987 Cannes Film Festival. Introduction by Jeffrey Grossman (U.Va.).
.
.
.
.
.
.
.
source: techhive

Now for the women’s films. Director Wim Wenders’ Wings of Desire (1987) was shot in both German and English, and both black-and-white and color, telling the quiet, moody, romantic story of an angel (Bruno Ganz) who falls in love with a human trapeze artist (Solveig Dommartin) and must decide whether to give up everything to be with her. Peter Falk is terrific as a human actor who helps out. It’s a remarkably intelligent, deeply-felt movie that avoids most romance clichés. (A poor remake, City of Angels, embraces all those same clichés.) Nick Cave and the Bad Seeds perform on stage in one scene.
.
.
.
.
.
.
.
source: criterion

Wings of Desire is one of cinema’s loveliest city symphonies. Bruno Ganz is Damiel, an angel perched atop buildings high over Berlin who can hear the thoughts—fears, hopes, dreams—of all the people living below. But when he falls in love with a beautiful trapeze artist, he is willing to give up his immortality and come back to earth to be with her. Made not long before the fall of the Berlin wall, this stunning tapestry of sounds and images, shot in black and white and color by the legendary Henri Alekan, is movie poetry. And it forever made the name Wim Wenders synonymous with film art.
.
.
.
.
.
.
.
source: forumjournalorg

Wim Wenders’ Wings of Desire is a work that cinematically explores discourses of history and memory in postwar Germany and, since its 1987 inception, most examinations of the film have centered on these aspects. However, little attention has been given to the significant role of technology in Wenders’ film. Emphasized not only in the opening scenes but also throughout the rest of the film, transportation technologies such as airplanes, cars, and trains link the spaces of the city and therefore lie at the heart of Wenders’ Berlin portrait. Furthermore, the self-reflexive nature of Wenders’ work posits film as the quintessential technological medium of storytelling and history, and my paper will thus link theories of technology and perception with those of memory and history.

I will begin my paper by elucidating Paul Virilio’s and Jean Baudrillard’s theories of speed and spatiality in postmodern society and will link these theories with the portrayal of transportation technologies in Wings of Desire. The next part turns to Walter Benjamin’s model of space and memory as a more optimistic approach to spatiality in Wenders’ Berlin portrait, and this latter model will prove to be highly significant in my final analysis of Wenders’ film. In particular, I will explore the film’s emphasis on spaces of absence and the way in which this emphasis reveals a model for a new kind of perception and a model for narrating the past. The last section of my paper will stress the way in which Wenders mediates between the communication technologies of transportation and film, and further, between modernity and postmodernity. Ultimately, the technological perception created by transportation technologies (and theorized extensively by postmodernist theorists Baudrillard and Virilio) is redeemed by the medium of film because of its ability to overcome what film theorist Siegfried Kracauer calls the “blind spots of the mind” (53).