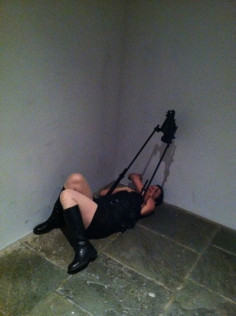 source: whitneyorg
New York–based artist Xavier Cha incorporates video and installation in performances that play with multiple perspectives and deferred access, reflecting our fractured contemporary experience. For her new work Body Drama, Cha transforms the gallery into a mysterious setting in which an actor performs while wearing a body-mounted camera. In between performances the resulting footage is projected on the wall, offering viewers two versions of the same experience, both of which center on disorienting psychological and physical space.

Xavier Cha was born in Los Angeles, CA, in 1980; she currently lives and works in New York, NY. Cha received her B.F.A. from the Rhode Island School of Design in 2002 and her M.F.A. from the University of California, Los Angeles in 2004. Her performance-based work has been shown in solo exhibitions at the Contemporary Art Museum, St. Louis (Two-Way Mirror, 2010) and Taxter & Spengemann Gallery, New York (The Third I, 2009, Voicedoor, 2008, and Holiday Cruise!, 2006). Group exhibitions include The Absolutely Other, 2010, The Kitchen, New York; Convention, 2009, Museum of Contemporary Art, North Miami; and In Practice, 2006, The Sculpture Center, Long Island City.
.
.
.
.
.
.
.
source: blogopeningceremony
XAVIER CHA’S ‘BODY DRAMA’ AT THE WHITNEY
BY MORGAN REHBOCK | WED. DECEMBER 31, 1969 | 7:00 PM | CULTURE CLUB
When I walked into Xavier Cha’s new performance exhibition “Body Drama” at the Whitney Museum, I found a crowd of people huddled around a woman in serious distress. “Why aren’t they helping her out?” I wondered. I wasn’t totally sure whether it was socially acceptable to join the spectators in watching. Or was this was a private situation they were dealing with? I quickly realized that this was the performance, and the woman was an actress.

“Body Drama” transforms the Whitney’s first floor gallery in to a theater of sorts, with a rotating cast of actors prompted by Cha. The actors deal with their deepest feelings while navigating the physical space of the gallery with a body-mounted camera recording their experience. The videos are then screened following their respective performances. The effect is a universal sense of sympathy – we’ve all been there before, lost and confused in the alien spaces of the modern world. Here are some pictures from Wednesday’s opening.
.
.
.
.
.
.
.
source: artinamericamagazine
Xavier Cha is a young New York-based artist who has garnered attention for works involving live performance. For her 2011 installation Body Drama at the Whitney Museum, Cha employed actors to perform states of anguish while a body-mounted camera captured each wearer’s face in close-up; the recordings were then played back following each making. But in Cha’s recent solo presentation, the action has moved completely into the apparatus.

The show consisted of a single work: a four-channel untitled video (2012) displayed on four flat-screen televisions, spaced evenly around the walls. Each monitor played a series of “portraits,” brief segments featuring a single shot of a face filmed against a white background. Each face was accompanied by its own soundtrack, consisting of low hums and buzzes created by sound engineer Jonathan Coward. The same faces appeared at intervals on different screens, so that they seemed to jump around the room.

The subjects usually stared directly into the camera, rarely blinking. Their blank stares have been related by some critics to the slack-jawed look of today’s computer user, mesmerized by any number of possible distractions or engrossed in large quantities of information. If the work records an interaction between subject and machine, there is an utter lack of distinction at the level of affect between boredom and interest. When Cha presents an image of the back of a head without explanation, the result is both frustrating and unsettling, although also subtle enough to pass by without comment. In another instance, a woman, whose disheveled hair and glassy eyes cue associations like “strung-out,” speaks the word “fox.” This is the only word uttered, and it comes as a shock even though it lacks any meaningful message. These disruptions to the standard format of the work do not serve to distinguish their subjects, but instead help to establish the work’s status quo of non-incident.

That nothing much happens seems to be the point. Cha has referred to her performers here as “empty vessels,” and in appearance, they are both anonymous and familiar. They are all relatively young, healthy and attractive, although their skin color and gender vary. They were all filmed in Baltimore, where Cha cast the piece with Coward’s help in order to find “a diverse spectrum of anonymous faces,” according to the gallery. Instead of the professionals that Cha has worked with in the past, here she chose non-actors who were filmed while in the midst of what she calls “an out-of-body experience,” although she has not elaborated on how this state was achieved. More significantly, whatever each figure experienced while being filmed remains completely opaque to the viewer.

In a printed e-mail exchange between the artist and her gallerist that serves as the show’s press release, Cha points to a psychic dimension emerging from the contemporary entanglement of bodies and machines. She describes contemporary technological society as “a schizophrenic state of psychotic simultaneity.” The phrase is suggestive, and aligns Cha’s concerns with those of other young artists like Ryan Trecartin and Frances Stark. But the unspeaking portraits also have an obvious and compelling connection to Andy Warhol’s “Screen Tests,” which established the genre of the filmic portrait in the mid-1960s. Where the “Screen Tests” recorded the very process of becoming an image, and Warhol’s subjects sometimes seem to come undone in front of the camera, Cha’s contemporary analog suggests how frictionless that process has become.